Earlier this month more than 300,000 members of Britain's largest nursing union began voting on taking strike action in a dispute over pay . 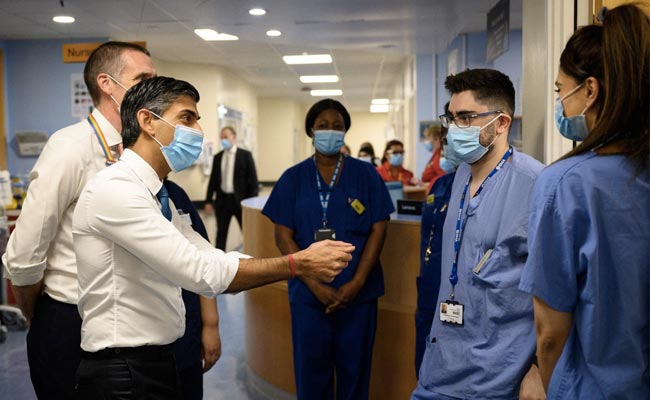 British Prime Minister Rishi Sunak was challenged by an elderly patient at a London hospital on Friday who told him it was "a pity" the government did not pay nurses more and he must "try harder".

Earlier this month more than 300,000 members of Britain's largest nursing union began voting on taking strike action in a dispute over pay which is lagging soaring levels of inflation, the biggest ballot in its 106-year history.

The female patient told the prime minister he must "look after" the state-run National Health Service (NHS) and do more to support nurses, during a visit to a hospital in Croydon in south London.

Sunak became Britain's third prime minister in two months this week and his government is drawing up spending cuts and tax rises to fill a large hole in the public finances.

When Sunak asked the woman whether the staff had looked after her "really nicely", she replied: "They always do. It is a pity you don't pay them more."

Sunak told her his government was trying, before she said: "No you are not trying, you need to try harder."

The prime minister responded: "Right, I will take that away. They are a very nice team here."

The Royal College of Nursing said it had been forced to ballot staff about a strike after years of real-terms wage cuts deterred people from joining the profession, leaving huge staffing gaps across the health service.

The NHS, which has provided healthcare free at the point of use since 1948, is popular with voters and accounts for about a third of government spending on public services.

However, the COVID-19 pandemic increased demand from patients, with record numbers waiting to start routine treatment and some patients left languishing in ambulances, outside hospitals or on trolleys for hours waiting for a bed.