"If it's Goya, it has to be good," Ivanka Trump, daughter of Donald Trump, tweeted the company's slogan in English and then repeated it in Spanish on Tuesday night. 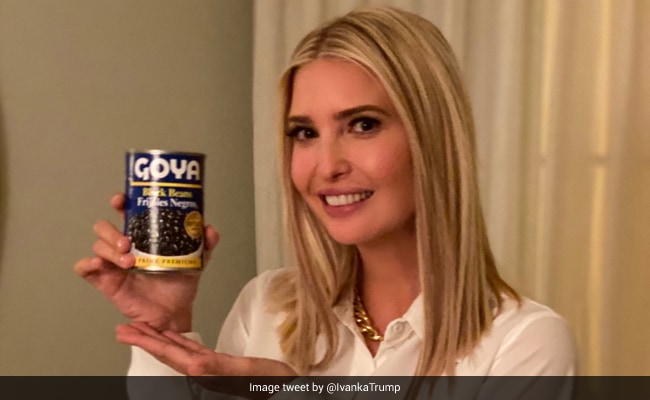 In Ivanka Trump's tweet, she is seen holding a can of Goya's black beans

"If it's Goya, it has to be good," Ivanka, daughter of Donald Trump, tweeted the company's slogan in English and then repeated it in Spanish on Tuesday night.

If it's Goya, it has to be good.
Si es Goya, tiene que ser bueno. pic.twitter.com/9tjVrfmo9z

Ivanka Trump's tweet, in which she is seen holding a can of Goya's black beans, garnered over 35,000 retweets and 62,000 likes in little over 4 hours.

However, her comments could violate government ethics rules prohibiting the use of public office to endorse products or advance personal business gains. The U.S. Office of Government Ethics did not immediately respond to Reuters' request for comment.

White House adviser Kellyanne Conway was criticized in 2017 after she appeared to break similar federal ethics rules when she said on television that Americans should "go buy Ivanka's stuff."

The White House did not take any disciplinary action against Conway even after calls from the ethics watchdog.

In an interview with Fox News last week, Conway decried the Goya Foods controversy. "It's just a shame that people make everything so politicized, including food," she said.

The hashtags #Goyaway and #BoycottGoya trended on Twitter after Robert Unanue, chief executive officer of the New Jersey-based company, appeared with Trump at the White House on Thursday for the signing of an executive order creating an advisory panel aimed at spurring Hispanic prosperity.

"We're all truly blessed at the same time to have a leader like President Trump who is a builder, and that's what my grandfather did," Unanue, who is the third generation of his family to run the business, had said.

Trump himself weighed in on the dispute late on Friday, writing on Twitter simply: "I LOVE @GoyaFoods!"