The president's iteration of white tie at the state banquet at Buckingham Palace was, in a word, a mess. The waistcoat was too long and too tight. 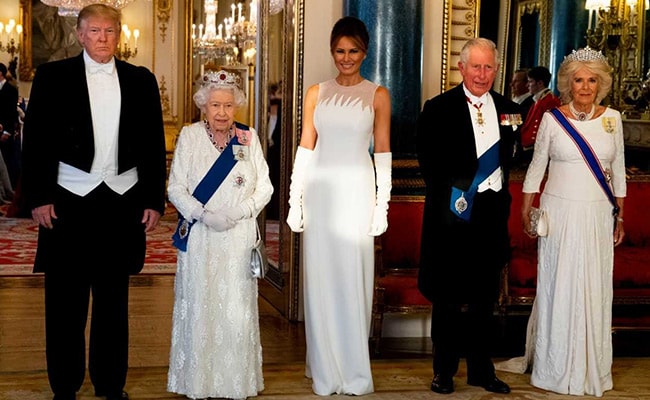 US President Donald Trump arrived in Britain for a state visit on June 3.

The president and first lady have landed in Ireland. They have left the pomp and pageantry of England. Melania Trump has removed her Phillip Treacy hat. The president is once again in a business suit and his too-long ties. But like an American whose rough vowels suddenly get all posh and polished in the presence of a British accent, the president seems to have absorbed a hint - just a hint - of British precision: He has buttoned his jacket.

So little, so late.

Like the contrails of a jet liner, the first couple leave behind a photo spread of face-framing hats, designer evening gowns, one Gucci postcard frock, one pussybow blouse and one spectacularly ill-fitting example of full evening dress.

Fashion is diplomacy and so what did this wardrobe say?

For any man to bungle white-tie dress - something so regimented, so steeped in tradition, so well-documented - he must be a man who doesn't bother with the details, who doesn't avail himself of ready expertise, who refuses to be a student of history or even of Google. White-tie attire is more science than art. The fit of the tailcoat is just so. Great flapping yards of the white waistcoat are not meant to hang below the jacket. The sleeves should not stretch to the base of the thumb. The jacket is not to be buttoned. And so on. White tie is fact-based. One cannot fudge it. One does not make white-tie decisions based on one's gut, lest one end up with the gut overly exposed.

The president's iteration of white tie at the state banquet at Buckingham Palace was, in a word, a mess. The waistcoat was too long and too tight. The tailcoat did not fit. The trousers were voluminous. And the man himself looked so ill-at-ease in the whole unfortunate kit that his awkwardness loomed over him like Pig-Pen's dust cloud.

The visual was of a man who looked out of place - by his own hand - at a moment of high formality and ceremony intended to convey comity.

The first lady, in contrast, was a zealous student of propriety and occasion throughout the England visit. She tried mightily to make a picture-perfect impression and whether one feels that her choices lacked subtlety or simply were not one's taste, each ensemble reflected the formality of the situation, acknowledged tradition and yet remained true to the personal sensibility that she has displayed these past few years.

There were shirt dresses cinched tight with a belt, plus pussybow blouses, stiletto heels, sharp shoulders and at least one evening gown with a cape-style bodice. These are her signatures and they create a look that is controlled and reserved. And with the addition of broad-brimmed hats tilted to the side - including one by her regular collaborator Herve Pierre - she often looked like she was a fashion trooper on a stealth mission.

She pulled out fashion's big guns. As far as one could tell, there were no up-and-coming designers represented in her public wardrobe. The brands roll off the tongue like the directory at the Mall at Short Hills: Dolce & Gabbana, Dior, Gucci, Burberry and so forth. There were moments when her homage to England rang as simplistic, such as when she departed the White House in a Gucci dress with a souvenir print featuring pictures of landmarks such as Big Ben, along with a double-decker bus or two.

Her Burberry archive print blouse is a swirl of gold cords and medals with the word "society" emblazoned on the back and front. Her choice of the quintessential British brand was her most pointed homage to her hosts. Otherwise, there was a Celine trench coat, an Hermes Birkin bag, a Dolce & Gabbana white dress trimmed in navy and a white coat by the American label the Row. In her attire, the public saw allusions to Princess Diana and to Eliza Doolittle, which is to say that people saw a version of British style that has come to dominate the popular imagination even if none of those clothes had been conjured up by an actual British company. The first lady's scarlet Givenchy evening gown at Winfield House was an indirect nod to British design talent - creative director Clare Waight Keller is British and also designed the wedding gown of Meghan, Duchess of Sussex.

The first couple brought along all of their adult children - Don Jr., Eric, Ivanka and Tiffany. The boys looked about as comfortable in their white tie as did their father. Their ensembles were only slightly better fitting.

Ivanka Trump, who is also an adviser to the president, chose a prim aesthetic for her stay in England. Her clothes oozed classic femininity, with the pleated skirts and the full-skirted pale blue Carolina Herrera gown she wore to Buckingham Palace.

Her style is studiously gentle and without hard edges. She is the soft-focus daughter. The one who is always present, always at the table. Seen, even heard, but not quite defined.

If there was any visual story of the Trump clan in England, it is one that is broken up into bits. Their fashion choices speak for them and about them: a respectful hat and a beautiful Dior gown; one daughter drifting along in a cloud of frothy silk and chiffon, another one weighed down in unseasonably dark burgundy and positioned on the edges of a group picture. The sons of privilege are miniatures of the father as they stand stiffly in their white tie, Instagramming their not-so-humble bragging. The son-in-law, Jared Kushner, with his lineless face, toddler cheeks and astute tailoring, was there but not there.

And the president, at the center of it all - was the man who could have done so much better.

(Except for the headline, this story has not been edited by NDTV staff and is published from a syndicated feed.)
Comments
Donald TrumpMelania Trump