Won't Go Or Will Walk Out If Meeting With Kim Jong Not "Fruitful": Trump

Donald Trump also said his administration is negotiating with Pyongyang for the release of three Americans who remain captive in the North Korea. Donald Trump said his administration is working "very diligently" on the issue of Americans. (File)

Palm Beach, Florida: President Donald Trump voiced optimism Wednesday about his potential summit with North Korean dictator Kim Jong Un, but he vowed to cancel the meeting or walk out if there are signs it "is not going to be fruitful."

Trump also said his administration is negotiating with Pyongyang for the release of three Americans who remain captive in the North and suggested that they could be freed as part of a diplomatic thaw between the two nations, which do not have formal government relations.

"If I think it's a meeting that is not going to be fruitful, we're not going to go," Trump said at a joint news conference with Japanese Prime Minister Shinzo Abe, after two days of meetings at Mar-a- Lago, the president's winter resort. "If the meeting, when I'm there, is not fruitful, I will respectfully leave the meeting."

He added that he intends to remain "flexible" as a negotiator, a strategy he credited for laying the groundwork for the historic summit, which would mark the first time a sitting U.S. president has met with a North Korean leader.

Trump and Abe hoped to emerge from their meetings here with a show of unity ahead of a series of high-risk diplomatic initiatives in East Asia, starting with a summit next week between Kim and South Korean President Moon Jae-in. Trump has told aides to schedule his summit with Kim in late May or early June, and CIA Director Mike Pompeo made a secret trip two weeks ago to meet Kim in Pyongyang. In a morning tweet, Trump confirmed Pompeo's trip and said the planning was going "very smoothly." 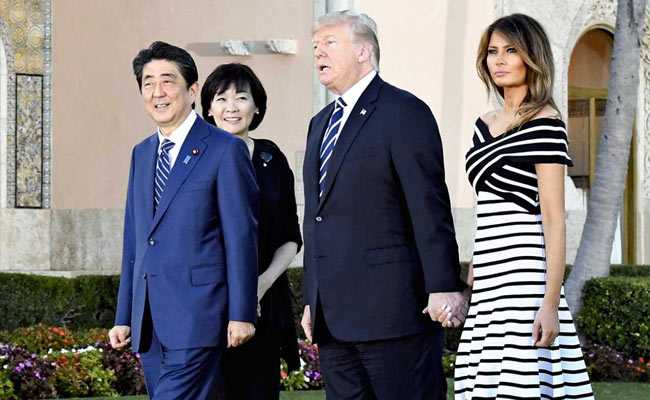 But the preliminary talks have increased the pressure on Trump to start showing results. Abe emphasized that the North should not be rewarded on the world stage simply for being willing to talk. And Trump was asked at the news conference why Pompeo, whom he has nominated to become secretary of state, appeared to come home empty-handed - without freeing the three Americans or announcing any other North Korean concessions.

Trump said his administration is working "very diligently" on the issue of the Americans. And he emphasized that he also intends to press Kim on the unresolved cases of at least 13 Japanese who were abducted by North Korean agents in the 1970s and 1980s, one of Abe's top priorities and an issue of intense emotional power in Japan.

As he has before, Trump raised the death of Otto Warmbier, an American college student who died last summer shortly after he was released in a coma after 17 months of captivity in North Korea.

"The abduction issue is important to me," Trump said, noting that Abe had stressed its importance at a dinner with their wives at Mar-a-Lago a night earlier. "His level of enthusiasm was unbelievable. I said right then and there that we'd work very hard on that issue - trying to bring these folks back home."

Abe responded that Trump's pledge was a "very encouraging comment" and "massively powerful" for the families of the abductees.

Recognizing the stakes, Trump, with his trademark rhetorical flourish, called the summit a "historic moment - and possibly beyond that, if it works out."

He even went so far as to say that the United States aims to end the development of nuclear weapons "ideally in all parts of the world. It's a goal for all of us to hope for and to cherish."

The news conference came at the end of a day in which the president and his aides worked to promote Pompeo's candidacy to become the nation's top diplomat. The former conservative Republican congressman is facing criticism from Senate Democrats, as well as Republican Rand Paul, Ky., over his hawkish foreign policy views, though several offered grudging approval of his trip to Pyongyang.

Kellyanne Conway, a senior White House adviser, said Trump's confidence in entrusting Pompeo with a leading role in the summit planning shows that the president already considers him the "top diplomat," even though it is possible Pompeo will not receive the endorsement of the Senate Foreign Relations Committee ahead of a potential floor vote.

Trump told reporters Wednesday that he expects Pompeo to be confirmed.

"I think Mike Pompeo is extraordinary," Trump said at the lunch with Abe.

"I think he will go down as a great secretary of state," Trump said, adding that he thinks Paul will support Pompeo.

"Rand Paul has never let me down," Trump said. "I don't think he will let us down again."

Paul is the only Republican who has publicly opposed Pompeo.

White House aides hoped the idyllic setting in Mar-a-Lago, with warm, sunny skies and familiar surroundings the president has found more comfortable than the White House, would help Trump focus, after a series of scandals and West Wing personnel changes that have occupied this thoughts - and Twitter account.

Trump and Abe played a round of golf Wednesday morning, and Trump tweeted a photo of the two leaders, dressed in golf clothes and hats, posing with their thumbs up.

But the president clearly could not completely disengage from the daily political combat on the Russia investigation that has defined his time in office. At the news conference, Trump took the customary two questions from American reporters and two from the Japanese media - but then returned to the lectern to answer a third one about why he appeared to reverse himself on issuing more economic sanctions on Russia.

The president repeated his oft-employed assertion that "no one" has been tougher on Moscow than he has.

"For the media, it's never tough enough . . . because that's their narrative," he said.

Abe, mired in his own political scandal in Tokyo that has worn down his approval ratings, sought to close the gap with Trump on North Korea strategy and a break in trade relations related to Trump's recent tariffs on steel and aluminum imports.

The Japanese prime minister appealed to Trump's ego, praising him for his leadership on North Korea and restating a series of pledges Trump has made to stand in solidarity with Japan over security threats in the region.

"Maximum pressure should be maintained," Abe said, referring to the economic sanctions the Trump administration has levied on Pyongyang. "And actual implementation of concrete actions of denuclearization will be demanded."

At Mar-a-Lago, Trump ordered the American flags lowered to half-staff Wednesday in honor of former first lady Barbara Bush, who died Tuesday, after reporters noticed the private club had not followed the president's directive the night before.

Trump opened his remarks at the news conference by paying homage to her and her family, including former president George H.W. Bush, whom he noted had been married to Barbara for 73 years.

Promoted
Listen to the latest songs, only on JioSaavn.com
The Post's Philip Rucker in Washington contributed to this report.