Trump Delays Release Of Some JFK Files Until 2021, Bowing To National Security Concerns

Trump gave a deadline of April 26 to release documents related to the investigation into John F. Kennedy's assassination by Lee Harvey Oswald. 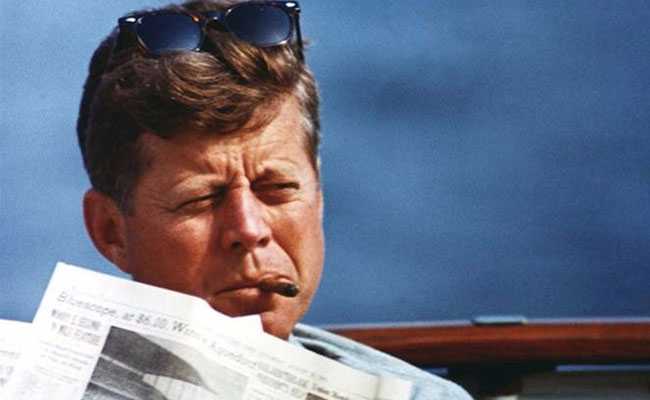 After President Donald Trump vowed last year to release all the long-secret files related to the JFK assassination, the administration announced Thursday that some documents will remain redacted until October 2021 for national security reasons.

In a White House memo, Trump said that the nation's intelligence community persuaded him to keep some parts of documents secret because their exposure could harm "identifiable national security, law enforcement, and foreign affairs concerns."

Trump gave the CIA, FBI and other agencies a deadline of April 26 to release documents related to the investigation into President John F. Kennedy's assassination by Lee Harvey Oswald on Nov. 22, 1963, in Dallas. Last year Trump, who once suggested Sen. Ted Cruz's father played a role in the assassination, promised he was going to release the entirety of the 5 million pages of records, most of which have been available since the late 1990s.

"Subject to the receipt of further information, I will be allowing, as President, the long blocked and classified JFK FILES to be opened," Trump tweeted on Oct. 21, 2017.

Six days later, he promised: "After strict consultation with General Kelly, the CIA and other Agencies, I will be releasing ALL JFK files other than the names and addresses of any mentioned person who is still living."


The president did authorize the disclosure of 19,045 documents that are available on the National Archives website. Of that batch, more than 15,000 documents - which had been released previously with varying degrees of redactions - still have blanked-out sections, according to a National Security Council spokesman. In most of those cases, the redactions are now fewer. The spokesman also said no more documents are being withheld in full under the section that falls within the public disclosure rules under the Kennedy Act.

Trump said the next deadline for release of more documents would be Oct. 26, 2021. "The need for continued protection can only grow weaker with the passage of time. . .," Trump wrote.

Jefferson Morley, a former Washington Post staff writer who edits JFKFacts.org, a website devoted to the Kennedy records, said in an interview that he was disappointed by Trump's decision to delay the full release for another three years and, possibly, beyond.

"Trump said that all the JFK files will be released, but the truth is that thousands of JFK files are still secret. The clear intent of Congress was to have these released last October and now we're talking about 2021," Morley said. "The point is that the CIA wants to keep this secret forever. It's a very clear statement of intent."

Morley also said that the Trump administration is not complying with the stipulations of the Kennedy Records Act, which requires that the administration provide declassified explanations for withheld documents.

On October 26, 1992, President George H.W. Bush signed the John F. Kennedy Assassination Records Collection Act. The law required that all the assassination records "shall be publicly disclosed in full and available" at the National Archives "no later than the date that is 25 years after the date of the enactment of this act." But the law did allow for postponements if the government was worried that harm to the military and intelligence communities "outweighs the public interest in disclosure."

Morley, who has been fighting the CIA in federal court for the last 15 years to obtain other Kennedy records, said he was quickly going through the 19,000 files that were released Thursday and came across redactions that made little sense to him. One document was an FBI report detailing an agent's interview of Oswald's brother Robert and mother Marguerite in April 1960. The July 1961 document refers to four confidential informants - code-named T-1, T-2, T-3, and T-4 - but their names are blacked out.

"This is a 57-year-old document," Morley said. "And the names are still being withheld. Why?"

Another document is a House Select Committee on Assassinations interview of Boris and Ann Tarasoff, two former contract employees with the CIA at the agency's Mexico City station in the run-up to Kennedy's assassination. The transcript's exchanges are mostly all there, except that Morley noticed one paragraph whited-out for reasons he could not ascertain.

"In a separate interview with Mr. Tarasoff on November 30, 1976, I learned that the photographic expert on station in Mexico City in 1963 September to November was Bob Zambernardi. Zambernardi's -"

And then the paragraph is whited out until it continues again here:

"Zambernardi was probably the man in charge of photographing the activities of both the Cuban and Soviet embassies in 1963."

At the same time, Morley did give credit to the government for taking documents that were once heavily redacted and lifting their veils. "There is some progress," he said. "Some significant material has been released today, but other significant redactions remain."

Rex Bradford, president of the Mary Ferrell Foundation, which tracks the JFK files, said he wasn't sure yet what had been withheld and needed to spend time scrutinizing the latest release of documents to see whether they contain a large or small amount of redactions. He said he did a quick "spot-check" and was surprised to see fewer whited-out sections than in previous releases.

"I checked a few dozen files, and there were certainly many with redactions, but they tended to be names and short phrases," Bradford said.

(This story has not been edited by NDTV staff and is auto-generated from a syndicated feed.)
Comments
John F KennedyDonald TrumpLee Harvey Oswald