Trump, Again, Casts Blame On Both Sides For Deadly Violence In Virginia

Appearing angry and irritated, Trump maintained that his original reaction was based on the facts he had at the time. Blame, he said, belonged on both sides. 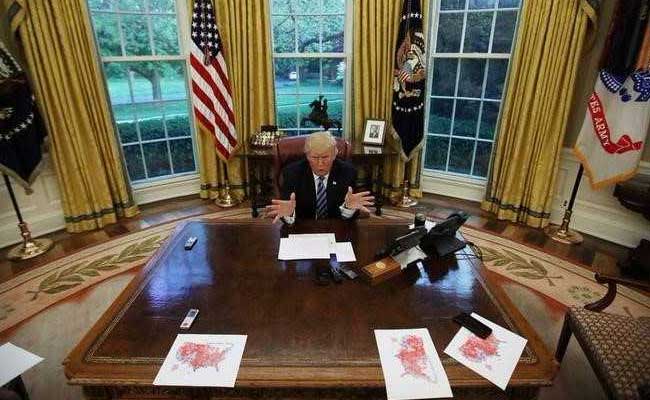 Donald Trump, drew sharp criticism from Republicans and Democrats for his response

NEW YORK: President Donald Trump insisted on Tuesday that left- and right-wing extremists became violent during a weekend rally by white nationalists in Virginia, reigniting a political firestorm over U.S. race relations and his own leadership of a national crisis.

Trump, who drew sharp criticism from Republicans and Democrats for his initial response, reverted on Tuesday to his position that both sides were at fault for the violence, a day after bowing to pressure to explicitly condemn the Ku Klux Klan, neo-Nazi and white supremacist groups.

Appearing angry and irritated, the president maintained that his original reaction was based on the facts he had at the time. Blame, he said, belonged on both sides.

From there, the back and forth with reporters turned tense.

The violence erupted on Saturday after white nationalists converged in Charlottesville for a "Unite the Right" rally in protest of plans to remove a statue of Robert E. Lee, commander of the pro-slavery Confederate army during the U.S. Civil War.

Many of the rally participants were seen carrying firearms, sticks and shields. Some also wore helmets. Counter-protesters likewise came equipped with sticks, helmets and shields.

The two sides clashed in scattered street brawls before a car plowed into the rally opponents, killing one woman and injuring 19 others. A 20-year-old Ohio man, James Fields, said to have harbored Nazi sympathies, was charged with murder.

Two state police officers also were killed that day in the fiery crash of the helicopter they were flying in as part of crowd-control operations.

Addressing the melee for the first time on Saturday, Trump denounced hatred and violence "on many sides." The comment drew sharp criticism across the political spectrum for not explicitly condemning the white nationalists whose presence in the southern college town was widely seen as having provoked the unrest.

Critics said Trump's remarks then belied his reluctance to alienate extreme right-wing groups, whose followers constitute a devoted segment of his political base despite his disavowal of them.

Yielding two days later to a mounting political furor over his initial response, Trump delivered a follow-up message expressly referring to the "KKK, neo-Nazis and white supremacists and other hate groups" as "repugnant to everything we hold dear as Americans."

Trump's detractors dismissed his revised statements as too little too late.

"Thank you President Trump for your honesty and courage to tell the truth about #Charlottesville and condemn the leftist terrorists in BLM/Antifa," Duke wrote, referring to Black Lives Matter (BLM) and anti-facists.

Democrats seized on Trump's latest words as evidence that Trump saw white nationalists and those protesting against them as morally equivalent.

"By saying he is not taking sides, Donald Trump clearly is," said Democratic Senate leader Chuck Schumer of New York. "When David Duke and white supremacists cheer your remarks, you're doing it very, very wrong."

In a similar vein, Virginia Governor Terry McAuliffe, a Democrat, said Trump's characterization of the violence missed the mark.

"Neo-Nazis, Klansmen and white supremacists came to Charlottesville heavily armed, spewing hatred and looking for a fight. One of them murdered a young woman in an act of domestic terrorism, and two of our finest officers were killed in a tragic accident while serving to protect this community. This was not 'both sides,'" he said.

A tweet by former President Barack Obama soon after the violence had garnered 2.8 million "likes" to become the most liked Twitter message ever by Tuesday, the social media network said.

"No one is born hating another person because of the color of his skin or his background or his religion...," Obama said in the tweet on Saturday, accompanying a picture of himself looking through an open window at a group of children.

Administration officials, hoping to put the controversy behind them after the remarks on Monday, worried that the controversy would now last for days and, potentially, affect the president's ability to achieve legislative and policy goals.

Asked about the White House's next steps, one official said: "I think next steps are just to stop talking."

"We cannot sit on a council for a president who tolerates bigotry and domestic terrorism," Trumka said. "President Trump's remarks today repudiate his forced remarks yesterday about the KKK and neo-Nazis."

In Tuesday's remarks, Trump also sympathized with protesters seeking to keep Lee's statue in place but offered no equivalent remarks for those who favored its removal.

"You had people in that group ... that were there to protest the taking down of a very, very important statue and the renaming of a park from Robert E. Lee to another name," he said.

Trump also grouped former presidents George Washington and Thomas Jefferson, two of the nation's founding fathers, together with Confederate leaders such as Lee, Jefferson Davis and Stonewall Jackson, who fought to separate Southern states from the Union, noting that all were slave owners.

On Tuesday, Trump explained his initial restrained response by saying: "The statement I made on Saturday, the first statement, was a fine statement, but you don't make statements that direct unless you know the facts. It takes a little while to get the facts."

In what became at times a heated exchange with reporters shouting questions, Trump said, "You also had people that were very fine people on both sides."