Elsa already caused at least three direct deaths and some damages to infrastructure and agriculture in Caribbean islands southeast of Cuba like St Lucia and the Dominican Republic. 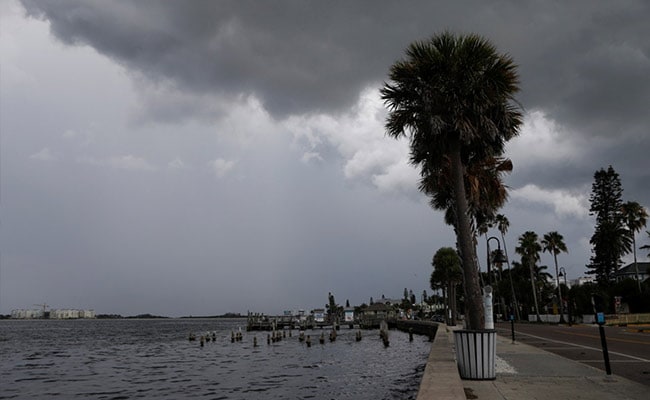 Dark clouds loom over the Pass-A-Grille channel ahead of Tropical Storm Elsa in St. Petersburg, Florida

The U.S. National Hurricane Center (NHC) said in its 11 p.m. (0300 GMT) update that Elsa was advancing at just 19 km per hour (12 mph) as it moved out to sea and sustained winds had picked up to peak near 95 kmph with higher gusts.

Storm surges were affecting Cuba's southern coast and would start occurring on the northern coast too, the Cuban meteorology institute said, causing light flooding in the capital in lower lying coastal areas such as along its famous Malecon seaside corniche.

"The rain is coming behind the center so the fact it is moving out to sea along the northern coast between Havana and Mayabeque ... does not mean the rain is over," Cuba's best known meteorologist Jose Rubiera said on state television.

More than 100,000 people in Cuba evacuated from flood-prone areas or unsafe housing in the potential path of the storm, most going to homes of family and friends, but thousands also to government shelters, state-run media reported.

While such preparedness has typically enabled Cuba to avoid the kind of casualties from storms seen elsewhere, it comes amid the country's worst coronavirus outbreak since the start of the pandemic, raising fears that evacuations could fuel infections.

Elsa already caused at least three direct deaths and some damages to infrastructure and agriculture in Caribbean islands southeast of Cuba like St Lucia and the Dominican Republic.

It comes as the tourism-reliant archipelago is already struggling with the economic fallout from the coronavirus pandemic and bracing for an above-active hurricane season.

Cuban meteorologists said the rains from Elsa could prove positive for agriculture, bolstering water reservoirs, as long as they were not too intense.

Rainfall of 5 to 10 inches (13 to 25 cm) with isolated maximum amounts of 15 inches (38 cm) was forecast across parts of Cuba on Monday night and expected to result in "significant flash flooding and mudslides," the Miami-based NHC said.

The approach of the storm forced Florida officials to demolish the remaining portion of a condominium building that collapsed 11 days ago, killing at least 24 people with over 120 still missing.

But revised predictions showing Elsa tracking to make landfall north of Miami-Dade sparked renewed optimism that the search for survivors would remain uninterrupted.

The NHC said amounts of 3 inches to 5 inches (8 to 13 cm)with localized maximum totals up to 8 inches (20 cm) were expected in the Keys and western portions of Florida through Wednesday, which may result in considerable flash and urban flooding, along with minor to isolated moderate river flooding.

A few tornadoes were possible across south Florida on Monday night and across the Florida peninsula on Tuesday, the agency added.

"All Floridians should prepare for the possibility of heavy rain, flooding and potential power outages," Florida Governor Ron DeSantis wrote on Twitter.

In Seminole, Florida, residents filled sand bags and placed them outside their homes to prevent flooding.

"If we have a lot of water .. and I wait till later to get sand bags there won't be any left, and then I will have a wet bedroom," said Wendy Schultz, adding she would stock them anyway for the rest of the season "'cause, you know, it's Florida."

Authorities and locals in some Caribbean island nations including Cuba had already started work by Monday on repairing damage caused by Elsa such as removing toppled trees and other debris and restoring power.