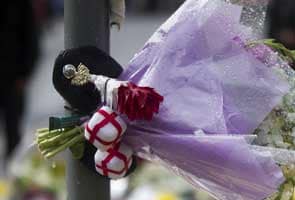 London: Three men were arrested on Saturday on suspicion of conspiracy to murder the British soldier hacked to death in a London street in an Islamist attack.

Two men aged 28 an 24 were arrested at a home in southeast London, with police firing a Taser electric stun gun on the older suspect, and on a 21-year-old man they arrested in a street around a mile (1.5 kilometres) from the murder scene.

Britain is dealing with the aftermath of a grisly murder which was the first fatal Islamist terror attack in the kingdom since the 2005 London bombings.

Meanwhile an inter-faith group reported a large spike in anti-Muslim incidents, while up to 2,000 members of the far-right English Defence League (EDL) staged a protest in the northeastern city of Newcastle.

Drummer Lee Rigby, 25, who survived a tour of duty in Afghanistan, was butchered in broad daylight Wednesday outside the Royal Artillery Barracks in Woolwich, southeast London.

Michael Adebolajo, 28, and 22-year-old Michael Adebowale remain in a stable condition after being shot by police at the scene of the killing.

They have both been arrested on suspicion of murder and are under armed guard in separate hospitals.

The three men arrested on Saturday on suspicion of conspiracy to murder were all held by detectives from the Counter Terrorism Command supported by specialist firearms officers.

The new counter-terror task force will include key cabinet ministers and bring in police and security chiefs when needed.

It will focus on radical preachers who target potential recruits in jails, schools, colleges and mosques. It was also to monitor trends in radicalisation and tackle "poisonous narratives".

Downing Street said the group would focus on practical measures rather than getting bogged down in theoretical debates about Britishness and cultural values.

Faith Matters, a state-funded organisation which works to reduce extremism, said it has recorded a huge increase in anti-Muslim incidents reported to its helpline since the attack.

"It's a hugely worrying development," director Fiyaz Mughal told AFP, saying the organisation had been informed of 162 incidents in the past 48 hours, compared to a daily average of four to six.

They were mainly verbal attacks on women wearing the Islamic headscarf in the street, he said, but there were also online attacks and some violence.

A woman in her 50s had been punched unconscious on the outskirts of Oldham, near Rigby's home city of Manchester in northwest England, while two mosques had been attacked in the south of the country.

Up to 2,000 members of the anti-Islam EDL gathered in Newcastle, police said, for a long-planned rally given added impetus by the soldier's murder.

They sang "RIP Lee Rigby" and chanted "Whose streets? Our streets", while some people waved British flags.

Up to 400 of their opponents staged a counter-protest, but the day passed off without major incident.

A small impromptu protest also took place in Manchester, while another demonstration is planned for outside Downing Street on Monday.

A number of people have been charged over malicious comments made on social networking sites.

Britain's intelligence agencies were facing scrutiny following claims that the MI5 domestic security service had tried to recruit one of the two murder suspects.

Both were known to the intelligence services and Adebolajo had links to the banned radical Al-Muhajiroun movement, but ministers and security experts have warned of the difficulty in keeping track of everybody with extreme views.

Both were brought up by Nigerian Christians and converted to Islam in their teens, and recently were seen handing out extremist literature in the streets -- to the concern of their families.

Adebowale's mother, Juliet Obasuyi, sought help from friends and an imam after growing increasingly concerned about her son, particularly when he dropped out of university nine months ago.

"He is from a strong Christian family but he is turning to Islam and turning against the family," she was quoted in newspapers as telling a Muslim neighbour.

"He needs spiritual guidance before he radicalises himself."

Promoted
Listen to the latest songs, only on JioSaavn.com
Meanwhile in Paris, a uniformed French soldier on anti-terror duties was stabbed in the neck in an attack that President Francois Hollande said could not "at this stage" be linked to the London murder.

The attacker fled the scene after stabbing the armed 23-year-old in La Defense business district, which at weekends is packed with shoppers.