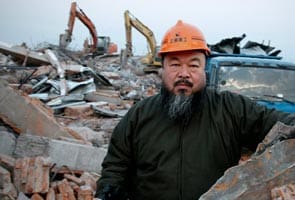 Beijing: The studio would have stood at the heart of an embryonic arts cluster on the outskirts of Shanghai, drawing luminaries from around the world.

It took two years to build, and one day to tear down.

The new Shanghai studio designed by Ai Weiwei, a protean artist who is one of the most outspoken critics of the Chinese Communist Party, was completely razed at the order of government officials on Tuesday, Mr. Ai said in a telephone interview from Shanghai on Wednesday. Mr. Ai said a neighboring studio he had designed for a friend had also been destroyed.

"Everything is gone," he said. "It's all black now. They finished the job at 9 o'clock last night."

It is the latest act in Mr. Ai's escalating conflict with government officials over the Communist Party's authoritarian rule -- a clash that Mr. Ai now views as performance art.

Mr. Ai said he did not know why officials decided to destroy the studios, but suspects it was because of his political activities. He had known about the order to destroy the studios since last July, when construction on the buildings was completed, but was shocked to discover that workers had started the job at 6 a.m. on Tuesday. Mr. Ai said officials had told him earlier that the destruction would not take place until after the first day of the upcoming Year of the Rabbit, which falls on Feb. 3.

"I called the officials and said, 'You promised us not to take it down until after New Year's Day,'" Mr. Ai said. "They said, 'If the studio is to be taken down, it doesn't matter if it's sooner or later.'"

Mr. Ai added that the officials might have moved ahead with their plans so that the destruction would take place without people knowing about it. Neighbors of the studio called Mr. Ai's assistant on Tuesday morning when they heard heavy machinery next door.

Mr. Ai said he rushed onto an airplane in Beijing, where he lives, and arrived in time to see four machines and dozens of workers toiling away on the site. About 80 percent of the structures had been destroyed by the afternoon, he said.

Shanghai city officials could not be reached on Wednesday evening for comment.

Mr. Ai's studio was to be used as an education center and a site for artists in residence. He had invited a group of university graduates from Oslo to come to the studio next month to study architecture with him.

Mr. Ai said he believes his advocacy in two causes might have angered Shanghai officials, thus sparking the initial move last year against the studios. The first cause was that of Yang Jia, a Beijing resident who murdered six policemen in a Shanghai police station after being arrested and beaten for riding an unlicensed bicycle. Mr. Yang became a hero among many Chinese, and was later executed. The second cause was the Kafkaesque case of Feng Zhenghu, a lawyer and activist who spent more than three months in Tokyo's Narita Airport after Shanghai officials denied him entry to the country. Mr. Ai had made a documentary about Mr. Feng's predicament.

Mr. Ai has also demanded democracy for China, criticized government corruption for playing a role in the deaths of schoolchildren in the 2008 Sichuan earthquake and stridently supported Liu Xiaobo, a political prisoner who was awarded the Nobel Peace Prize last year.

Shanghai officials had originally supported Mr. Ai in building a studio on the site, which is in a village known for its grape farms, Mr. Ai said. Mr. Ai spent $1 million to transform a dilapidated warehouse into a vast working space. Construction began in 2008 and ended in July 2010.

In November, Mr. Ai spread word that he was throwing a river crab feast at the studio in order to protest the orders to destroy it. The word for river crab, hexie, sounds nearly identical to the word for harmony, which the Communist Party claims to promote; the party's critics like to say censors are "harmonizing" the Internet and other forms of media.

Promoted
Listen to the latest songs, only on JioSaavn.com
Mr. Ai was put under house arrest in Beijing two days before the feast, but about 800 people showed up at the studio anyway. "You can't imagine that in Communist history, this would happen," he said.