Tip-offs, Cold Calls: How Germans Are Hustling For A Covid Shot

Germany has ramped up its COVID-19 vaccination campaign and has given a first vaccine dose to more than 38 per cent of the population, with 12 per cent fully vaccinated. 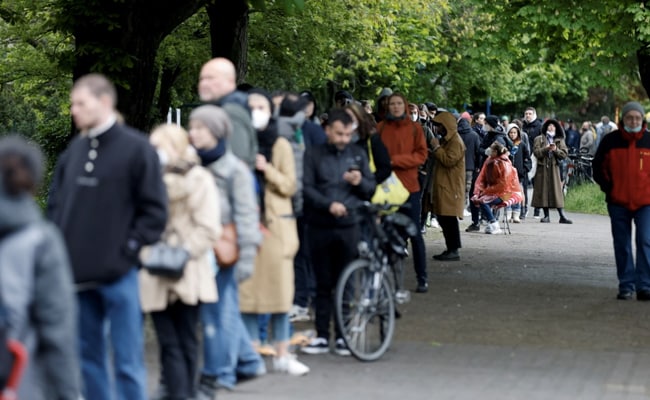 People queue up at a sports hall to get vaccinated against COVID-19 in Berlin, Germany.

Against its stereotype of order, Germany's vaccine rollout has descended into a frenzy as people turn to tip-offs, online message boards and cold calls to doctors in a scramble to get a COVID-19 shot.

Hampered by a shortage of supply, Germany started by vaccinating its oldest and most vulnerable citizens and has been gradually expanding shots to priority professions such as teachers and those working in critical infrastructure.

As stocks increased, it brought family doctors on board in April and some states lifted age limits for AstraZeneca's vaccine, prompting many younger people to call practices in the hope of getting doses.

But getting an appointment requires a bit of luck and the stamina to hustle.

One of those desperate for a vaccine was David Lynch, a 53-year-old yoga teacher in Berlin. His partner fired off more than 150 emails to doctors' surgeries, but only seven replied, offering to put him on an indefinite waiting list.

A tip-off on Twitter alerted them to a practice that was releasing appointments at 8 am on Saturday. Together with his partner and daughter they called over 1,700 times over four hours, to no avail.

Later that afternoon, his partner called another 100 times.

"From across the apartment I heard her scream, 'I've got an appointment'," Lynch told Reuters. "It seemed like it was unreal and surreal all at once."

This week, some German states dispensed with priority systems at surgeries altogether, a move criticised by doctors' associations which say it risks provoking chaos as ever more people compete for a still scarce commodity.

People are already showing up at doctors' practices and trying to get vaccines even when it is not their turn and the mood has become increasingly aggressive, doctors have said.

Earlier this month, thousands started forming queues overnight outside a mosque in Cologne and a trade fair in Freiburg where authorities were offering excess AstraZeneca doses without an appointment.

After a sluggish start, Germany has ramped up its vaccination campaign and has given a first dose to more than 38% of the population, with 12% fully vaccinated.

From June 7, Germany will lift restrictions for all people, Health Minister Jens Spahn said on Monday, but warned that not everyone will be able to get vaccinated immediately, pointing to ongoing logistical and supply bottlenecks.

Elsewhere, concerns are growing that the elderly and those lacking digital skills may face unequal access to vaccines.

In India, tech experts have written software code and designed websites to help people book COVID-19 vaccinations online. But critics say the workarounds give an unfair advantage to the tech-savvy.

The sudden scramble for a vaccine is in stark contrast to the hesitancy seen earlier in the year when reports of rare blood clots linked to the AstraZeneca shot and constant changes over who could get it led to appointments going unused.

Compounding the rush for a vaccine in Germany is a decision to ease COVID curbs for the fully vaccinated who no longer need a negative test to go shopping or visit a restaurant and are exempted from quarantine when returning from abroad.

"The holiday season ahead of us is putting a lot of pressure on us," said Doris Hoepner, a family doctor in Berlin, adding there were between 400-500 people on her waiting list. "The phones never stop ringing and we have two lines."

A decision by the government to shorten the required interval between AstraZeneca doses to four-to-eight weeks from 12 was also proving a headache for doctors, said Jan Thuemmler, who organises vaccinations at a Berlin practice

"We are getting a lot of calls from people who want to know if they can get their second dose sooner," he said. "That messes everything up."

With phone lines blocked, some are resorting to more unconventional methods.

One 45-year-old man offered a 100 euro ($122) fee in a classified advertisement on eBay to anyone who could help him and his wife get an appointment for Pfizer's COVID vaccine.

"We are both very flexible and can be anywhere in Berlin in a short period of time," he wrote.

Salman Rushdie's Writings Made Him Target Of Iranian Death Threats