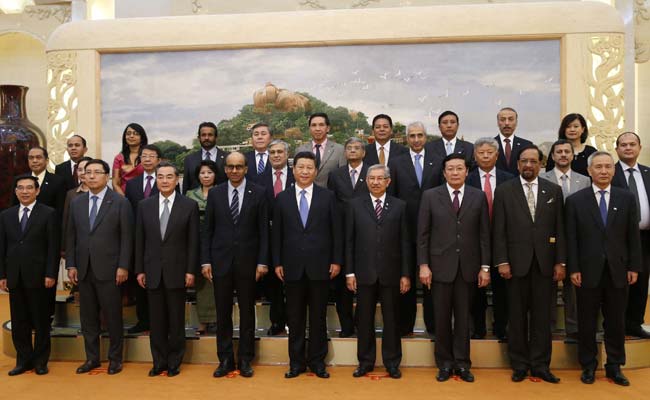 Shanghai: Australia, Indonesia and South Korea skipped the launch of a China-backed Asian infrastructure bank on Friday as the United States said it had concerns about the new rival to Western-dominated multilateral lenders.

China's proposed $50 billion Asian Infrastructure Investment Bank (AIIB) is seen as a challenge to the World Bank and Asian Development Bank, both multilateral lenders that count Washington and its allies as their biggest financial backers.

China, which is keen to extend its influence in the region, has limited voting power over these existing banks despite being the world's second-largest economy.

The AIIB, launched in Beijing at a ceremony attended by Chinese finance minister Lou Jiwei and delegates from 21 countries including India, Thailand and Malaysia, aims to give project loans to developing nations. China is set to be its largest shareholder with a stake of up to 50 percent.

Indonesia, where President Xi Jinping first spoke of the AIIB during an October visit last year, was not present and neither were South Korea and Australia, according to a pool report.

Media reports said US Secretary of State John Kerry put pressure on Australia to stay out of the bank.

However, State Department spokeswoman Jen Psaki said: "Secretary Kerry has made clear directly to the Chinese as well as to other partners that we welcome the idea of an infrastructure bank for Asia but we strongly urge that it meet international standards of governance and transparency.

"We have concerns about the ambiguous nature of the AIIB proposal as it currently stands, that we have also expressed publicly."

The Australian Financial Review said on Friday that Kerry had personally asked Australian Prime Minister Tony Abbott to keep Australia out of the AIIB.

"Australia has been under pressure from the US for some time to not become a founding member of the bank and it is understood Mr Kerry put the case directly to the prime minister when the pair met in Jakarta on Monday following the inauguration of Indonesian President Joko Widodo," the paper said.

South Korea, one of Washington's strongest diplomatic allies in Asia, has yet to say it will formally participate in the bank.

"We have continued to demand rationality in areas such as governance and safeguard issues, and there's no reason (for Korea) not to join it," South Korean Finance Minister Choi Kyung-hwan said in Beijing on Thursday.

Earlier this month, commenting on reports that was pressure from Washington to stay out of the AIIB, the South Korean finance ministry said: "South Korea has not delayed its participation but has been negotiating with China because it thinks more consideration is necessary on details of the planned bank such as the AIIB's governance and operational principles."

The Seoul-based JoongAng Daily quoted a South Korean diplomatic source as saying: "While Korea has been dropped from the list of founding members of the AIIB this time around, it is still in a deep dilemma on what sort of strategic choices it has to make as China challenges the U.S.-led international order."

On Thursday, the Asian Development Bank (ADB) chief said he doesn't welcome a China-backed rival bank that will have a virtually identical aim.

"I understand it, but I don't welcome it," said bank president Takehiko Nakao. "I'm not so concerned."

The ADB, created in 1966, offers grants and below-market interest rates on loans to lower to middle-income countries. At the end of 2013, its financing operations amounted to $21.02 billion.

China has a 6 percent stake in the ADB, and the major shareholdings are held by the United States and Japan.