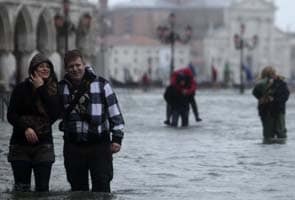 Florence, Italy: Three people died after their car fell off a collapsed bridge during heavy rain near the town of Grosseto in central Italy, authorities said on Tuesday, as severe flooding continued in the Tuscany region.

The identity of the victims was still being verified but the car they were in bore the logo of Enel, Italy's biggest electricity company, Civil Protection authority officials said.

It was not immediately clear if their vehicle drove off the bridge or was caught on it when it collapsed.

Tuscany and the neighbouring Umbria region have been devastated by severe flooding over the past two days as heavy rains caused rivers to break their banks in several areas.

One man died on Monday and more than 100 people were forced to flee their homes and take refuge in emergency shelters. Thousands were left without power as the towns of Albinia and Orbetello were cut off by rising waters.

The governor of Tuscany, Enrico Rossi, asked for help from the army to tackle the flooding.

Promoted
Listen to the latest songs, only on JioSaavn.com
Parts of northern Italy, including the historic city of Venice, have also been hit by heavy rain which has placed a severe strain on drainage systems and other infrastructure.