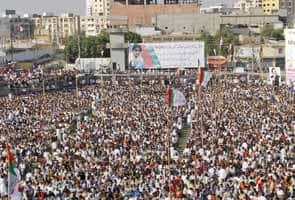 Karachi: Tens of thousands rallied in Pakistan's largest city on Sunday in the biggest show of support yet for a 14-year-old girl who was shot and seriously wounded by the Taliban for promoting girls' education and criticizing the militant group.

The Oct. 9 attack on Malala Yousufzai as she was returning home from school in Pakistan's northwest horrified people inside and outside the country. At the same time, it gave hope to some that the government would respond by intensifying its fight against the Taliban and their allies.

But protests against the shooting have been relatively small until now, usually attracting no more than a few hundred people. That response pales in comparison to the tens of thousands of people who held violent protests in Pakistan last month against a film produced in the United States that denigrated Islam's Prophet Muhammad.

Demonstrations in support of Malala and against rampant militant violence in the country in general have also been fairly small compared with those focused on issues such as U.S. drone attacks and the NATO supply route to Afghanistan that runs through Pakistan.

Right-wing Islamic parties and organizations in Pakistan that regularly pull thousands of supporters into the streets to protest against the U.S. have less of an incentive to speak out against the Taliban. The two share a desire to impose Islamic law in the country even if they may disagree over the Taliban's violent tactics.

Pakistan's mainstream political parties are also often more willing to harangue the U.S. than direct their people power against Islamist militants shedding blood across the country, partly out of fear and partly because they rely on Islamist parties for electoral support.

One of the exceptions is the political party that organized Sunday's rally in the southern port city of Karachi, the Muttahida Quami Movement. The party's chief, Altaf Hussain, criticized both Islamic and other mainstream political parties for failing to organize rallies to protest the attack on Malala.

He called the Taliban gunmen who shot the girl "beasts" and said it was an attack on "the ideology of Pakistan."

"Malala Yousufzai is a beacon of knowledge. She is the daughter of the nation," Mr Hussain told the audience by telephone from London, where he is in self-imposed exile because of legal cases pending against him in Pakistan. His party is strongest in Karachi.

Many of the demonstrators carried the young girl's picture and banners praising her bravery and expressing solidarity.

The leaders of Pakistan's main Islamic parties have criticized the shooting, but have also tried to redirect the conversation away from Taliban violence and toward civilian casualties from U.S. drone attacks.

Cyril Almeida, a columnist for Pakistan's Dawn newspaper, said this type of "obfuscation" prevents Pakistanis from seeing "there is a continuum from the religious right to violent Islamism."

Malala earned the enmity of the Pakistani Taliban for publicizing their behavior when they took over the northwestern Swat Valley, where she lived, and for speaking about the importance of education for girls.

The group first started to exert its influence in Swat in 2007 and quickly extended its reach to much of the valley by the next year.

They set about imposing their will on residents by forcing men to grow beards, preventing women from going to the market and blowing up many schools out of which the majority were for girls.

Malala wrote about these practices in a journal for the BBC under a pseudonym when she was just 11. After the Taliban were pushed out of the Swat Valley in 2009 by the Pakistani military, she became even more outspoken in advocating for girls' education. She appeared frequently in the media and was given one of the country's highest honors for civilians for her bravery.

The military carried out its offensive in Swat after a video surfaced of a militant flogging a woman who had allegedly committed adultery, which helped mobilize public support against the Taliban.

Many hope the shooting of Malala will help push the military to undertake a long-awaited offensive in the Pakistani Taliban's last main sanctuary in the country in the North Waziristan tribal area.

The young girl was shot in the neck, and the bullet headed toward her spine. Two of her classmates were also wounded in the attack.

Doctors at a military hospital operated on Malala to remove the bullet from her neck, and she was put on a ventilator. Her condition improved somewhat on Saturday when she was able to move her legs and hands after her sedatives were reduced.

On Sunday, she was successfully taken off the ventilator for a short period and later reconnected to avoid fatigue, the military said. Doctors are satisfied she is making slow and steady progress and will decide whether to send her abroad for treatment. They have not said whether she suffered any brain damage or other type of permanent damage.

The United Arab Emirates plans to send a specialized aircraft to serve as an ambulance for the girl in case doctors decide to send her abroad, the Pakistani ambassador to the country, Jamil Ahmed Khan, said on Sunday.

Visas are being finalized for the air ambulance crew and six doctors who will accompany the flight, Mr Khan told Pakistan's Geo TV.

Arrangements have been made to treat the girl at three hospitals in Dubai and Abu Dhabi, he said.

The UAE Embassy in Islamabad could not immediately be reached for comment.

Promoted
Listen to the latest songs, only on JioSaavn.com
No decision has yet been taken to send the girl abroad, but the air ambulance is part of the contingency plan, the Pakistani military said.

Afghan President Hamid Karzai has written letters to top political and religious leaders in Pakistan denouncing the attack on Ms Yousufzai and asking them to help battle extremism in both countries, the president's office said in a statement issued late on Saturday.Mr Karzai wrote that he views the shooting as an attack on Afghanistan's girls as well.