The "Strike for Black Lives" saw employees from a broad range of industries briefly walk off their jobs in a call to end "systemic racism." 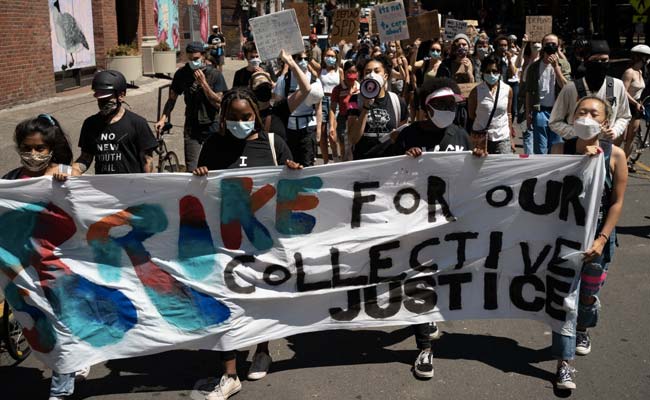 Demonstrators carry a banner as part of the nationwide Strike For Black Lives in Washington.

Thousands of US workers walked out of their jobs across the country Monday for a strike in solidarity with the Black Lives Matter movement and other minority groups which suffer racism.

The "Strike for Black Lives" saw employees from a broad range of industries briefly walk off their jobs in a call to end "systemic racism."

US media reported that tens of thousands of people in more than 200 cities across the country participated in the strike.

Although organizers did not have exact figures on how many people took part, they said around 1,500 janitors demonstrated in San Francisco, and nearly 6,000 nurses from 85 different nursing homes in New York, New Jersey and Connecticut also went on strike, according to The Washington Post.

In New York, some 100 people marched outside the Trump International Hotel to demand the adoption of the HEROES Act, legislation that would provide financial aid to households struggling during the coronavirus pandemic.

The bill was passed in May by the Democrat-majority House of Representatives but has since been blocked by the Senate, which is controlled by Republicans.

Among the New Yorkers who demonstrated in sweltering heat were nurses, doormen and cleaners -- workers who were considered essential during the pandemic and turned up for their jobs even when it put them at risk of infection.

"We are the ones who have kept the economy going and have kept everybody safe and in NY specially have kept the numbers down. We should be respected and compensated for that," said 42-year-old doorman Jordan Weiss.