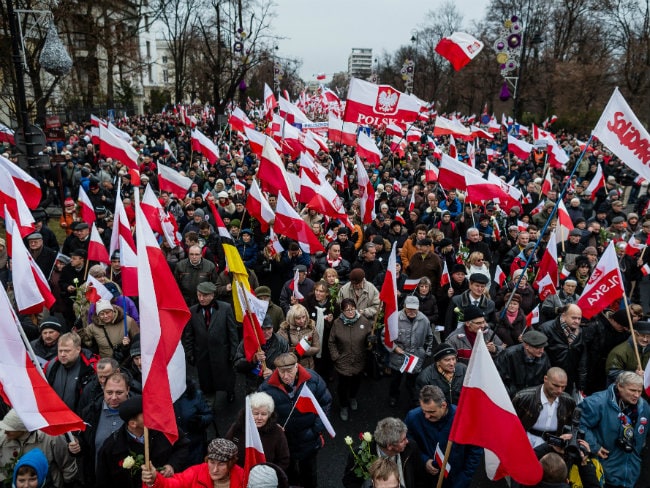 The big demonstration took the protesters, waving Poland's red-and-white flag, past the government seat and ended at the monument to independence father Jozef Pilsudski.

"It's a march of citizens defending democracy, press freedom and civic rights," Jaroslaw Kaczynski, head of the conservative opposition Law and Justice (PiS) party, said at the start of the protest.

Organisers of the rally put the crowd's number at 60,000. Police declined to give an estimate.

Major computer breakdowns in polling last month disrupted the first round of the local elections, prompting the opposition to cry foul and to note wide differences between voter surveys and the announced results.

"These elections were rigged," Kaczynski told supporters. "They want to deprive us of our ballots because they are seeing the prospect of our victory."

The ruling Civic Platform swept most of Poland's big cities including Warsaw, Gdansk, Wroclaw and Poznan, while the PiS held onto power in smaller cities, mainly in the east and southeast.

Coming six months before a presidential election and a year before parliamentary polls, the local vote was seen as an important test for the ruling party.

Promoted
Listen to the latest songs, only on JioSaavn.com
Since Saturday's protest coincided with the 33rd anniversary of a crackdown by communist leader Wojciech Jaruzelski on the Solidarity trades union, the demonstrators read out the names of dozens of people killed during the period of martial law that began with the December 1981 crackdown and ended in July 1983.