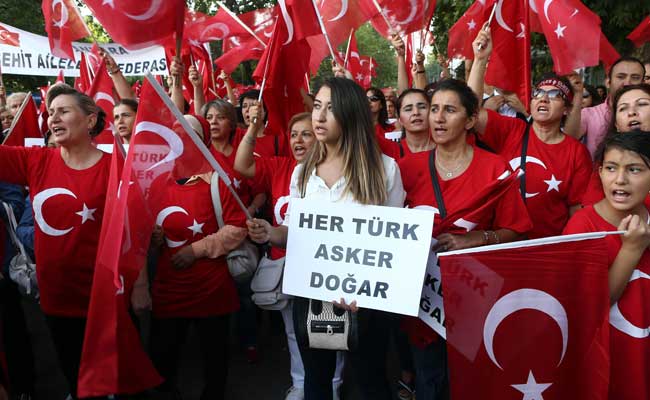 People hold Turkish flags during a rally on September 12, 2015 in Ankara to protest against terrorist attacks. (AFP)

Ankara: Thousands of people waving national flags took part in an anti-terrorism rally in Turkey's capital Ankara on Thursday, as the army presses a major offensive against Kurdish militants, who have killed dozens of security force members in weeks of attacks.

The rally was organised by a coalition of NGOs, trade unions and business groups, who warned that demonstrators displaying or voicing political emblems or slogans would be excluded.

It comes three days before a more politically charged anti-terrorism rally in Istanbul, to be addressed by President Recep Tayyip Erdogan.

Erdogan's two-month-old offensive against the militant Kurdistan Workers' Party (PKK), with whom he had been in peace talks for three years, has divided Turkey.

His critics accuse him of using a suicide bombing in a town on the Syrian border in late July that was blamed on Islamic State jihadists to reignite a three-decade conflict with the PKK, ending a two-year ceasefire.

The PKK has hit back hard, killing scores of soldiers and police in a string of attacks in the mainly Kurdish southeast, triggering reprisal attacks by nationalist mobs on Kurdish parties and businesses in other regions.

The organisers of Thursday's rally, who included the Tusiad business federation, TESK trade union and the Turkish Bar Association, called for national unity.

"This rally is seeking to demonstrate unity and brotherhood of 78 million people under the Turkish flag," TESK chairman Bendevi Palandoken told AFP.

A giant red Turkish flag held aloft by the demonstrators carpeted the crowd, covering a distance of over a kilometre.

Among the demonstrators at Ankara's Sihhiye square was 81-year-old Fatma Kurthasan, whose son, an army colonel, is stationed in the mainly Kurdish city of Diyarbakir.

"I am worried about the escalation of terrorist attacks on soldiers and police," she said. "I am here for peace."

Metin Feyzioglu, head of the Bar Association, said that while the PKK was "a terrorist organisation... the fight against terror must remain on legitimate ground within the rule of law."

"Turkey's strongest instruments in the fight against terrorism is not its warplanes or tanks but its legitimacy as a state governed by the rule of law," Feyzioglu said.

At least 120 police and soldiers have been killed in attacks claimed by or blamed on the PKK since July, according to state-run media.

The army, for its part, claims to have killed more than a thousand rebels in strikes against the PKK's bases in northern Iraq and southeast Turkey -- figures that have been treated with scepticism in independent media.

Some 40,000 people have died since the PKK took up arms in 1984 seeking an independent state for Turkey's Kurdish minority. The rebels have since refocused their demands on winning greater autonomy and cultural rights.

The resurgence in violence comes ahead of parliamentary elections on November 1, in which Erdogan's ruling Justice and Development Party (AKP) is seeking an outright majority after falling short of the mark in June polls.
Comments
Kurdish militantsTurkey marchAnkara protestsanit-terrorism rallyTurkish army