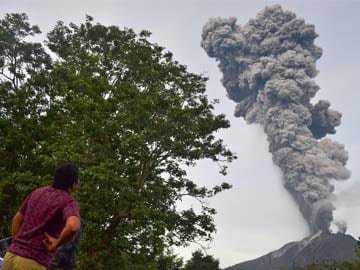 A man watches as Mount Sinabung continues to erupt, with hot smoke spewing from the volcano. (AFP)

Jakarta: A volcano in western Indonesia has erupted eight times in just a few hours, "raining down rocks" over a large area and forcing thousands to flee their homes, officials said on Sunday.

Mount Sinabung has been erupting on and off since September, but went into overdrive late Saturday and early Sunday, repeatedly spewing out red-hot ash and rocks up to eight kilometres (five miles) into the air.

Several thousand people left their homes overnight, taking the total number of those who have fled since the volcano rumbled to life to around 12,300, said the national disaster agency.

"People panicked last night as the eruption was accompanied by a loud thunderous sound and vibrations. Then it started raining down rocks," said local government official Robert Peranginangin.

"They ran helter-skelter out of their homes and cried for help."

He added there were no known casualties from the latest eruptions.

The volcanology agency raised the alert level for the volcano, on the northern tip of Sumatra island, to the highest point on a four-stage scale, meaning a hazardous eruption is imminent or under way.

National disaster agency spokesman Sutopo Purwo Nugroho said the government was calling for people living within five kilometres (3.1 miles) of the volcano to leave their homes.

Sinabung, one of dozens of active volcanoes in Indonesia which straddles major tectonic fault lines known as the "Ring of Fire", erupted in September for the first time since 2010.

In August five people were killed and hundreds evacuated when a volcano on a tiny island in East Nusa Tenggara province erupted.

Promoted
Listen to the latest songs, only on JioSaavn.com
The country's most active volcano, Mount Merapi in central Java, killed more than 350 people in a series of violent eruptions in 2010.