"Oh God This Is A Baby, It's Alive": Fisherman Finds Infant Floating

It turned out the "doll" was 18-month-old Malachi Reeve, who had opened the zip of his sleeping parents' tent, then made his way out of a beachside campsite and into the water, where a current caught him. 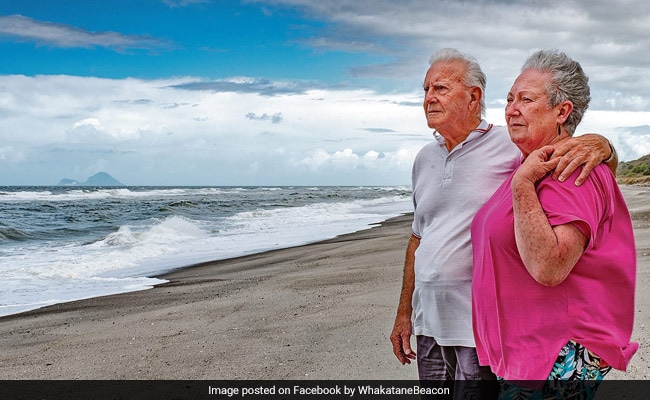 Gus Hutt was preparing for an early morning fish when he saw what appeared to be a doll bobbing past him.

A New Zealand baby was plucked from the ocean as he floated past a fisherman in a rescue hailed as "miraculous" by water safety experts, who warned the accident could easily have ended in tragedy.

Gus Hutt was preparing for an early morning fish when he saw what appeared to be a doll bobbing past him in a rip current at Matata Beach in the North Island's Bay of Plenty.

"I thought he was just a doll," Hutt told the Whakatane Beacon of the incident on October 26. "So I reached out and grabbed him by the arm, even then I still thought it was just a doll.

"His face looked just like porcelain, with his short hair wetted down, but then he let out a little squeak and I thought 'oh God this is a baby and it's alive'."

It turned out the "doll" was 18-month-old Malachi Reeve, who had opened the zip of his sleeping parents' tent, then made his way out of a beachside campsite and into the water, where a current caught him.

Hutt, a local, said he had altered his usual routine slightly and was about to cast off about 100 metres (110 yards) from his normal spot on the shoreline when the object floated by.

"He was floating at a steady pace with a rip in the water. If I hadn't been there, or if I had just been a minute later I wouldn't have seen him," Hutt said.

"He was bloody lucky, but he just wasn't meant to go. It wasn't his time."

Malachi's parents were alerted and rushed to the camp reception, where mother Jessica Whyte found her boy "purple, cold and looking smaller than usual".

But after treatment from paramedics he was given the all clear and Whyte said he was unaffected by his ordeal.

"He's himself. Maybe he'll be more aware of water, not run into beaches. But he's definitely himself," she told the Stuff news website.

She said the toddler had been fascinated by the sea the previous day and must have woken up early to explore.

"This is a pretty miraculous survival story," he told AFP.

"It really is just a matter of luck that the fisherman was in the right place at the right time and was able to pull the child out of the water."

He said seven pre-schoolers drowned last year in New Zealand and there had been three fatalities involving children under five so far in 2018.

"It takes less than a minute for a child to drown," he said.

"The only way to keep babies and toddlers safe around water is constant active adult supervision at all times."

(Except for the headline, this story has not been edited by NDTV staff and is published from a syndicated feed.)
Comments
Baby rescued from seaNew ZealandMiracle stories