This Weird Moon Of Saturn Has Some Essential Ingredients For Life

Saturn's largest moon is rich with carbon, nitrogen and hydrogen - elements required by all living organisms on Earth. 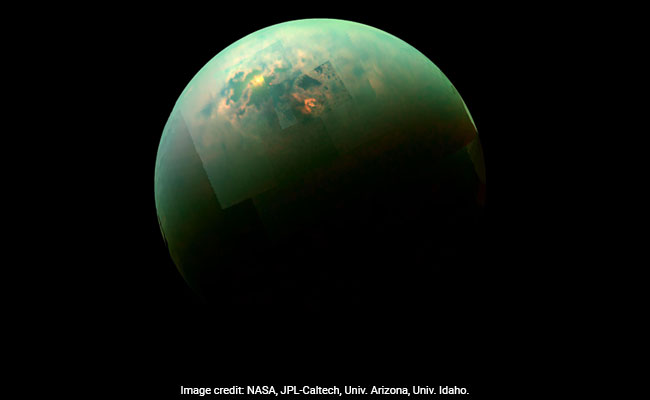 If you were going to cook up life on another world, Titan is the place to do it.

Saturn's largest moon is rich with carbon, nitrogen and hydrogen - elements required by all living organisms on Earth. It has two types of wet ingredients - an ocean of water underground and lakes of liquid methane on the surface. And it's flush with energy - just one of those methane lakes could power every U.S. home for 300 years.

Researchers have now detected two more potentially important ingredients for making aliens: a compound that can form a membrane like the kind that envelops cells, and long chains of carbon atoms that may be "universal drivers" for the chemistry that precedes life.

It's as though scientists have walked into a cosmic kitchen and found the oven has been preheated to 350 degrees and the flour and eggs are mixed together, said Sarah Horst, a professor of planetary science at Johns Hopkins University. "But you weren't there when they got mixed, so you don't know what they got mixed up to do. You don't know what will happen when you bake it," she said.


All those ingredients may add up to nothing. Or, "You might be like, ... this is an amazing souffle." Horst laughed.

Making an organism is a lot harder than baking a souffle. And if biology is brewing on Titan, it will likely be very different from life as we know it. At nearly 1 billion miles from the Sun, Titan is bitterly cold - temperatures average minus 290 degrees Fahrenheit on a mild day. The hazy atmosphere is full of smog-like clouds that rain down liquid methane, and the lakes contain highly flammable hydrocarbons (the main component of gasoline) that would quickly catch fire if oxygen were present. Luckily (or not, depending on how much you enjoy breathing), Titan has hardly any oxygen to speak of.

But Horst, who was not involved in the recent research, says Titan is an ideal target in our solar system to search for life as we don't know it. The two latest discoveries just add to the mounting evidence.

The first, published in the Astrophysical Journal Letters late last month, comes from the NASA spacecraft Cassini, which detected in Titan's atmosphere a peculiar kind of molecule previously only seen in meteorites, comets and the dusty space between stars. This molecule, called a carbon chain anion, appears to be a catalyst for complicated chemical reactions, said lead author Ravi Desai. Much the way lemon juice reacts with baking soda to make a cake rise, this anion, or negatively charged molecule, may trigger reactions that produce bigger organic molecules.

The discovery of carbon chain anions high in Titan's atmosphere is as exciting to astrobiologists as any tasty dessert would be. These molecules are associated with the creation of organic compounds in interstellar dust clouds and with the amino acids and other biological building blocks that have been detected on meteorites and comets.

The fact that similar chemistry occurs in Titan's clouds suggests that the creation of life's building blocks could be a "universal process," Desai said, "with universal drivers behind it."

Desai, a physicist at University College London, emphasized that you'd need several steps to get from carbon chain anions to actual living beings. In an absolute best-case scenario, these molecules would trigger the reaction of bigger organic compounds, which are then combined into amino acids, which build proteins, which are an essential ingredient for cells. Scientists don't yet have proof that all those steps are happening on Saturn's moon.

But they do know that Titan's atmosphere contains a wealth of large organic compounds - rings and chains of hydrogen, carbon and nitrogen, some of them hundreds of atoms long, that emerge as you drift down toward the surface. And Horst has performed experiments in her lab here on Earth showing that amino acids and nucleotides (the basic units of DNA) can be concocted from the chemical broth of the moon's haze.

"It all sort of comes together," Desai said.

Add to that list of intriguing ingredients another newly detected organic molecule, vinyl cyanide. Despite the unpromising name - which sounds like the alias of a super villain who kills with toxic 1970s couches - this molecule has astrobiologists really excited, according to Horst. Research published in 2015 showed that vinyl cyanide molecules can clump to form a spherical envelope much like the membranes that surround our cells.

"And we know that life is a whole bunch of containers, basically, that keep things where we want them until we want them somewhere else," Horst said. "Molecules like vinyl cyanide might be able to do that kind of thing."

Vinyl cyanide is exciting because it's amphiphilic: One end has an electric charge, the other doesn't. This is the same attribute that lets soap molecules cluster around oil and dirt when you clean your dishes. It's also what makes the lipids that form our cell membranes spontaneously assemble into a skin that can enclose a cell.

Our cell membrane lipids require oxygen, and they only work when immersed in water - both of which are hard to come by on Titan's surface. But vinyl cyanide comprises just carbon, hydrogen and nitrogen, and it makes a membrane when submerged in liquid methane, which Titan is swimming in. Could this be a key to basic biochemistry on Titan?

Using data from the Atacama Large Millimeter Array, 66 telescopes spread across a desert plateau in Chile, NASA Goddard planetary scientist Maureen Palmer was able to detect the electromagnetic signature of vinyl cyanide - a tiny, seven-atom molecule in an atmosphere 900 million miles away.

"It would be a lot different from the chemistry we're used to on Earth," Palmer said. "That's why when we're thinking about astrobiology on Titan it's sometimes called 'weird life.' . . . It's a fascinating target for trying to explore the boundaries for what life would be possible."

Much of what we know about Titan's potential habitability comes from Cassini, the NASA probe that's been circling Saturn for more than a decade. The spacecraft dropped a lander onto Titan (humanity's first-ever landing on a moon beside our own), discovered the moon's lakes, and detected scores of important organic molecules on this weird body.

Yet Cassini is nearly out of fuel. Rather than leaving it aloft - and risk it crashing into Titan and contaminating the alien moon - scientists programmed the probe to take a fatal plunge into Saturn's roiling interior in mid-September.

Palmer's discovery, which was published in the journal Science Advances, is heartening to scientists who were dreading the end of the Cassini mission, because it suggests that molecules in an alien atmosphere can be pinpointed with stunning precision by telescopes here on Earth.

But Horst is still gunning for a return mission to the giant moon.

"People ask me all the time if I think there's life on Titan, and you will get a different answer from me . . . depending on how much alcohol I've had," she said. "But we are pretty darn sure that everything in these broad, big-picture categories that's required for life exists on Titan. At some point it just comes down to, well, shouldn't we go check?"

(This story has not been edited by NDTV staff and is auto-generated from a syndicated feed.)
Comments
Moon Of SaturnSaturnTitan