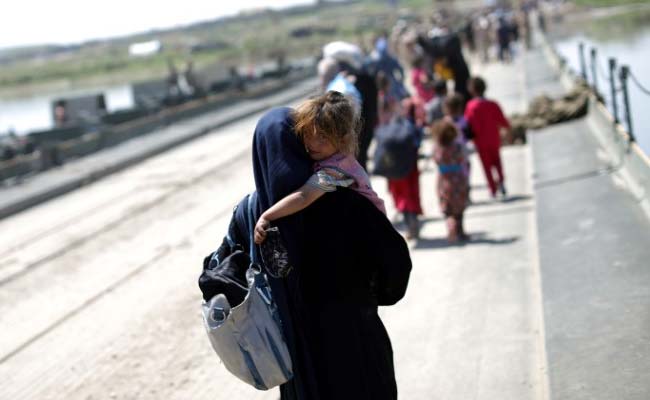 Long queues formed at the new bridge on Tuesday with families crossing in public buses. (Reuters)

MOSUL: Iraqi's army has built a new pontoon bridge over the Tigris river south of Mosul, after flooding had blocked all crossing points, opening an escape route for families fleeing fighting between government forces and ISIS.

The city's permanent bridges have been largely destroyed during a six-month military campaign to seize back Mosul, which overran it in 2014.

Long queues formed at the new bridge on Tuesday with families crossing in public buses, trucks and taxis.

Deliveries from Erbil, located some 80 km (50 miles) east in peaceful Iraqi Kurdistan, where aid agencies are based, had stopped due to the flooding.

"Everything is back to normal," said a spokeswoman for the UN refugee agency UNHCR.

Some 20,000 people have escaped from Mosul in the past four days, fewer than before due to the lack of transport, the UNHCR said in a report. Almost 330,000 people have fled Mosul since Iraq started an operation to expel ISIS in October.

They were some of the around 400,000 people still in western Mosul where military forces are trying to dislodge the terrorists from the Old City.

Fighting continued in the Old City where heavy smoke could be seen from the area of the Grand al-Nuri Mosque, from where ISIS leader Abu Bakr al-Baghdadi declared a "caliphate" spanning parts of Iraq and Syria.

Aircraft, helicopter and artillery opened fire, while gunfire could also be heard at several positions of Iraq's federal police near the Old City.

"They (ISIS) carry out attacks on our defensive lines, but each time we repel them and they run away, leaving bodies of their dead fighters behind," Lieutenant Colonel Hussein Lazim Zghayer said of the force's 9th division.

"Minutes ago, they launched an attack and we responded by shelling them with mortar rounds, killing two of them and their bodies were left in front of our defensive lines," he said.

Government forces, including army, police and elite counter terrorism units have taken back most of Mosul, including the half that lies east of the Tigris river.

Promoted
Listen to the latest songs, only on JioSaavn.com
The terrorists are now surrounded in northwestern Mosul, using booby traps, sniper and mortar fire against the assailants.