This Fashion Billionaire Plans To Hand Out Cash From Space

Japanese billionaire Yusaku Maezawa blasted off from the Baikonur Cosmodrome in Kazakhstan Wednesday on a Soyuz spacecraft taking him to the International Space Station for a 12-day trip. 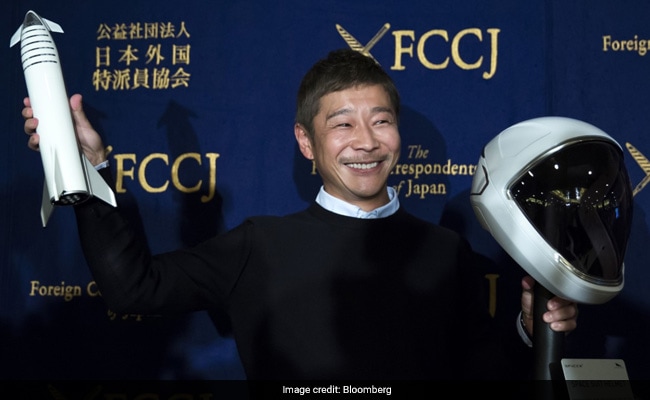 Japanese billionaire Yusaku Maezawa, who regularly gives out money on Twitter to attract followers, is planning to do the same from space.

The 46-year-old fashion magnate blasted off from the Baikonur Cosmodrome in Kazakhstan Wednesday on a Soyuz spacecraft taking him to the International Space Station for a 12-day trip. "I feel like a kid waiting for a school trip," Maezawa said at an earlier news conference.

The founder of online clothing retailer Zozo Inc is Japan's first space tourist. The trip is a prelude to a planned SpaceX trip to the moon, announced in 2018 by Maezawa and Space Exploration Technologies Corp. founder Elon Musk. As entrepreneurs open up a new era in space, Miami tech tycoon Lane Bess is also among those blasting off this week on a rocket from Jeff Bezos's Blue Origin.

Maezawa, also the first space tourist to travel to the ISS in more than a decade, has spent months tweeting about his planned sojourns beyond earth's atmosphere, using the social-media platform to recruit fellow space tourists and even find a life partner to travel with him on the lunar trip scheduled for 2023. The billionaire, who has a tendency to overshare his life in tweets, will be detailing the results of experiments requested by his fans on his YouTube channel of more than 770,000 subscribers.

Good morning. It's launch time in 9 hours. I'm going to wash my body thoroughly, disinfect my skin, wear my space underwear and flightsuit, transport closer to the launch site, wear my spacesuit, head to the launchpad, and board my Soyuz. pic.twitter.com/N06L4iPYzt

The mogul, who skipped college and joined a rock band before amassing his wealth, has also been posting footage of his training sessions at a space center outside Moscow. The trip on the Russian Soyuz MS-20 is estimated to cost more than $88 million for Maezawa and his assistant Yozo Hirano, according to estimates in local media. Also aboard will be Roscosmos cosmonaut Alexander Misurkin.

"My dream is finally coming true," said Maezawa, who returns to earth Dec. 20. Winners of the billionaire's online cash handouts - which can be as much as 1 million yen ($8,800) - usually receive them via bank transfers; this time, instead of a lottery, Maezawa has promised that everyone who participates in the handout will win and receive some amount.

The space launch is part of broader effort to open up the ISS to business opportunities as NASA seeks to replace the space station with a commercial orbiter by 2030. In September, a SpaceX rocket sent four civilians into orbit, bolstering Musk's aspirations to make human spaceflight more accessible.

With a net worth of $3.4 billion, according to the Bloomberg Billionaires Index, Maezawa is one of Japan's most flamboyant entrepreneurs, making headlines dating celebrities and going on shopping splurges. He began to attract attention in 2016 when he bought a Jean-Michel Basquiat painting for $57.3 million, and another for $110.5 million the following year.

Zozo once became a top retailer in Japan by lining up brands on its website and selling body-tight suits to take measurements for custom-fitted clothes. But the torrid pace of growth didn't last. Maezawa resigned from management in 2019 after selling a stake in the company.