They Just Got Married. Then Family Watched In Horror As They Hit The Road

Harley and Rhiannon Morgan hit a trailer-towing pickup truck as they turned onto the highway from a driveway at the Orange, Texas, courtroom where they tied the knot 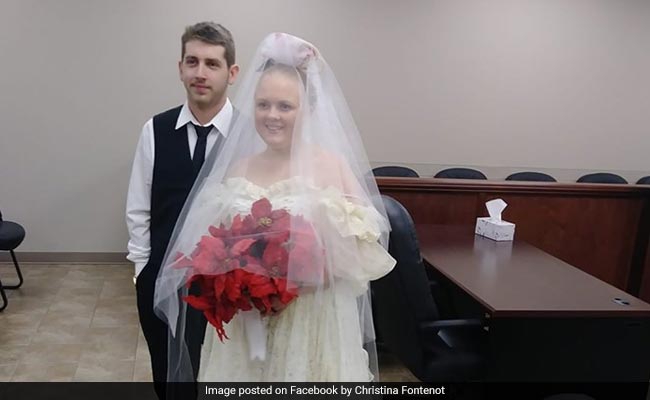 Police, who did not respond to an inquiry, are investigating the collision

Family watched Friday as high school sweethearts got married - then, minutes later, as they died.

Harley and Rhiannon Morgan hit a trailer-towing pickup truck as they turned onto the highway from a driveway at the Orange, Texas, courtroom where they tied the knot, city police told local news station KFDM. The groom's mother and sister looked on in horror from behind.

What they saw was haunting, Harley's mother, Lashawna Morgan, told the news outlet. The Chevy Cavalier flipped before crashing into a ditch off Texas 87, according to the Beaumont Enterprise.

"I had to sit there and watch my two babies die," Morgan said. "That is an image I will have for the rest of my life. I still have his blood on my hands from trying to pull him and her out of there."

Harley was just 19 years old; Rhiannon was 20. The couple from Vidor, Texas, died on the scene near the chambers of Justice of the Peace Joy Dubose-Simonton, who had the grim duty of declaring dead the couple she'd just married, the Beaumont Enterprise reported.

Harley and Rhiannon got in the car to file their marriage license at the county courthouse, change Rhiannon's legal name and snap more pictures, the paper reported. Five loved ones were along for the festivities. There were plans for cake and a bigger ceremony later this year, family said.

After the crash, about a dozen people came together in Vidor at the Dunkin' and Baskin Robbins where Harley was a baker. They remembered the couple with the cake they never got to eat.

Police, who did not respond to an inquiry, are investigating the collision. They said the man driving the truck was uninjured, KFDM reported.

The Morgans' family, meanwhile, is devastated.

"Please go home and hug your loved ones tonight," Lashawna Morgan said, standing by the highway as officials carried over remnants of the upended lives: a bloody bouquet, the envelope with the marriage license. "Do not go to bed angry."

(Except for the headline, this story has not been edited by NDTV staff and is published from a syndicated feed.)
Comments
Harley and Rhiannon Morgancouple dies after marriage