In a busy shipping lane, a collision that shouldn't have happened nearly sank a sophisticated warship. 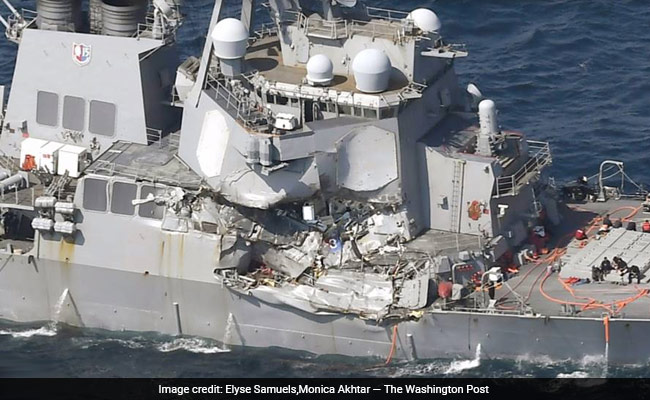 Yokosuka, Japan: In the dark of night the weather was clear, with a swell of about six feet.

Near where the sea lanes converge for the run into Tokyo Bay, the USS Fitzgerald was on a routine mission - though in these waters, mariners say, routine means always taking extra caution.

One of the Navy's most advanced ships, the Aegis guided-missile destroyer was equipped with the latest and most sophisticated radar equipment. Onboard the 8,315-ton vessel was a crew of 300. On the bridge, a full complement of officers and enlisted personnel was on duty. The commanding officer, Cmdr. Bryce Benson, was in his cabin, on the starboard side. It was about 2 a.m.

Just offshore from Shimoda, a popular beach resort town on a peninsula at the western entrance to the Sagami Sea, a container ship, the Philippine-flagged ACX Crystal, was sailing east from the port of Nagoya toward Tokyo. Four hundred ships a day sail through this gulf toward Japan's biggest port, and the traffic, the scattering of islands, and the lights on land can make navigation extremely difficult. This is a place where vessels - night and day - must take special care to follow the established rules of the road and steer clear of one another.

Early Saturday morning, the Crystal - for reasons that have not been explained - swung around 180 degrees in that busy waterway and doubled back on its course, heading nearly due west.

Minutes later, just before 2:20 a.m., the much larger container ship hit the U.S. warship broadside, just about amidships on the starboard rail. The freighter punched a wide hole into the Fitzgerald, breaching two compartments below the waterline where there were berths for 116 sailors, as well as a machinery room.

A "tremendous" amount of water flooded through the huge gash, in the words of Vice Adm. Joseph Aucoin, commander of the U.S. 7th Fleet. Sailors asleep in their berths woke to a powerful torrent of seawater. Seven sailors never made it out.

"There wasn't a lot of time in those spaces that were open to the sea, and as you can see now, the ship is still listing," Aucoin said Sunday at the U.S. naval base at Yokosuka, 50 miles northeast of the collision site. Gesturing to the destroyer, docked behind him with pumps continuing to bring water up out of the hull, he added: "They had to fight this ship to keep it above the surface. It was traumatic."

The collision crumpled parts of the ship above deck, too. Benson received a severe head wound and his cabin was destroyed. "He's lucky to be alive," Aucoin said.

The damage could have sunk the Fitzgerald, he said, but for the quick action of the crew.


Aucoin said the bodies of all seven sailors who died were recovered in the berthing compartment after the wounded ship had been taken into port.

When two vessels converge, the one having the other to starboard - to the right - is required to yield. That suggests that the Crystal had the right of way over the Fitzgerald, which was struck on the starboard side, but the details of their collision have not been fully investigated.

The container ship is nearly four times the size of the destroyer, and considerably more cumbersome. The warship is designed to be fast and agile.

"We just don't expect a very capable warship to be so badly damaged in a normal, peacetime environment," said Patrick Cronin, head of the Asia-Pacific program at the Center for a New American Security.

But mariners don't expect heavy freighters to turn around in the middle of a busy seaway, either.

In some ways, Cronin said, it didn't matter who had the right of way in this case. "In my mind, our destroyer is a more capable, agile ship, so regardless of who has right of way, our ship should be able to take evasive action," he said.

Because of the hour when the collision happened, many sailors were sleeping, but a normal bridge crew was on duty, Aucoin said.

There was no indication of any problem with the navigational equipment, he said.

Photos from the scene showed scrapes on the port side of the Crystal's bow. The ship is operated by Nippon Yusen K.K., a Japanese shipping company, and all 20 of its crew members were reported unharmed.

American and Japanese investigations are underway to determine how a technologically advanced U.S. warship was not able to avoid the container ship. Aucoin said he would not speculate on how long they would take to get to the bottom of what happened.

"This was a severe emergency," Aucoin said. "The damage was significant. This was not a small collision."

The destroyer, nicknamed "the Fighting Fitz" within the Navy, is salvageable, but repairs probably will take months, Aucoin said.

A retired naval officer who spoke on the condition of anonymity said he understood the collision had damaged some of the Fitzgerald's advanced combat systems and radio equipment.

Benson was the first to be evacuated from the damaged vessel and is being treated at the U.S. naval hospital at Yokosuka. He was awake but not able to answer questions.

Service members and their relatives took to the 7th Fleet's Facebook page to bid the victims "fair winds and following seas, shipmates" - a traditional mariner's farewell.

Collisions at sea have become rare in recent decades as navigational technology has improved.

The current case recalled the collision of the submarine USS Greeneville and a training ship belonging to a Japanese fishery high school off the coast of Hawaii in 2001. The Greeneville suddenly surfaced underneath the Japanese ship, causing it to sink and claiming nine lives, four of them high school students.

"Things like this happen because of human error, sometimes complicated by some technical difficulty," Cronin said, calling it "heroic" that the Fitzgerald's crew was able to get back to port.

"U.S.-Japan cooperation has been fantastic," he said.

Japanese coast guard and military ships assisted with the rescue, and Japanese planes and helicopters searched the waters before the bodies were found.

The Fitzgerald is part of the Yokosuka-based naval group that includes the aircraft carrier USS Ronald Reagan, but it was operating independently of the carrier when the collision occurred.

Seven U.S. sailors went missing after a U.S. Navy destroyer collided with a Philippine-flagged merchant ship off the coast of Japan on June 17. A number of the missing sailors were found dead in the destroyer's flooded berthing compartments. (Elyse Samuels, Monica Akhtar/The Washington Post)

Promoted
Listen to the latest songs, only on JioSaavn.com
- http://wapo.st/2rIb9av