"We Will Be In Moscow": Trump's 30-Year Quest To Do Business In Russia

On Thursday, his former attorney Michael Cohen told a federal judge that Donald Trump was pursuing a deal to build a Trump Tower in Moscow throughout the first half of 2016. 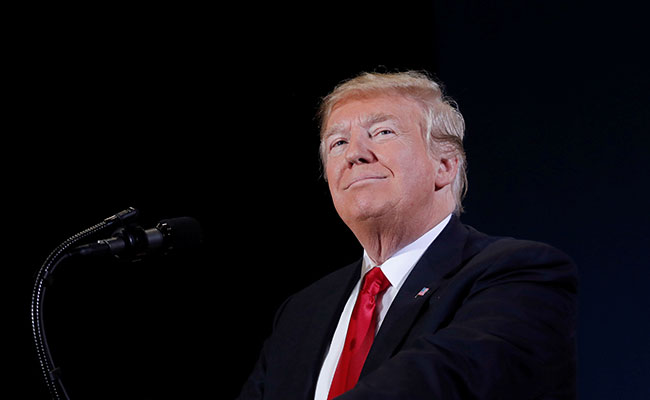 Donald Trump made it to Moscow in 2013, bringing his Miss Universe beauty pageant to the capital. (File)

It was a dream born in the 1980s: a gleaming Trump Tower in the heart of Soviet Moscow. For Donald Trump, that vision never died, even as he launched a presidential campaign and moved toward clinching the Republican Party nomination in 2016.

On Thursday, his former attorney Michael Cohen told a federal judge that Trump was pursuing a deal to build a Trump Tower in Moscow throughout the first half of 2016 - the very time the candidate was stepping out on the world stage as a political figure and breaking with the GOP by praising Russia and its president, Vladimir Putin.

Trump's attempt that year to expand his brand into Moscow capped a 30-year-long effort by the celebrity mogul to do business in Russia. His refusal to give up that ambition as he was campaigning for the White House now colors his public embrace of Putin, whose help Cohen sought for the project.

Again and again, Trump pursued his Russia project, traveling to Moscow and unveiling four ultimately unsuccessful plans to put his name on a building in the Russian capital before he announced he would run for president.

"Russia is one of the hottest places in the world for investment," Trump said in a 2007 deposition. "We will be in Moscow at some point."

While running for president, Trump spoke highly of Putin and criticized the Russian president's adversaries, including international organizations like NATO and the European Union. His rhetoric seldom wavered, even as evidence began to emerge that Russia was interfering in the 2016 campaign to boost Trump's effort.

At the time, Trump repeatedly insisted that he did not have financial ties to Russia. "How many times do I have say that?" he said at a news conference in July 2016, just after WikiLeaks published thousands of emails hacked by Russian operatives from the Democratic Party. "I have nothing to with Russia, I have nothing to do with Russia."

He added in a tweet: "For the record, I have ZERO investments in Russia"

But his assertions belied years of Trump's failed efforts in Russia. The final attempt led by Cohen began in September 2015 and apparently ended on June 14, 2016, according to court documents - the same day The Washington Post broke the news that Russia was suspected to be behind a hack of the Democratic National Committee.

Trump traveled to Russia for the first time in 1987, as the Soviet Union began to open to more Western investment but many American remained wary of the communist leadership. According to his memoir, "The Art of the Deal," he and his then-wife Ivana scoped out possible sites for a luxury hotel that he wanted to build in a joint venture with the Kremlin's hotel and tourism agency.

In 1996, Trump was back, this time promising to build in the heart of post-Soviet Moscow in partnership with a group of US tobacco executives. The group drew up architectural plans and had meetings with city leaders. But again, it fizzled.

By 2005, Trump had found a new partner: a company called the Bayrock Group that had opened offices in Trump Tower two floors below his own executive suite and had clinched deals to build Trump-branded properties in several US cities.

The company's point person on the project was Felix Sater, a Russian-born businessman with a checkered past. He had served a year in prison after a 1991 bar fight. In 1998, he pleaded guilty to one count of racketeering in a $40-million Mafia-linked stock fraud.

But Sater had cooperated with the government in various criminal and national security matters, allowing him to keep his plea under seal and remake himself as a respectable Trump business partner.

The Trump Organization gave Bayrock a one-year exclusive deal to hunt for land in Moscow for a development, according to documents obtained by The Post.

Sater said in a 2008 deposition that he located a group of interested Russian investors, as well as a possible site for the project - a shuttered pencil factory that had been named for American radicals Nicola Sacco and Bartolomeo Vanzetti, who were convicted of murder and executed during the "Red scare" that swept the United States after World War I.

"I showed him photos, I showed him the site, showed him the view from the site. It's pretty spectacular," Sater said of Trump in the depositions. "It was more of verbal updates when I'd come back, pop my head into Mr. Trump's office and tell him, you know, 'Moving forward on the Moscow deal.' And he would say, 'All right.' "

That deal fell apart as well, but it did not rupture Sater's relationship with the Trump Organization. A year later, Sater testified, Trump asked him to accompany his adult children, Ivanka and Donald Trump Jr., on a trip to Moscow.

By 2007, Trump had hired Cohen to serve as one of his top lawyers. Cohen and Sater had attended high school together and were close.

The failures in Russia were a source of frustration for the Trump Organization at a time it was otherwise expanding around the world, buoyed by the success of Trump's reality television show, "The Apprentice." He signed deals to build Trump Towers in Istanbul and Panama in 2006 and in the Dominican Republic in 2007.

Speaking to a real estate conference in 2008, Trump's son Donald Trump Jr. explained that building in Russia was tricky.

"As much as we want to take our business over there, Russia is just a different world," he said. "It is a question of who knows who, whose brother is paying off who. . . . It really is a scary place."

But the younger Trump insisted that the company was determined to make it work. He had traveled to Russia six times in the previous 18 months, he told the investors. "Russians make up a pretty disproportionate cross-section of a lot of our assets," he said, explaining that Russians found the Trump name appealing and were buying units in the company's buildings around the world.

Donald Trump finally made it to Moscow in 2013, bringing his Miss Universe beauty pageant to the Russian capital.

Costs for the elaborate event were born by a Russian billionaire developer, Aras Agalarov, and his pop star son Emin - often called the Trumps of Russia for their tendency to put their own name on projects.

Trump spent 36 hours in Moscow in November 2013, meeting with Russian business leaders and hoping for a sit-down with the Russian president. Putin declined, citing a delayed meeting with the King of Holland.

As the event concluded, Trump announced he had once again reached a preliminary deal to build in Moscow - this time with the Agalarovs as partners. "I had a great weekend with you and your family," Trump tweeted to Agalarov as he left Russia. "TRUMP TOWER-MOSCOW is next."

The deal did not advanced beyond preliminary talks, hampered by a cooling Russian economy and then Trump's busy campaign schedule, the Agalarovs told The Post in a joint interview in spring 2016.

But the billionaire and his son remained in contact with Trump, and in June 2016, they helped arranged for Trump Jr. to take a meeting with a Russian lawyer as his father pursued the presidency.

The candidate's son was told the lawyer would bring dirt about Democrat Hillary Clinton as part of a Russian government effort to help Trump. "If it's what you say, I love it," Trump Jr. responded.

By then, Cohen had been working with Sater for months to once again get a Trump development in Moscow off the ground. A person close to Cohen said he knew how badly Trump wanted a Moscow project and believed he would score a major coup with his boss if he could get it done.

Cohen has said Sater approached him with the proposal in September 2015. He had found a new Russian partner, a Moscow-based developer called I.C. Expert Investment Co. and its chairman, a former Sater business partner named Andrei Rozov.

It was not the only Moscow project fielded by Cohen while his boss ran for president. Cohen had also been forwarded in October 2015 another a 13-page proposal from Sergei Gordeev, a Moscow real estate billionaire and former legislator. The proposal was delivered by an international financier with whom Cohen had worked previously, whose spokeswoman said last year that Cohen rejected the offer because he was already working with Sater. She declined to comment Thursday about whether that businessman, Giorgi Rtskhiladze, has been interviewed by special counsel Robert Mueller.

That same month, Trump signed a letter of intent to proceed with the Sater project, Cohen has said. It came on the same day Trump participated in the third Republican debate.

Both Cohen and Sater believed the project could be used not only to help Trump's bottom line, but also his electoral efforts.

"Our boy can become president of the USA and we can engineer it," Sater to Cohen in a 2015 email obtained by The New York Times and confirmed by The Post. "I will get all of Putins team to buy in on this, I will manage this process."

In the messages, Sater claimed he had lined up financing with VTB Bank, under U.S. sanctions at the time for allegedly undermining democracy in Ukraine. In another email, Sater told Cohen they could host a ribbon-cutting ceremony in Moscow and suggested showing Russian contacts video clips of Trump praising Russia on the campaign trail.

"I will get Putin on this program and we will get Donald elected," Sater wrote. "Americas most difficult adversary agreeing that Donald is a good guy to negotiate."

Cohen emailed Dmitry Peskov, a top Putin aide and spokesman, to enlist Russian government help to secure land and permits, according to documents submitted to Congress. Cohen said he did not recall receiving a response, and the project died.

On Thursday, Cohen acknowledged those statements were false and pleaded guilty to lying to Congress. He said that after reaching out to Peskov, he spoke to the Russian official's personal assistant for 20 minutes. She took notes and promised to look into the issue, according to a court document filed Thursday.

The next day, Sater emailed Cohen. "It's about [the President of Russia] they called today," he wrote, according to the the filing.

Cohen also admitted that he discussed the project with Trump more frequently than he told Congress, and briefed his children as well.

Six months later, Cohen agreed to travel to Russia to attend an economic forum in St. Petersburg at Sater's recommendation, only reversing course and canceling the trip on June 14, 2016.

Trump told reporters Thursday that Cohen was lying about key details. But he added that he saw no reason why running for president meant he could not also pursue his business ambitions.

"There was a good chance that I wouldn't have won," he said, "in which case I would have gone back into the business and why should I lose lots of opportunities?"