The Reddit User Behind Donald Trump's CNN Meme Apologized, But #CNNBlackmail Is The Story Taking Hold

#CNNBlackmail was the top trending Twitter topic Wednesday morning, thanks to the efforts of a furious Trump internet, which had concluded that the user's apology was forced by a "threat" from CNN. 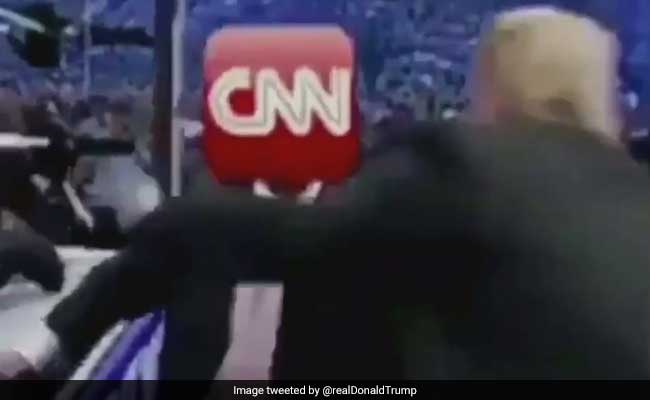 The Reddit user said he never intended his anti-CNN meme - you know, the one tweeted by President Donald Trump in which the now-president beats up CNN in a wrestling match - to become a call for violence against journalists.

"I am not the person that the media portrays me to be in real life," user HanA--holeSolo wrote in an apology, posted to the popular pro-Trump r/The_Donald subreddit Tuesday. "I was trolling and posting things to get a reaction ... and never meant any of the hateful things I said in those posts."

The apology, which has since been deleted along with the user's entire Reddit account, ended with a call for peace: "This is one individual that you will not see posting hurtful or hateful things in jest online. This is my last post from this account and I wanted to do it on a positive note and hopefully it will heal the controversy that this all caused."

#CNNBlackmail was the top trending Twitter topic Wednesday morning, thanks to the efforts of a furious Trump internet, which had concluded that the user's apology was forced by a "threat" from CNN. Their evidence? A story CNN itself published, detailing its attempts to contact and identify the anonymous Reddit user ahead of their apology, whose offensive posting history suddenly became part of a national news story.

The part of the article that infuriated the Trump internet - and people on both sides of the political spectrum, who questioned the ethical standards of the network's decision - had to do with how CNN described its reasoning for not identifying the Redditor by name. Reporter Andrew Kaczynski wrote that CNN had spoken with the person behind the account, and would not identify the user because "he is a private citizen who has issued an extensive statement of apology," who had promised not to continue flooding the internet with offensive memes.

But, he wrote, "CNN reserves the right to publish his identity should any of that change."

Like many online controversies of this era, it's difficult to explain exactly what's going on here in one smooth narrative. The ethical question of whether a news outlet should withhold the identity of a private citizen who posted extremely offensive things online on the apparent condition that they behave better in the future is one that resonated well beyond the bubble of the Trump internet. But the meme that Trump supporters have picked up and spread is a mix of fact and fiction, of genuinely outraged conservatives and the gleeful meme-literate arsonists who just like to see the internet burn with fury.

The media has often struggled to cover Trump's online supporters, whose skepticism of mainstream publications has evolved into a total rejection of the idea that places like CNN are even trying to report the truth. At the head of that rejection is the president himself, who regularly tweets that news outlets he doesn't like are "fake news." Media ethics experts who look at CNN's article on all this might discuss it in the context of a long and tricky media discussion about outing anonymous, racist internet trolls. On the Trump internet, however, the subtext of the meme is that "blackmailing" sources is a normal part of mainstream journalistic practice. The difference is, they believe, that someone finally got caught.

Overnight, the r/The_Donald board that once hosted the user's apology and plea for peace was filled up with even more anti-CNN memes, and posts calling for a full-on war against the network. The Trump-supporting Redditors picked up an idea from 4chan's /pol/ board, organizing mass calls and tweet-storms to a long list of companies, demanding they stop advertising on CNN. The story soon spread to Trump-friendly publications like Gateway Pundit and Infowars. It was the front page of Drudge,

The CNN reporter, Kaczynski, tweeted Tuesday that the line about withholding the troll's identity is being "misinterpreted":

"This line is being misinterpreted. It was intended only to mean we made no agreement w/the man about his identity."

Meanwhile, a tantalizing but extremely unconfirmed detail began to attach itself to the meme. Was the user a 15-year-old kid, as many posts on the #CNNBlackmail hashtag repeat as fact? Even though CNN, and screenshots of the user's own Reddit history seem to contradict this, indicating that the user is significantly older, the notion that CNN had just threatened to doxx a minor was extremely shareable among Trump supporters, including one of the president's own sons, Donald Trump Jr.:

"So I guess they weren't effective threatening the admin so they go after & bully a 15 y/o? Seems in line w their 'standards'"

Others called for a very personal form of revenge against CNN, and Kaczynski specifically. A link to a pastebin page that appeared to contain the personal identifying information of Kaczynski, some of his family members and his colleagues circulated on 4chan Wednesday morning. And the neo-Nazi Daily Stormer website called for even more. A popular post called for CNN employees to quit their jobs and denounce the network, or face consequences if they didn't:

It's a particularly threatening version of an inversion that is common on the internet today: Keep reporting on the Trump internet, and the Trump internet will decide it's "reporting" on you. And many mainstream outlets are still struggling to contend with it.

(Except for the headline, this story has not been edited by NDTV staff and is published from a syndicated feed.)
Comments
Donald Trump CNN tweetDonald Trump CNN MemeCNNBlackmail