The Mystery Of Julian Assange's Cat: Where Will It Go? What Does It Know?

While it's unclear exactly what happened to Julian Assange Embassy Cat, multiple sources have indicated that it long ago left its home. 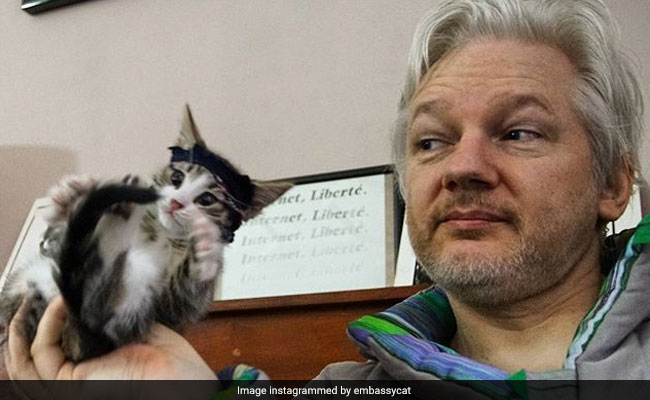 Julian Assange kept a lot of secrets pent up with him in a cramped corner room at the Ecuadoran Embassy in London. But as his seven-year tenure there ended ignominiously on Thursday, one final mystery captured the attention of the international community.

What will happen to Embassy Cat?

The asylum seeker's furry friend was Assange's only consistent companion during some of his lonely years as a self-styled political refugee. The cat had a significant Internet following of its own - though its views hewed suspiciously close to its human's - and it was apparently a fixture at the embassy, with a penchant for pouncing on Christmas tree ornaments and for defusing tension as the WikiLeaks founder tangled with a bevy of world leaders. It was named for its famous home, but occasionally went by "James" or "Cat-stro" after the Cuban leader Fidel Castro's death in 2016.

So when British police stormed the Ecuadoran Embassy, arrested Assange and took him into custody after a U.S. federal court unsealed an indictment charging him with conspiracy, many worried about the fate of the feline.

Would the cat's asylum end, too? Or was it just beginning? Would someone adopt it, or would it also face extradition to the United States? Would it fall victim to a vast conspiracy? Did it know too much?

"Is Julian Assange's cat going to be okay though?" one person asked.

"I do hope that someone looks after his cat, who must be very confused about all this," another said.

A third simply stated: "Am worried about ... his cat."

While it's unclear exactly what happened to Embassy Cat, multiple sources have indicated that it long ago left its home.

Italy's la Repubblica newspaper reported in November 2018 that the cat was gone. But, according to the paper, its departure was for its own good, a benevolent gesture by its owner. The author, who visited Assange for the story, wrote that "Not even the cat is there anymore. ... Assange has preferred to spare the cat an isolation which has become unbearable and allow it a healthier life."

Sputnik News, the Russian government-funded Kremlin organ and diligent reporter of Embassy Cat developments, said it had contacted the Ecuadoran Embassy about the cat and a spokesperson confirmed that it has been gone for months.

"It is not here since September, I think," the official told Sputnik. "It was taken by Mr. Assange's associates a long ago . . . It is not here. We are not a pet store, so we do not keep pets here."

James Ball, an early employee of WikiLeaks who defected after three months at the organization, said on Twitter that the embassy gave the cat to a shelter "ages ago." He also wrote that he "genuinely offered to adopt it," though it doesn't appear that Assange took him up on it.

But the person closest to Assange to comment on Embassy Cat, a member of his legal team, said Assange gave the cat to a family member after the Ecuadoran Embassy threatened to take the pet to a shelter.

"Ecuador also threatened to put Assange's cat in the pound," said Hanna Jonasson in a tweet. "Insensed at the threat, he asked his lawyers to take his cat to safety. The cat is with Assange's family. They will be reunited in freedom."

In 2018, the Ecuadoran Embassy chastised its most famous tenant, giving Assange a set of house rules that instructed him to clean his bathroom and take better care of his cat. The rules warned him that he must look after its "well-being, food and hygiene," or risk losing it, the BBC reported.

If reports of the cat being mistreated are true, then it's likely happier in its new home, wherever that is, said John Bradshaw, a scholar and expert on cats, dogs and their relationships with humans.

"It seems quite possible that the cat may not have been particularly attached to Mr. Assange anyway," Bradshaw told The Washington Post. "If it's already been moved, I would guess that it is missing the Embassy more than it misses him."

Other media reports have suggested that the cat is less a companion and more of a public relations strategy. Assange has told tabloids that the cat was a gift from his children, but a source who allegedly knows him well told the New Yorker something quite different.

"Julian stared at the cat for about half an hour, trying to figure out how it could be useful, and then came up with this: Yeah, let's say it's from my children," the source said. "Everything is P.R.-everything."

As for the new owners, Bradshaw advised them to keep the cat as an indoor-only pet, since it grew up as such in the embassy. If allowed outside after its repatriation, it may try to escape and return to its old home in the London neighborhood.

"It will probably try to get back to Knightsbridge," Bradshaw said, "and likely fall foul of the traffic."

(This story has not been edited by NDTV staff and is auto-generated from a syndicated feed.)
Comments
Julian AssangeJulian Assange cat