The Girl Who Couldn't Stop Coughing

Mimi had a rare inherited disease called primary ciliary dyskinesia, or PCD, which is believed to affect about 1 in 15,000 Americans. 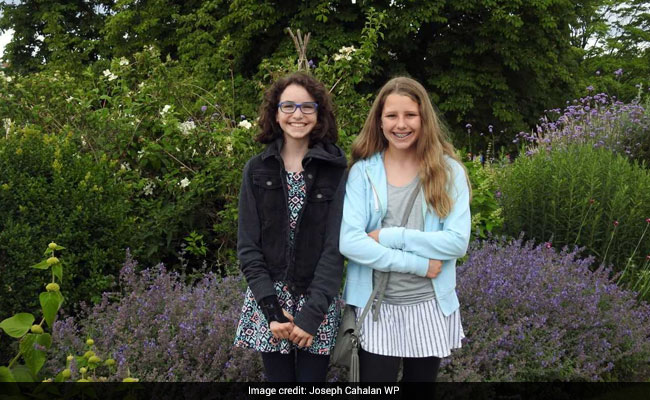 Why does she keep coughing, Eva Shea wondered about her daughter Mimi, as she had countless times. And why did the preschooler sound as though she had a two-pack-a-day cigarette habit?

Over the years, Shea had asked about the wet cough during frequent visits to the pediatrician and specialists across northern Virginia. Although doctors sometimes seemed concerned, many were reassuring. Kids get frequent respiratory infections, it doesn't bother her, nothing showed up on tests, they variously told Shea.

But Shea, who also has two older daughters, one of whom has asthma, said she "always had a nagging feeling that something was not right."

In 2016, shortly after Mimi turned 12, a new specialist weighed in. He zeroed in on a key and largely overlooked aspect of her medical history. Then he told Shea he was virtually certain what had caused Mimi's lifelong respiratory problems. Sophisticated testing confirmed it.

Although Mimi is now receiving effective treatment, her parents would have preferred that the correct diagnosis hadn't taken a dozen years. Early detection might have spared their daughter from an irreversible consequence.

"We would have been able to treat her much earlier," Shea said. "The key is awareness."

From the moment she was born in August 2004 at Inova Alexandria Hospital, Mimi had had trouble breathing. Delivered by Caesarean section, she was whisked to the neonatal intensive care unit because her skin had a bluish tinge indicative of cyanosis and she was in respiratory distress. After nine days in the hospital, she was sent home with three medicines, a machine to monitor her breathing and a diagnosis of severe reflux.

By her second birthday, Mimi had outgrown the reflux. But her mother noticed that she always seemed congested. The pediatrician wasn't concerned even though she had frequent respiratory infections. That wasn't surprising in a young child with two older siblings.

At age 4, after frequent ear infections, Mimi received her first set of ear tubes. A second set followed a year later. The ear, nose and throat specialist also removed her adenoids in case they were triggering her ear infections.

None of the procedures made a difference. "It seemed she was always getting sick," her father, Robert, recalled. A cold invariably morphed into something more serious, usually a sinus infection.

At her annual checkup when she turned 8, the pediatrician expressed concern about Mimi's congestion. He recommended she see a pediatric allergist.

A full work-up was unrevealing. Other than mild allergies to cockroaches and dust, the allergist found nothing that would account for her congestion. His diagnosis: chronic sinusitis. He recommended a 60-day course of steroids to reduce inflammation and antibiotics to eradicate infection.

"He said, 'Let's really bang out this infection and treat it very, very aggressively,' " Shea remembers.

But a sinus CT scan performed after Mimi had taken medications for two months still showed persistent sinusitis. The allergist, Shea recalled, "shrugged his shoulders and said, 'I'm out of my bag of tricks.' "

Despite her frequent respiratory infections, Mimi kept going. "The problems didn't seem to slow her down," her mother said, noting that she was playing soccer.

In 2013, Mimi saw a new, young pediatrician for her annual checkup. "She was very alarmed," Shea recalled. She heard lots of crackles when she listened to Mimi's lungs, which could indicate an obstruction or a serious disease such as pneumonia.

She recommended that Mimi get a lung X-ray to check for an obstruction. She also urged that Mimi be tested for cystic fibrosis, a genetic disease that causes persistent lung infections.

Both tests were negative. The Sheas were particularly relieved to learn that Mimi did not have cystic fibrosis, even though they were no closer to an answer.

"Every time I would go to one of these specialists," Shea recalled, "I would think, 'Okay, this is going to work!' " And when it didn't, "I kept thinking, 'What the hell - why can't this get fixed?' It was very frustrating."

When Mimi turned 10 in 2014, her pediatrician referred her to a second ENT specialist.

He told the Sheas she could benefit from endoscopic sinus surgery. The operation, reserved for severe, recurrent infections that don't respond to other treatments, involves cleaning out diseased tissue and fixing anatomic defects such as a deviated septum.

"She's a perfect candidate for this," Shea remembers the ENT saying. He said he had performed the same operation on his own daughter, a year older than Mimi, with a good result.

Mimi underwent the outpatient surgery in October 2015. The outcome was depressingly familiar: Her congestion and cough remained.

"He was baffled that she wasn't markedly better," Shea recalled.

The ENT referred Mimi to a pediatric immunologist.

After tests showed nothing to suggest an immune deficiency, the immunologist ordered a high-resolution CT scan of Mimi's chest. The result was dismaying: There was evidence of a serious lung problem called bronchiectasis.

An irreversible condition that causes widening and scarring of the airways, bronchiectasis impairs the ability of the lungs to clear out mucus, creating a breeding ground for bacteria that leads to repeated, damaging lung infections.

The immunologist also ordered a sputum test, which revealed a strain of staphylococcus bacteria in Mimi's lungs.

The results indicated that the source of Mimi's problems was not her ears or her sinuses, but rather her lungs.

Her next stop was a fifth specialist: pediatric pulmonologist Sunil Kapoor, section chief of pulmonology at Inova Children's Hospital.

"I brought in a box of all of her records," she recalled. "He listened to me recount everything, and then after about 15 minutes he asked me how her birth was."

After learning that Mimi had suffered from respiratory distress at birth and that she had a more or less constant cough, Shea remembers Kapoor telling her he knew what was wrong.

"She hit all the boxes," he recalled.

Mimi had a rare inherited disease called primary ciliary dyskinesia, or PCD, which is believed to affect about 1 in 15,000 Americans. Among the telltale symptoms: a persistent year-round wet cough, nasal congestion and frequent respiratory infections. Mimi's breathing problems at birth were a key indicator, as was bronchiectasis. About 50 percent of children with PCD have it.

Sometimes mistaken for cystic fibrosis, PCD affects the hairlike structures called cilia that line the airways, reproductive tract and other organs. When cilia, which move like waves, are damaged, they are unable to effectively remove mucus and bacteria from the airways. That can trigger infections in the lungs, sinuses and ears. PCD results from faulty genes inherited from both parents. Carriers typically show no symptoms; Mimi's case is the first in her family.

PCD ranges in severity; Mimi's case is considered fairly mild. The disorder can be hard to diagnose because it mimics common, less-severe conditions such as chronic sinusitis. A definitive diagnosis involves complex tests including a nasal biopsy or genetic testing.

"I went home and Googled it, and every single symptom listed for PCD was exactly the symptoms Mimi had since she was born," Shea said. "It honestly took my breath away."

Mimi immediately began physical therapy for her chest with an oscillation vest that helps to thin mucus, along with nasal saline treatments and periodic doses of antibiotics.

Kapoor referred Mimi to the National Heart, Lung, and Blood Institute, one of 10 PCD centers in the United States. She is enrolled in a research study and last year underwent genetic testing.

"Once we made this diagnosis, her life was never going to be the same," Kapoor said.

Shea said she and her family are still coming to grips with the implications. PCD is not curable and could impair Mimi's fertility, because damaged cilia affect the fallopian tubes.

For a teenager, the disease can be a particular challenge. Mimi's twice-daily regimen takes more than an hour a day.

"She's handled the diagnosis really, really well," Kapoor said. "She seems to have a really grounded relationship with her folks."

One of the worst things about PCD, Mimi said, is having to get up earlier than she would otherwise "to do my routine." Having PCD, she added, is "hard in some ways," but she notes that her friends are supportive and don't treat her differently because of it.

Her parents have tried to ensure that her life remains as normal as possible. They signed off on a two-week trip to South Africa last summer with Mimi's maternal grandparents, a family tradition when celebrating a 13th birthday. Mimi took along her equipment, which malfunctioned once.

"We felt like it was the trip of a lifetime," her mother said, acknowledging that she was nervous about letting her go. Mimi came home sick and had to be hospitalized for a week, but she and her parents say the experience was worth it.

Although PCD is rare, the pulmonologist noted that it remains underdiagnosed.

"When you have a pattern of chronic wet cough that doesn't seem to get better no matter what you do, that's when you want to start" considering PCD, he said.

Had Mimi been diagnosed earlier, Kapoor suspects, some of the damage to her lungs might have been avoided.

Promoted
Listen to the latest songs, only on JioSaavn.com
"A little bit younger would have bit a little bit better," he said.