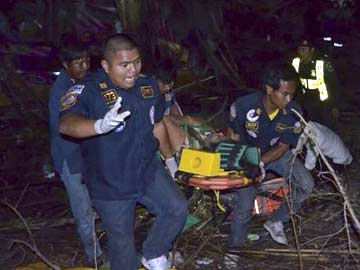 In this photo taken Monday, March 24, 2014, Thai charity workers carry an injured bus passenger to an ambulance during a road accident in Mae Sot, northern Thailand

From April 11 to 17, also known as the "seven dangerous days," 2,992 road accidents happened across Thailand, up 5.8 percent from the same period last year, according to the department.

The death toll declined by 0.31 percent year-on-year, while the number of injuries rose by 6.09 percent, Xinhua reported.

Promoted
Listen to the latest songs, only on JioSaavn.com
Drunk driving turned out to be the main cause of the accidents, followed by speeding, the department said.