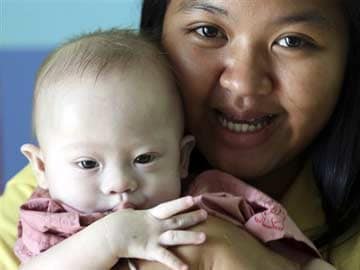 In this photo taken Aug. 3, 2014, Thai surrogate mother Pattaramon Chanbua, a 21-year-old food vendor, poses with Gammy, a nine-month old baby boy who was born with a Down syndrome, at a hospital in Sri Racha, Chonburi province, southeastern Thailand.

Bangkok: For thousands of well-off childless couples, the dream of having a baby is often realised in places like Thailand and India. Ready to help them are young women who become paid surrogates, their wombs offered up as vessels that can safely carry the babies until they are born.

Most of the time, it's a bargain that suits both parties - unless something goes wrong.

The case of an Australian couple accused of abandoning their baby with his Thai surrogate mother after discovering the child had Down syndrome - and taking home his healthy twin- has cast unfavourable light on the largely unregulated business of commercial surrogacy.

The suggestion that the Australian biological parents wanted to raise only the healthy child and left behind her blond, brown-eyed brother, who also has a congenital heart condition, sparked outrage worldwide.

Couples seek surrogacy away from home mainly for legal and financial reasons. Some nations tightly restrict surrogacy, or ban it outright. Others have no surrogacy laws, though national medical boards often deal with it in their codes of ethics.

Laws vary widely, and there is no guarantee that a contract - or the child resulting from the arrangement - will be recognised in another country. In the US, some states forbid commercial transactions and stipulate that any contract for a surrogate birth is unenforceable. Other states, including California and Illinois, are receptive to commercial surrogacy and have regulations to help enforce agreements.

In Thailand, wealthy couples from Hong Kong, Taiwan and Australia - where commercial surrogacy is banned - are major customers, said Nandana Indananda, a Bangkok-based lawyer who headed a project to draft a Thai surrogacy law which was submitted Thursday to the country's military junta for consideration.

Contributing to Thailand's popularity is the large number of impoverished women who will carry babies for a price, and the availability of doctors with good reproductive medical skills, Nandana said.

India has also emerged as a major centre for low-cost surrogacy thanks to its skilled doctors, medical infrastructure and vast population of poor women willing to act as surrogates. A full-term surrogate pregnancy normally costs $18,000 to $30,000 in India, doctors say, with about $5,000 to $7,000 going to the surrogate.

India legalised commercial surrogacy in 2001, but has just a handful of regulations governing the $1 billion-a-year industry. Among them is a 2012 mandate that prohibits some people - including gay couples, single men and women, unmarried couples and couples from countries where surrogacy is illegal - from hiring a commercial surrogate in India.

Rights activists say the absence of regulations has led to widespread exploitation.

"Women who miscarry are not paid anything at all in many cases," said Ranjana Kumari, director of the New Delhi-based Centre for Social Research. "Instead, the agents try to shift the blame to the woman and tell her it is her fault that she has miscarried."

Manasi Mishra, author of two government-funded reports on surrogacy in India, said many women have been cheated by agents and clinic owners and received a fraction of what they were promised.

"There is a dark side to this business," acknowledged a Thai employee of the agency that arranged the deal involving the Down Syndrome baby. Surrogate Pattaramon Chanbua, a 21-year-old food vendor with two young children of her own, says she has not been paid the full $9,300 fee she was promised.

"But most of the time I have seen happiness," said the woman, who asked not to be identified because it might jeopardise her job.

For many surrogates, the payments can mean a new house or better education for their children, with the money often more than they could save in a decade, Mishra said.

"If they want a lot of contact with an English-speaking surrogate, then they're going to go to America, but that's a very expensive process," she said.

India and Thailand are cheaper and closer to Australia than the US. The cost for a baby by surrogate in Asia averages $60,000 to $70,000, including airfares and accommodation; in the US, it's around $150,000, Kunde said.

In many cases, international surrogacy is a last resort. For 39-year-old Australian Kylie Young and her 40-year-old husband, Cameron, finding a Thai surrogate to carry their twins was a blessing at the end of an agonising quest for a child.

The couple began trying to conceive immediately after marrying in August 2002, but eight years of in-vitro fertilisation and two attempts by a friend who'd offered to serve as their surrogate failed to produce a baby.

After learning about overseas surrogacy online, the Youngs turned to an agent in Thailand to help shepherd them through the process, which cost around $60,000.

The Youngs flew to Thailand for the birth, though Kylie wasn't allowed in the delivery room as her eggs weren't used to conceive the twins. When she finally saw Stella and Luke, she cried. All the effort, she says, was worth it.

The couple spent six weeks in Thailand waiting for paperwork to clear, including applications for Australian citizenship for the babies. During a 10-minute interview at the Australian Embassy, their surrogate gave approval for the Youngs to bring the twins to Australia.

Stella and Luke are now 14 months old, and Kylie has no regrets.

"I couldn't fault anything," she says. "I was lucky. I was one of the mums that had a good experience."

Chinese laws ban medical facilities and personnel from performing surrogacy services, but there is no clear law against private arrangements between couples and surrogate mothers. Such contracts would likely be ruled invalid by a court, however, on ethical grounds.

Chinese authorities have occasionally cracked down on surrogate operations. Still, private surrogacy services are openly advertised on Chinese-language websites - several of them promoting surrogates in countries such as Thailand or the United States. Chinese couples using US surrogates consider it a bonus that their babies will be granted US citizenship at birth.

The underground market has led to problems, often when the surrogates bond with the babies and want to keep them, said Shanghai-based lawyer Wei Xin, whose firm has handled such cases, which are often resolved by the couple paying extra to the surrogate.

Promoted
Listen to the latest songs, only on JioSaavn.com
The tangled web of international surrogacy regulations - or lack thereof - adds up to a legal and emotional minefield for would-be parents. Even Kylie and Cameron Young, who had a happy outcome from their Thai surrogacy experience, acknowledge it was far from simple.

"I don't think people understand when you can't have a family, how hard it is to get children. We were 12 years in the making," Kylie says. "I think people think it's so easy to go through - but it's not."