"I Didn't Deserve This": Teen Hit By Car Because She Was "Mexican"

On Friday, Clive Police Chief Michael Venema said the driver suspected in the case, Nicole Marie Poole Franklin, 42, had confessed to being behind the wheel. 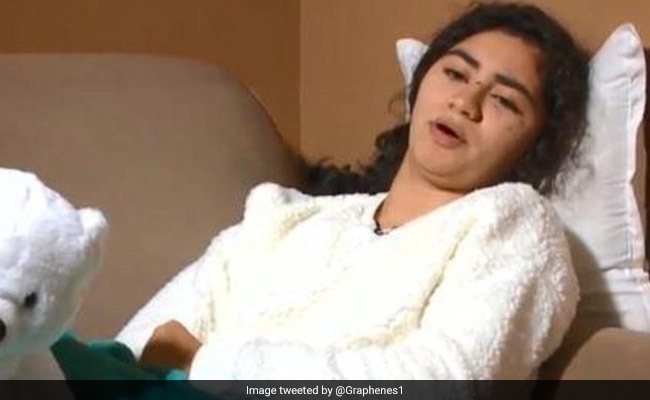 In an interview after the crash, the victim, Natalia Miranda said she didn't remember the impact.

Authorities suspected it was a hit-and-run when a Jeep struck a teenage girl in Iowa earlier this month. The driver veered onto the sidewalk and sped off without trying to help the 14-year-old, officials said, leaving the victim with an array of injuries that kept her out of school for a week.

On Friday, Clive Police Chief Michael Venema said the driver suspected in the case, Nicole Marie Poole Franklin, 42, had confessed to being behind the wheel. Then, Venema said, she went a step further in her admission. Franklin reportedly told investigators she'd run the teenager over intentionally because she was "a Mexican" - a startling acknowledgment that has prompted local advocates to push for a hate crime charge on top of attempted murder.

Addressing reporters about the Dec. 9 incident, Venema said Franklin went on to make a "series of derogatory statements about Latinos" after confessing to the crime. The chief said it was now clear that Franklin had made a determination about the girl's ethnicity before ramming her.

"I want to say in the strongest terms possible that there is no place in our community, or any other for that matter, for this type of hatred or violence," Venema said. "We will work diligently with the family to seek justice."

In an interview days after the crash, the victim, Natalia Miranda, told KCCI that she didn't remember the impact. Natalia said she woke up afterward in the snow, where other children indicated that she had passed out. Fresh scratches and bruises were visible on her face as she spoke.

Natalia has since returned to school, but Venema said the family has requested privacy after learning the attack was intentional. Asked if he was surprised the woman appeared to confess so candidly, Venema replied: "shocked would be an understatement."

"I've been in law enforcement for 35 years, and I get very used to people being a little bit callous or maybe leaving the scene of an accident and not caring about someone who's been hurt if they did so unintentionally," he said. "I was very shocked to hear that this was an intentional act."

Franklin was arrested in an unrelated incident about an hour after she sped off, Venema said. According to the Des Moines Register, Franklin allegedly drove to a West Des Moines gas station that same day and called an employee and customers a racial slur before she threw items at the employee. Already in custody for the West Des Moines arrest, police later matched descriptions of the vehicle in the hit-and-run to Franklin's Jeep.

Jail records indicate that Franklin, who has had previous run-ins with police, was charged with assault, operating under the influence, theft and public intoxication. It wasn't clear Friday if she'd retained an attorney.

In the case of young Natalia, Venema told reporters that police were considering a hate crime charge. Though he emphasized that attempted murder was already "the most serious charge possible."

But the lack of a hate crime charge to this point has concerned local advocates, some of whom told the Register that hateful crimes in the state have trended upward since President Donald Trump was elected in 2016. In a Friday statement, the Council on American-Islamic Relations director Ibrahim Hooper said his organization has reported an "unprecedented spike in bigotry targeting American Muslims, immigrants and members of other minority groups" since Trump became president.

"We condemn this act of violence allegedly targeting a young girl because she was perceived to be part of the Latino community and call on law enforcement authorities to consider bringing hate crime charges in the case," Hooper said. "Along with other minority communities, members of the Latino community have increasingly been targeted by hatred and discrimination in the current toxic political environment."

In November, a Latino man from Milwaukee suffered second-degree burns after a stranger hurled acid at him. The victim in that case, Mahud Villalaz, said the attack occurred after 61-year-old Clifton Blackwell approached him, asking: "Why did you come here and invade my country?"

Blackwell, who is white, was charged with first-degree reckless injury in a hate crime using a dangerous weapon.

Joe Gonzalez, executive director of Latino Resources in Des Moines, told the Register that he'd been contacted about the lack of a hate crime charge in Natalia's case. He decried the false perceptions some people have against Hispanics across the United States.

"People don't realize the contributions they have made to our city, state and country," Gonzalez told the outlet. "When things happen, nobody wants to be lumped in a group ... there are people who do bad things, but you can't lump everybody together."