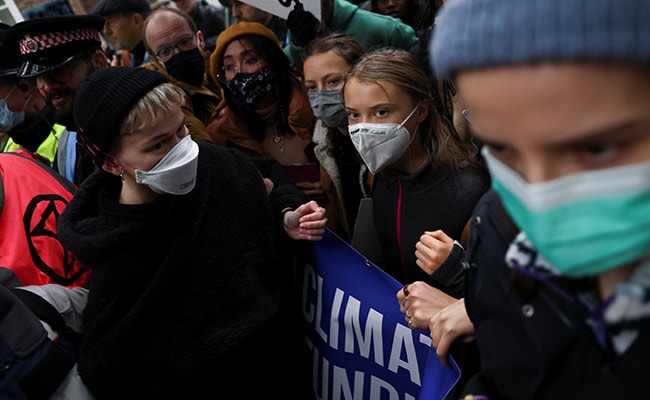 The group posed for picture behind a banner reading "defund climate chaos! Stop funding our destruction!"

Teenage climate activist Greta Thunberg attended a small protest in London on Friday against global banks' role in the fossil fuel industry, ahead of travelling to the upcoming COP26 summit in Scotland.

After being thronged by the hordes of waiting cameras, she briefly rallied with other young activists at the site in London's financial district before leaving without making a speech.

The group posed for picture behind a banner reading "defund climate chaos! Stop funding our destruction!" while others held aloft placards with similar slogans.

"Today we're outside @StanChart asking them to stop funding our destruction," Thunberg tweeted soon after.

The demonstrators had earlier protested at several other sites in the City of London finance hub and were due to hold a vigil later Friday outside the Bank of England.

"We've come here today as a part of this week of action because... the UK and corporations in the UK have been funding climate chaos and the destruction of our islands for decades," Joseph Sikuli, an activist from Tonga in the South Pacific, told AFP.

Organisers say similar protests are being held in 26 countries worldwide ahead of COP26.

The 12-day gathering of world leaders and environmental policy delegates kicks off Sunday in the Scottish city Glasgow.

Thunberg, whose Fridays For Future movement has inspired massive street protests around the world since 2018, has confirmed she plans to join a November 5 march for "climate justice" there.

Earlier this month, she voiced concern the summit would not achieve the landmark agreements needed to combat catastrophic climate change.

"As it is now, this COP will not lead to any big changes, we're going to have to continue pushing," she told AFP on the sidelines of a climate concert organised in Stockholm.

At Least 70 Killed In Airstrike On Yemen Prison