US War Pilot, Shot Down In Iraq 15 Years Ago, Returns As Senator

Tammy Duckworth, 51, is the first female amputee elected to the US Congress. 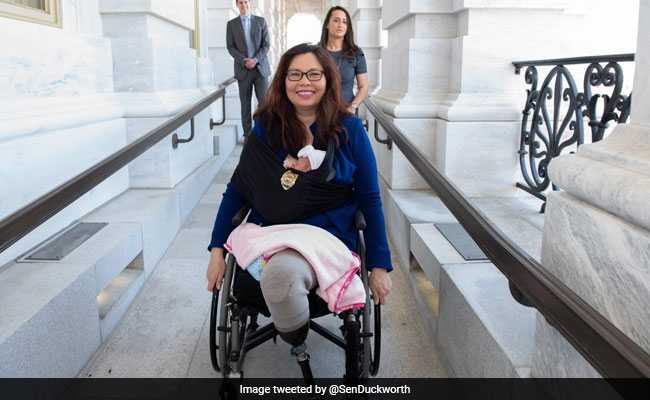 Tammy Duckworth, the helicopter pilot who lost her legs when she was shot down over Iraq 15 years ago, returned to the country for the first time this week as a US senator, her office said Friday.

The decorated US Army veteran led an official congressional delegation to Baghdad, Taji and Arbil, where they sat down with Iraqi leaders, received intelligence briefings from American diplomats and met with US troops.

"Fifteen years ago I deployed to Iraq as an American soldier to fly helicopter missions. This week, I returned in a role I never expected: as a United States senator leading a bipartisan delegation to show our support for the people of Iraq," the Illinois Democrat said in a statement.

"I was proud to join Senators (Johnny) Isakson and (Angus) King representing our nation on this important trip -- and I was even prouder that I was able to leave Iraq under my own power this time."

The trip was not publicly announced until after its completion for security reasons.

The 51-year-old Duckworth, who was born in Thailand, is the first female amputee elected to the US Congress. She almost never got that opportunity.

Her life very nearly ended in Iraq on November 12, 2004, about 120 combat hours into her tour there, when the Black Hawk helicopter she was co-piloting was struck by an insurgent's rocket-propelled grenade.

As a fireball tore through the cockpit, Duckworth tried to help land the chopper, but was unable to use its foot pedals.

King said he was moved at seeing his colleague return to Iraq.

"To witness Senator Duckworth flying once again over the site where she was shot down in 2004 was a moment I'll never forget," King said.

Duckworth's military experience has informed much of her work as a legislator. She has sought to help disabled veterans and ensure payment of troops during federal shutdowns.

She also has been outspoken about the importance of defending members of the Kurdish minority who fought alongside US military forces against the Islamic State.

In January 2018, when President Donald Trump accused Democrats of holding the military hostage over immigration, Duckworth delivered a withering Senate floor speech, saying "I will not be lectured about what our military needs by a five-deferment draft dodger."

(Except for the headline, this story has not been edited by NDTV staff and is published from a syndicated feed.)
Comments
Tammy DuckworthUS senator Tammy Duckworth