Taliban Decree Says No One Can Force Women To Marry, Silent On Education

The Taliban decree says a widow is entitled to an unspecified fixed share of her husband's inheritance. 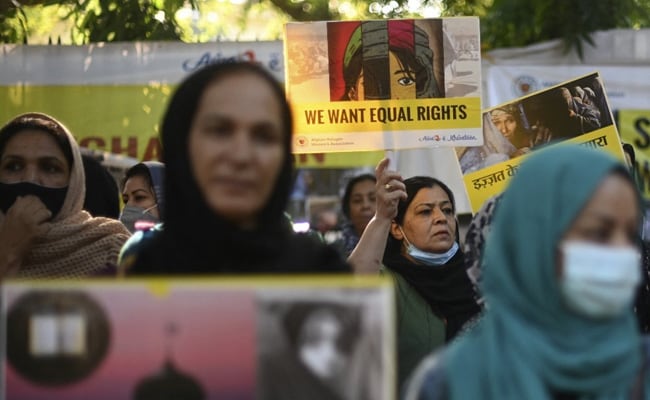 The decree instructs Ministry of Culture and Information to publish material on women's rights. File

The Taliban issued a decree Friday in the name of their supreme leader, instructing Afghan ministries "to take serious action" on women's rights, but failed to mention girls' access to schools.

The move comes after the Islamists seized power in mid-August and as they seek to restore Afghanistan's access to billions of dollars in assets and aid suspended when the previous, Western-backed regime collapsed in the final stages of a US military withdrawal.

The decree centres on marriage and widows' rights, stating "no one can force women to marry by coercion or pressure" and that a widow is entitled to an unspecified fixed share of her husband's inheritance.

It instructs the Ministry of Culture and Information to publish material on women's rights "to prevent... ongoing repression".

Respect for women's rights has repeatedly been cited by key global donors as a condition for restoring aid.

The decree crucially makes no mention of girls' secondary education -- which has been suspended for millions -- or the employment of women, who have been barred from returning to jobs in the public sector.

Women's rights were severely curtailed during the Taliban's previous stint in power, which lasted from 1996 to late 2001.

Women were forced to wear the all covering burqa, only allowed to leave the home with a male chaperone and banned from work and education.

Akhundzada has maintained a very low public profile since becoming supreme leader in 2016, after his predecessor was killed in a US drone strike.

The Taliban on October 30 released a 10-minute audio recording purported to be him addressing a madrassa in the southern city of Kandahar that day.

But some analysts believe he may have been killed one or more years ago.