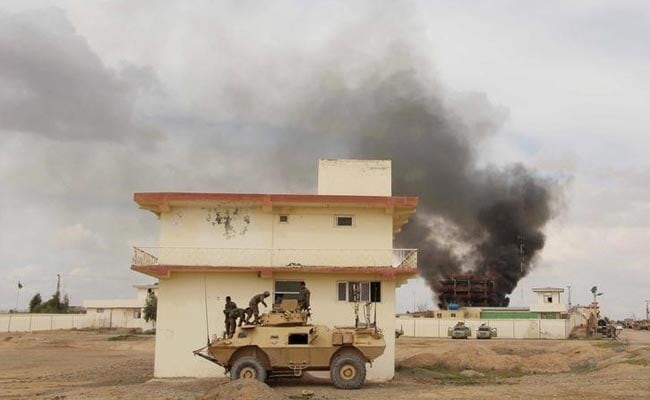 Smoke billows from a building after a Taliban attack in Gereshk district of Helmand province, Afghanistan March 9, 2016. (Reuters Photo)

Helmand has been one of the main targets of the Taliban, which has forced government security forces to pull back from several districts and concentrate around Lashkar Gah and the main highway that runs through the province.

The attack in the Babaji area of Lashkar Gah, during the early hours of the morning, set off a three-hour gunbattle during which the Taliban said they overran two checkpoints, destroyed an armoured personnel carrier and captured a large amount of equipment.

The Taliban said 15 police, including a police commander, were killed and several others wounded, while only one Taliban fighter was killed and another two wounded.

After months of heavy fighting in Helmand over much of the winter, a lull in combat had been seen over the past few weeks, according to Afghan and NATO officials.

However there has been continued heavy fighting in other parts of the country including Kunduz in the far north, Uruzgan, which neighbours Helmand and the central province of Ghazni.

Brigadier General Charles Cleveland, the main spokesman for NATO's Resolute Support mission in Kabul, told reporters last week that many fighters had been working in the Helmand opium fields, which provide one of the Taliban's main sources of income.

However he said that the end of the annual spring harvest in Helmand, which accounts for the biggest share of Afghanistan's opium production, would probably lead to an increase in fighting, possibly as early as this week.

The insurgents, fighting to drive out the Western-backed government in Kabul, now control much of the province and have long operated in Babaji, just to the north of the centre of Lashkar Gah.

The decision to pull security forces back from districts in the north and centre of Helmand was announced in February as a tactical manoeuvre to concentrate strength before launching attacks on the Taliban. However so far there has been little sign of the long-promised offensive.

"We are well equipped and well prepared but we are waiting for an order from the defence and interior ministries to attack the Taliban," Sarjang said.

Afghan special forces have launched some targeted operations and, in one attack last week, freed around 60 prisoners from a Taliban jail in Naw Zad district in the centre of the province.
© Thomson Reuters 2016