Authorities have highlighted the tiny passageway near T-Junction as the most dangerous element of the journey for the "Wild Boars" team. 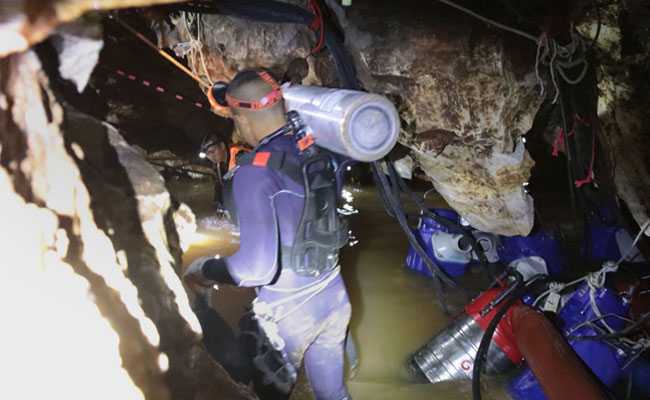 Weather forecasters warned heavy rain was on its way.

Twelve boys and their football coach trapped in a flooded Thai cave will have to squeeze through an extremely narrow tunnel in pitch blackness -- the main "crisis" point that looms near the end of their treacherous escape bid.

Authorities have highlighted the tiny passageway near T-Junction, or Sam Yak in Thai, as the most dangerous element of the journey for the "Wild Boars" team that began Sunday morning, but there are many other potential pitfalls.

The rescue effort is likely to take two to three days to complete, Major General Chalongchai Chaiyakorn, an army commander, told reporters, adding it "depends on other factors like the weather".

Here are some of the challenges that the boys and their coach will face leaving the cave they ventured into on June 23, becoming trapped more than four kilometres (2.4 miles) from the entrance because of monsoon rains.

The boys, aged from 11 and 16, have no diving experience and some can not even swim. They have received training in recent days in preparation for the extraction effort, but they will have to swim using scuba gear through fast-flowing water in darkness, a challenge for even elite divers.

The difficulty of the journey was underscored when a former Thai Navy Seal diver died on Friday after running out of oxygen in the cave.

Thirteen "world class" foreign divers and Thai Navy Seals are involved in the rescue effort. Two divers will escort each of the boys and the coach, aged 25.

Ekapol Chanthawong, the assistant football coach, has been trapped with 12 of his students for 2 weeks in the cave

The sliver of space is 1.9 kilometres (1.2 miles) from the shelf where the boys have been sheltering above the waters. After energy-sapping efforts navigating jagged tunnels and clambering up or down rock walls for this distance, they will confront Sam Yak.

"The biggest crisis spot for diving is on the left from the T-Junction," said Narongsak Osottanakorn, the rescue mission chief, in a briefing on July 2.

"There is a tunnel that has a passageway going up and coming down narrowly and you have to turn a bit and it's very small."

After that though, the tunnels widen, the waters subside, and walking is even possible, according to authorities, with the rest of the journey expected to be relatively safe as they will have reached a forward operating base inside the cave.

The journey will be a long one. The rescue mission chief, Narongsak Osottanakorn, told reporters on Sunday that the first boy was not expected to emerge until 9pm (1400 GMT) on Sunday. This tallies with previous estimates from officials that it would take the divers five hours to reach the ledge where the team is trapped, and six hours for the journey out.

The boys were found dishevelled and weak nine days after they ventured in. Although they have been receiving food and medicine since then, their lack of strength could be a crucial factor in determining their fate. 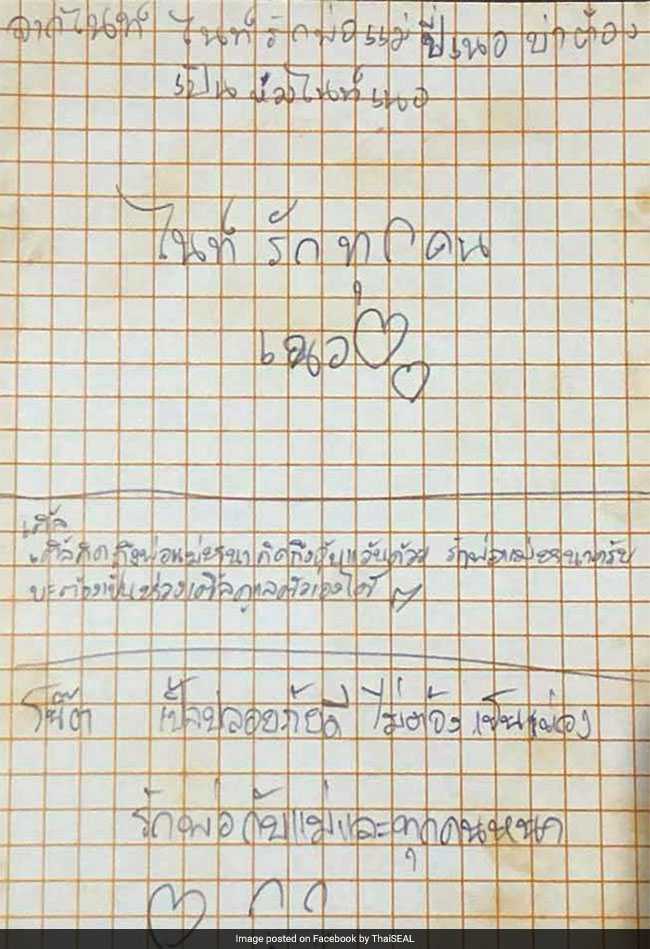 After the boys were located, limited contact was established between them and their families in the form of letters and vidoes

The water in the cave is muddy and unclear, with one diver comparing it to a cafe latte. The labyrinth has no outside light. The boys will be helped through the darkness by guiding rope, torches and the escorts.

Nevertheless, the poor visibility is one of the factors raising concerns about the boys -- already traumatised after spending so long in the cave and having to swim underwater -- potentially panicking.

"The mental side of this has to be one of the top considerations," Andrew Watson, an experienced rescuer of mineworkers, previously told AFP.

"Just one individual panicking can cause a problem," he said.

The operation was launched after several days of relatively mild weather, as more than 100 million of litres of water were pumped out of the cave.

Kobchai Boonyaorana, deputy director-general of the Disaster Prevention and Mitigation Department of the Interior Ministry, told reporters Sunday that the water level in the cave had continued to recede, and that rainfall was less than expected.

But weather forecasters warned heavy rain was on its way, which could flood the area completely. They said there was a 60-percent chance of moderate to heavy rain on Sunday afternoon, and that heavier rain would continue from Monday to Thursday.