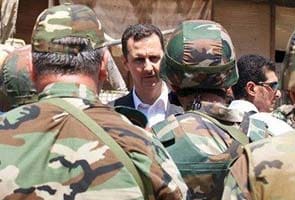 Damascus: Syrian President Bashar al-Assad has dealt a blow to efforts for a peace conference, saying the time is not ripe, as Western and Arab powers prepared to meet today with the fractured opposition.

"No time has been set, and the factors are not yet in place if we want (the US-Russian initiative dubbed Geneva 2) to succeed," Assad told Lebanon-based pan-Arab satellite channel Al-Mayadeen on Monday.

In the lengthy interview, Assad also said he was willing to run for re-election in 2014, in remarks that came soon after US Secretary of State John Kerry said that if he were to win, Syria's civil war would be extended.

"Personally, I don't see any reason why I shouldn't run in the next election," Assad declared.

Kerry said after talks with Arab League officials in Paris such a scenario would never be accepted by the international community.

"He has bombed and gassed people in his country... How can that man claim to rule under any legitimacy in the future?"

Kerry's comments came before Tuesday's meeting in London, which groups the so-called London 11, the core group of the Friends of Syria that consists of Britain, Egypt, France, Germany, Italy, Jordan, Qatar, Saudi Arabia, Turkey, the United Arab Emirates and the United States, together with opposition leaders.

The meeting hopes to persuade the opposition to have a "united position" for a planned peace conference in Geneva next month, British Foreign Secretary William Hague said ahead of the talks.

The Syrian National Council, a key member of the National Coalition, has already said it opposes the conference and threatened to quit the umbrella opposition group if it goes to any meeting attended by members of Assad's regime.

Hague told BBC radio the meeting would encourage the opposition to unite and "go to the Geneva peace talks and stop the blood and talk together as Syrians".

Assad in the interview accused Saudi Arabia of conducting the work of the United States in Syria and also demanded the UN-Arab League envoy to Syria, Lakhdar Brahimi, stick to his mandate and not follow orders from other countries.

Brahimi is currently on a tour of the Middle East to drum up support for the peace conference and was to visit Kuwait on Tuesday for talks with top officials.

On Monday in Baghdad the envoy told reporters that all countries "with interests and influence in the Syrian affair must participate" in the Geneva conference.

In the interview, Assad also denounced as "terrorists" the Muslim Brotherhood movement - whose members are a main component of the Western and Arab-backed National Coalition.

"The solution must be a Syrian solution, regardless of whether foreign powers recognise it. It doesn't matter. What matters is that the Syrian people recognise it," he said.

The Syrian government has been battling to crush a 31-month rebellion triggered by his forces' bloody crackdown on Arab Spring-inspired democracy protests. More than 115,000 people are believed to have been killed in the conflict.

The United States and Russia have been trying to organise the conference on the heels of a landmark agreement they reached for the destruction of Syria's chemical weapons.

On Monday, the head of an international mission to carry out that task arrived in Syria, a statement said.

"Today, the Special Coordinator, Ms Sigrid Kaag arrived in Damascus," to lead a joint mission of the United Nations and the Hague-based Organisation for the Prohibition of Chemical Weapons.

The Dutch UN official leads a team tasked with inspecting more than 20 sites by the end of the month and destroying Syria's chemical stockpiles by mid-2014 under the US-Russian deal.

As diplomats wrangled over the talks, government forces killed a rebel commander, Lieutenant Colonel Yasser Abbud, during clashes at Tafas, in the southern province of Daraa, sources on both sides said.

Promoted
Listen to the latest songs, only on JioSaavn.com
Daraa is the birthplace of an uprising that erupted in March 2011 and flared into the civil war.