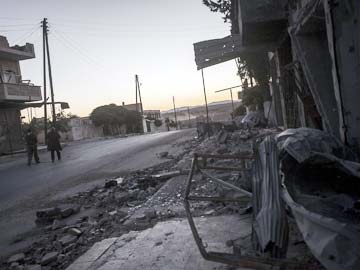 Amman/Arsal, Lebanon: President Bashar al-Assad's forces fired rocket and artillery barrages on a besieged mountain town near Lebanon on Monday in a push to capture the strategic area following advances against rebels in Damascus and in the north of Syria.

In a separate setback for the fighters, a prominent rebel leader died overnight in a Turkish hospital of wounds suffered in an air raid on Aleppo. Abdelqader Saleh, head of the Qatar-backed Sunni Islamist al-Tawhid Brigades, had been working on regrouping fighters in Aleppo before he was killed.

Heavy bombardments hit Qara, 80 km (50 miles) north of Damascus in the Qalamoun mountains, as rebels hid in the rocky terrain, refugees and opposition activists said. Located near the highway linking the capital to Aleppo, Syria's biggest city, the region has been used by rebels to cross from Lebanon.

The Danish Refugee Council, which operates on the Lebanese frontier, said there were preliminary estimates that 10,000 to 12,000 Syrians had fled the bombardment since Friday. Hundreds of them lined up for shelter in bleak winter rain in the Lebanese border town of Arsal on Monday.

Imposing control over the area would help link Damascus with the Mediterranean coast, potentially an important route for chemical weapons to be removed from Syria under an October deal that spared Syria from U.S. attacks.

Diplomats have identified the road as the preferred route for the chemical arms, which pose an unprecedented challenge to dismantle in the midst of an all-out civil war.

Assad's forces have been on the offensive this year after setbacks earlier in the conflict begun in 2011 that has killed 100,000. His troops have made further gains and his diplomatic position has improved markedly in the weeks since the Russian-U.S. chemical weapons deal, which averted U.S. air strikes.

Just a year ago, Western countries were predicting he would be overthrown soon. Now, the West has effectively erased rebel hopes for military aid like the NATO warplanes that helped bring down Libya's Muammar Gaddafi in 2011.

Since then, Assad's forces, backed by Shi'ite militia allies from Iraq and Lebanon's Hezbollah movement, have captured key rebel areas on the edge of Damascus and in Aleppo.

Western countries' support for the rebels has also waned as Sunni Islamist militants, many of them foreign jihadists, have gained prominence among them, changing the diplomatic calculus ahead of a long delayed international peace conference.

U.N. General Secretary Ban Ki-moon said he now hoped the conference could be convened in mid-December.

Rebel group Tawhid announced the killing of its leader Saleh in a statement. Locals described Saleh, a former merchant, as a popular figure and a moderate Islamist who had sought to reconcile other rebel groups with a hardline al Qaeda offshoot, the Islamic State in Iraq and the Levant (ISIL).

An opposition figure from Aleppo, who did not want to be named, said: "Saleh was a charismatic moderate Islamist with popularity in Aleppo. His killing is a gift to the ISIL."

Abu Abdallah al-Hamwi, head of Ahrar al-Sham, a hardline Islamist brigade that works with ISIL, said Saleh had sought his help to heal a rift between the ISIL and other groups.

"He wanted a solution to stop Muslims fighting Muslims," Hamwi said in a statement.

Another opposition group, the Syrian Revolution General Commission, said there was heavy fighting on Monday in Aleppo's Suleiman al-Halabi neighbourhood, where four loyalist troops were killed, and on the Naqqarin front in the east of the city.

Battlefield reports are difficult to verify because access to the front is dangerous and restricted.

A statement by the opposition Qalamoun Media Centre said the bombardment of Qara near the Lebanese border was the heaviest since a government offensive there began on Friday.

"Since 06:00 this morning the bombardment has been non-stop, with all sorts of heavy artillery, tanks and multiple rocket launchers," the statement said.

Mahmoud, a 25-year-old man who fled on Saturday into Lebanon, said the government offensive on Qara appeared to mark the start of a wider campaign in Qalamoun.

"Maybe it was the easiest town for Assad to take, so he could go to Geneva and show he is strong and take whatever he wants," he told Reuters. "Qara is finished."

Lisa Abou Khaled of the U.N. refugee agency UNHCR said workers were scrambling to register the new refugees who arrived at Arsal in Lebanon, fleeing the Qara offensive.

Scattered around the grey, breeze-block town are a few tented camps. Abou Khaled said some arrivals had been put up in a mosque, a wedding hall and another unfinished building.

Major battles in the Qalamoun area have been predicted for months by both sides. The Syrian Observatory for Human Rights, a Britain-based monitoring group, said Hezbollah militants have mobilised to fight in the Qalamoun operation.

But Middle East security officials say there are few signs yet of a massive Syrian armour build-up needed for an all-out assault on Qalamoun. The government may conclude that dwindling rebel supplies from Lebanon mean an all-out assault is not worth the cost.

Promoted
Listen to the latest songs, only on JioSaavn.com
Opening a front there could lead to unrest in neighbouring Lebanon as refugee numbers rise and Sunni Muslim anger grows against the Lebanese Shi'ite Hezbollah group which is helping Assad crush the majority Sunni revolt.

Amer al-Qalamouni, a prominent activist in the region, said the battle may be contained to Qara and not spread to the rest of Qalamoun, where Assad's advantage in armour could be blunted by the mostly rugged terrain. He said: "The two sides are feeling each other out in the Qara battle."
© Thomson Reuters 2013
Comments
SyriaBashar Assad