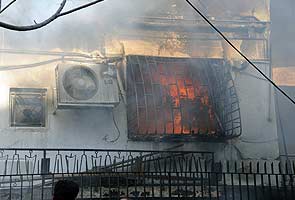 Ceylanpinar, Turkey: Forces loyal to Syrian President Bashar al-Assad bombarded the Ras al-Ain area on the border with Turkey on Sunday, days after the town fell to rebels during an advance that has sent thousands of refugees fleeing for safety.

Helicopters circled above the town and opposition activists said they had strafed targets near the village of Tal Halaf.

The Arab and Kurdish town of Ras al-Ain fell to the Free Syrian Army on Thursday in fighting that sent 9,000 fleeing in a 24-hour period, one of a largest refugee influxes into Turkey of the 19-month civil war.

Tank rounds slammed into the western part of the town on Sunday and a Reuters reporter on the Turkish side of the border saw black smoke rising over the area.
Rebels and forces loyal to Assad exchanged artillery fire and some rounds appeared to land just inside Turkey.

"It's a disaster over there," a man shouted to reporters as he crossed into the Turkish town of Ceylanpinar. Ambulances with sirens wailing ferried wounded people from the Turkish side of the border for treatment at a local clinic.

With winter setting in, over 120,000 Syrians are now sheltering in Turkish camps, deepening alarm in Ankara.

Turkey has already beefed up security on its southeastern border with Syria, in an area of the country where it is also fighting an emboldened insurgency by the Kurdistan Workers' Party (PKK).

Increasingly critical of the failure of world powers to halt the war, Turkey is in discussions with NATO allies over the possible deployment of Patriot surface-to-air missiles to defend against any spillover of violence.

The move could also be a step towards enforcing a no-fly zone within Syria to limit the reach of Assad's air power.

Helicopters were in action on Sunday, opposition activists said, bombing a grain storage area near the village of Tal Halaf outside Ras al-Ain.

Ras al-Ain is part of Syria's northeastern oil-producing province of Hasaka, home to a large part of Syria's Kurdish minority and 600 km (375 miles) from the Syrian capital, Damascus.

"The fighting hasn't stopped. We waited for it to stop, that's why we didn't cross, but we decided to come today because we are all starving," said 35-year-old Reshad, a Kurd who had just crossed into Turkey with his family.

"Everyone is starving over there, there's no bread, no food." Other refugees ventured back to their homes in Syria, reluctant to stay in camps or homes on the Turkish side of the border.

Most of the inhabitants of Ras al-Ain, an agricultural town that has been Arabised under the nationalist rule of President Bashar al-Assad's Baath Party from its Kurdish name of Seri Kaneh, fled to Turkey when rebels captured the area in a push to seize control of frontier regions from Assad's forces.

A statement by Birth of Freedom, a Syrian Kurdish activists' organisation, said clashes were under way between rebels and Assad's forces in the area of Asfar Najjar.

The group said the rebels had committed a "big strategic mistake" by entering Seri Kaneh, where thousands of refugees from other parts of Syria had taken refuge.

Syria's Kurds fear that the mostly Arab rebels will ignore their aspiration to secure some form of autonomy in any post-Assad era.

Ras al-Ain and most of the major towns and cities in Hasaka have seen protests against Assad by Arabs and Kurds, but the Kurdish community has largely stayed away from the armed revolt against his autocratic rule.

The challenge to Syria's central authority has strengthened the Syrian branch of the PKK, which Assad persecuted prior to the revolt when he had good ties with Turkey.

Turkey now accuses Assad of arming the PKK rebels who have mounted a wave of attacks on security forces in southeast Turkey over past few months.
© Thomson Reuters 2012
Comments
Syria