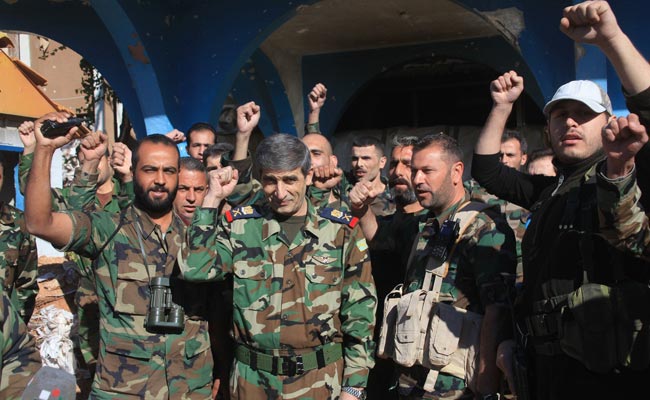 Syrian army Major General Mounzer Zamam celebrates among soldiers at the Kweyris military air base, in the northern Syrian province of Aleppo, on November 11, 2015. (AFP)

Damascus, Syria: Syria's army scored its second important victory in two days on Thursday ahead of international talks in Vienna, but the US warned a deal is unlikely without agreement over the fate of President Bashar al-Assad.

State television announced the capture of Al-Hader, a former opposition bastion near the key Aleppo-Damascus highway, just 48 hours after regime forces broke a siege by the Islamic State group of the Kweyris air base in the east of Aleppo province.

Bolstered by the launch of Russian air strikes in Syria in late September, Assad's forces have launched a series of offensives to regain ground lost in the country's bloody, four-year civil war.

In a deadly reminder of its wider fallout, ISIS claimed responsibility for twin suicide bombings that killed more than 40 people in the southern suburbs of Beirut in the worst such attack for years.

A new push to resolve the Syrian conflict has been gathering pace, with diplomatic officials already arriving in Vienna ahead of talks bringing together some 20 countries and international bodies on Saturday.

They hope to agree on a structure for a political transition and to decide which of the Syrian government, rebel and opposition factions none of whom will be represented at the talks will shape the war-torn country's future.

Spats have already broken out between Russia and Iran, who support Assad, and Western powers who want him out, and as the first working groups gathered on Thursday Moscow criticised the US for trying to divide participants.

Ahead of leaving for Europe, US Secretary of State John Kerry warned the "walls of mistrust within Syria, within the region, and within the international community" meant the Vienna talks were unlikely to clinch a deal.

"I cannot say this afternoon that we are on the threshold of a comprehensive agreement, no," he said in a speech to the US Institute of Peace.

A military source told AFP that regime soldiers, supported by troops from the Shiite Hezbollah movement and Iran, were in "full control" of Al-Hader, a town around 25 kilometres (15 miles) south of Syria's second city Aleppo.

The Syrian Observatory for Human Rights monitor confirmed regime forces had taken control of large parts of Al-Hader, which had been largely controlled by Al-Qaeda affiliate Al-Nusra Front and other allied Islamist groups

"The town is the biggest headquarters for rebel forces in southern Aleppo, and capturing it would bring the army closer to the key Aleppo-Damascus highway," Observatory chief Rami Abdel Rahman said.

The Britain-based monitoring group said both Syrian and Russian warplanes were carrying out strikes in the area, and the regime forces and their allies have advanced west to the town of Al-Eis.

"Today's advance is the most important strategic advance for Syrian regime forces since the Russians began their air strikes," Abdel Rahman said.

"The area is key because it is elevated and if they capture it they will have line of fire sight over the Aleppo-Damascus highway."

Regime forces on Tuesday entered the Kweyris military base, breaking an ISIS siege that had lasted for more than a year.

A military source told AFP Thursday that the army planned to use the airport as a forward operating base for new offensives against ISIS in Aleppo province.

They will focus on the key topic of the meeting drawing up an opposition delegation to negotiate with Assad and determining which rebel groups will be designated as "terrorists".

Both issues are likely to be contentious, with deep divisions between Arab and Western countries, on the one hand, and Russia and Iran, Assad's key allies.

A third working group, focusing on humanitarian questions, is to begin gathering today, the source said.

Moscow has put forward a peace proposal for the talks, which calls for elections after an 18-month constitutional reform process, but Western officials have dismissed the plan as it does not ensure that Assad will be removed from power.

"This can clearly be seen as an attempt to divide participants," she said, noting that countries such as Iran, Iraq and Lebanon were not part of the working groups.

"We cannot accept these rules of the game," she said.