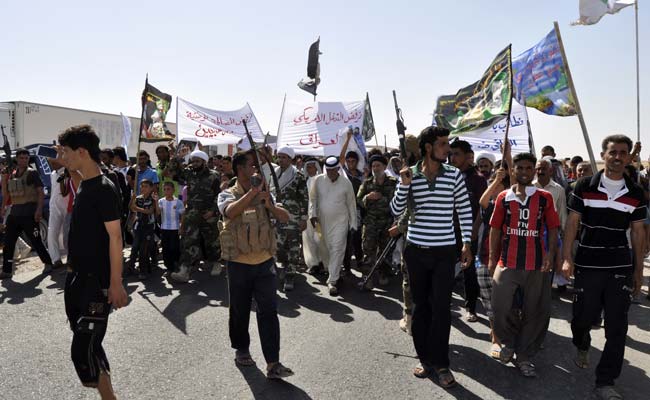 Baghdad: The United States has conducted an escalating campaign of deadly airstrikes against the extremists of the Islamic State for more than a month. But that appears to have done little to tamp down the conspiracy theories still circulating from the streets of Baghdad to the highest levels of Iraqi government that the CIA is secretly behind the same extremists that it is now attacking.

"We know about who made Daesh," said Bahaa al-Araji, a deputy prime minister, using an Arabic shorthand for the Islamic State, on Saturday at a demonstration called by the Shiite cleric Muqtada al-Sadr to warn against the possible deployment of U.S. ground troops.

Sadr publicly blamed the CIA for creating the Islamic State in a speech last week, and interviews suggested that most of the few thousand people at the demonstration, including dozens of members of parliament, subscribed to the same theory. (Sadr is considered close to Iran, and the theory is popular there as well.)

When an American journalist asked Araji to clarify if he blamed the CIA for the Islamic State, he retreated: "I don't know. I am one of the poor people," he said, speaking fluent English and quickly stepping back toward the open door of a chauffeur-driven SUV. "But we fear very much. Thank you!"

The prevalence of the theory in the streets underscored the deep suspicions of the U.S. military's return to Iraq more than a decade after its invasion, in 2003. The casual endorsement by a senior official, though, was also a pointed reminder that the new Iraqi government may be an awkward partner for the U.S.-led campaign to drive out the extremists.

The Islamic State has conquered many of the predominantly Sunni Muslim provinces in Iraq's northeast, aided by the alienation of many residents to the Shiite-dominated government of the former prime minister, Nouri al-Maliki. President Barack Obama has insisted repeatedly that U.S. military action against the Islamic State depended on the installation of a more inclusive government in Baghdad, but he moved ahead before it was complete.

The parliament has not yet confirmed nominees for the crucial posts of interior or defense ministers, in part because of discord between Sunni and Shiite factions, and the Iraqi news media has reported that it may be more than a month before the posts are filled.

The demonstration Saturday was the latest in a series of signals from Shiite leaders or militias, especially those considered close to Iran, warning the United States not to put its soldiers back on the ground. Obama has pledged not to send combat troops, but he seems to have convinced few Iraqis.

Shiite militias and volunteers, he said, were already answering the call from religious leaders to defend Iraq from the Islamic State without American help.

"This is how we do it," he said, adding that the same forces would keep U.S. troops out. "The main reason Obama is saying he will not invade again is because he knows the Islamic resistance" of the Shiite militias "and he does not want to lose a single soldier."

The leader of the Islamic State, for his part, declared Saturday that he defied the world to stop him.

"The conspiracies of Jews, Christians, Shiites and all the tyrannical regimes in the Muslim countries have been powerless to make the Islamic State deviate from its path," the leader, Abu Bakr al-Baghdadi, declared in an audio recording released over the Internet, using derogatory terms from early Islamic history to refer to Christians and Shiites.

"The entire world saw the powerlessness of America and its allies before a group of believers," he said. "People now realize that victory is from God, and it shall not be aborted by armies and their arsenals."

Many at the rally in Baghdad said they welcomed airstrikes against Baghdadi's Islamic State but not U.S. ground forces, the position that Sadr has taken.

Many of the 30 lawmakers backed by Sadr - out of a parliament of 328 seats - attended the rally.

Sadr's supporters opposed al-Maliki, the former prime minister, and many at the rally were quick to criticize the former government for mistakes like failing to build a more dependable army.

"We had a good army, so where is this army now?" asked Waleed al-Hasnawi, 35. "Maliki gave them everything but they just left the battlefield."

But few if any blamed al-Maliki for alienating Sunnis, as U.S. officials assert, by permitting sectarian abuses under the Shiite-dominated security forces.

Omar al-Jabouri, 31, a Sunni Muslim from a predominantly Shiite neighborhood of Baghdad who attended the rally and said he volunteers with a Shiite brigade, argued that al-Maliki had alienated most Iraqis, regardless of their sect.

Promoted
Listen to the latest songs, only on JioSaavn.com
"He did not just exclude and marginalize the Sunni people; he ignored the Shiite people, too," Jabouri said. "He gave special help to his family, his friends, people close to him. He did not really help the Shiite people, as many people think."