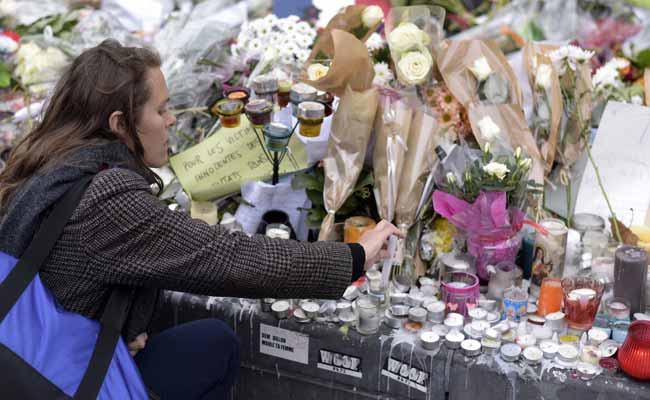 A woman lights a candle at a memorial for the victims of the attacks claimed by Islamic State which killed at least 129 people and left more than 350 injured, on November 17, 2015 at the Place de la Republique in Paris. (AFP Photo)

Paris: Quivering hostages, burning money and the moans of the wounded: harrowing new eyewitness details from the stand-off at the deadliest scene of the Paris terror attacks emerged Tuesday.

"Do you hear their cries, their suffering? It's to make you feel the fear that the people in Syria feel everyday," a hostage identified as Sebastian told La Provence newspaper, recounting the attackers' words.

"This is war. And it is just the beginning. We will kill the innocent!" recalled the survivor, who has become a local hero for saving the life of a pregnant woman trapped in the chaos.

For over an hour the people who survived the initial burst of violence at the Bataclan concert hall, where 89 were killed, were held hostage by three jihadist gunmen.

Every word or gesture carried the risk of provoking the attackers to open fire again.

The terrified concert-goers listened -- and were forced to agree -- as the assailants' preached and asked the hostages' approval for the killing.

"They asked us if we agreed with them. I'll let you imagine the lingering silence of that moment," Sebastian told RTL radio. "The most timid nodded their heads and the most daring said 'Yes.'"

According to Sebastian's account, the attackers seemed disorganised and ill-prepared. When the assailants spoke with a police negotiator on one of the hostages' phones they had no real demands, except for the authorities to stay back.

One of their Kalashnikovs was patched up with black tape.

While the assailants threatened to kill a hostage every five minutes and dump the corpse out a window, they also allowed firefighters into the building to remove some of the wounded.

"They asked us to serve as look outs, to yell at the police to stay back and that if not they would blow up their explosive vests, which they didn't have," said Sebastian, contradicting authorities' claims the attackers blew themselves up.

And as police surrounded the building in a trendy east Paris neighbourhood, the shooters forced the hostages to call reporters at French TV stations, but no one managed to reach anyone.

At one point the attackers asked Sebastian if he had a lighter and then whether he thought money was important, sensing what they wanted to hear, he said "No."

"They took out a wad of 50-euro bills and I had to burn them," Sebastian said.

"The other hostages thanked me for not trying to be a hero. The real heroes are dead, they died protecting others."

Sebastian said he spoke up at one point, making a joke about putting on a shirt because he was cold. One of the assailants did not find it funny.

"Much like a strict teacher he told me that I was starting to annoy him," Sebastian said.

Yet the very fact the attackers were talking and not shooting soon made the hostages realise how lucky they were.

"Once he started to speak I realised that maybe I was destined to live because it would have been so easy to kill me," Sebastian told RTL. "I was at his mercy... but it was also the beginning of my hope as paradoxical as it may seem."

Rescue arrived when French security forces stormed the venue, breaching an entrance that was blocked by a human chain of hostages. In moments it was over, he was safe.

"I now realise that every moment I spend with my loved ones is a bonus, a blessing," Sebastian said.