57 Killed, 119 Injured In Suicide Attack At Election Centre In Kabul

The assaults in Kabul underscore growing concerns about security in the lead-up to legislative elections scheduled for October 20, which are seen as a test-run for next year's presidential poll in Afghanistan. 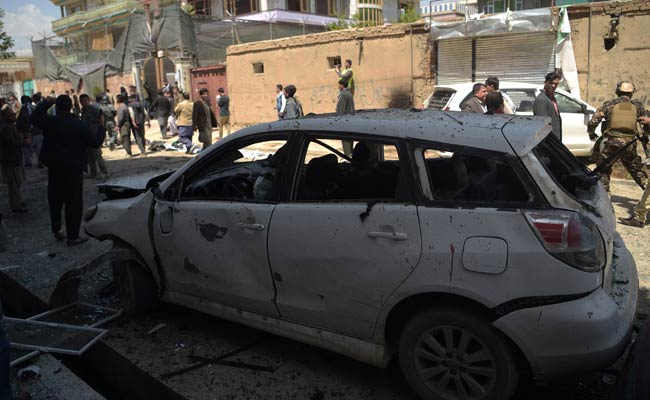 Kabul, Afghanistan: An Islamic State suicide bomber killed at least 57 people including women and children and wounded 119 outside a voter registration centre in the Afghan capital Kabul on Sunday in the latest attack on election preparations.

The assaults underscore growing concerns about security in the lead-up to legislative elections scheduled for October 20, which are seen as a test-run for next year's presidential poll.

There were anguished and angry scenes at Isteqlal Hospital where many of the victims were taken, with relatives criticising the Afghan government for failing to protect their loved ones.

"Our patience is running out. This government should take responsibility for the lives of all these innocent people lost every day," a man called Hussain, whose cousin was wounded in the blast, told AFP.

"Nobody will go to vote anymore."

The health ministry gave the latest toll for the attack, which was claimed by the Islamic State group via its propaganda arm Amaq.

The interior ministry had earlier said 48 people were killed and 112 wounded. Its spokesman was not immediately available to comment on the new toll.

The centre in a heavily Shiite-populated neighbourhood in the west of the city was also being used by people to register for national identification certificates, which they need in order to sign up to vote.

"I found myself covered in blood, with dead people -- women and children -- around me," said Ali Rasuli, who had been standing in a queue outside the centre when he saw a "fireball" in front of him. He was taken to hospital with leg and abdominal wounds.

Sheets of paper and passport-sized photos lay scattered amid shattered glass and pools of blood on the street near badly damaged cars -- grim evidence of the force of the blast.

"This senseless violence shows the cowardice and inhumanity of the enemies of democracy and peace in Afghanistan," US ambassador John Bass wrote on Twitter. NATO and the United Nations also condemned the bombing.

The last major attack in Kabul was on March 21 when an IS suicide bomber blew himself up in a crowd celebrating the Persian New Year holiday and killed at least 33 people. A wounded Afgan resident brought to the Isteqlal Hospital following a suicide bombing attack in Kabul.

A wounded man in a hospital bed wept as he told the network: "I don't know where my daughters are. God damn the attackers!"

A witness to the attack named Akbar told Tolo TV: "Now we know the government cannot provide us security: we have to get armed and protect ourselves."

Elsewhere, a roadside explosion in the northern province of Baghlan on Sunday killed six people, including three women and two children.

Officials have acknowledged that security is a major concern because the Taliban and other militant groups control or contest large swathes of the country.

Afghan police and troops have been tasked with protecting polling centres, even as they struggle to get the upper hand against insurgents on the battlefield.

Militants on Friday launched rockets at a voter registration centre in the northwestern province of Badghis, killing a police officer and wounding another person.

Officials blamed the Taliban for the attack.

Over the next two months, authorities hope to register up to 14 million adults at more than 7,000 polling centres for the parliamentary and district council elections.

Officials have been pushing people to register amid fears a low turnout will undermine the credibility of the polls.

Since the Persian New Year attack a tense calm had permeated the Afghan capital as people brace for the Taliban's launch of its customary spring offensive.

The Taliban are under pressure to take up Ghani's peace offer made in February but so far the group has given only a muted response.

Some Western and Afghan officials expect 2018 to be a particularly bloody year.

General John Nicholson, the top US and NATO commander in Afghanistan, told Tolo TV last month that he expected the Taliban to carry out more suicide attacks this fighting season.

(Except for the headline, this story has not been edited by NDTV staff and is published from a syndicated feed.)
Comments
KabulKabul Voter Registration CentreKabul suicide attack