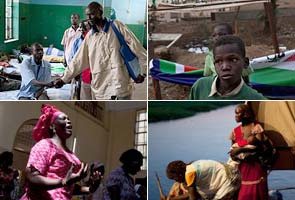 Juba, Sudan: Polls closed in the Southern Sudan capital of Juba on Sunday, on the first day of voting in a week-long independence referendum likely to create the world's newest nation, about five years after the end of a brutal civil war there.

The mainly Christian south is widely expected to secede from the mainly Muslim north, splitting Africa's largest country in two.

Turnout in the southern capital of Juba appeared robust early in the seven-day process, and voters were excited about charting a new course.

Southerners, who mainly define themselves as African, have long resented their underdevelopment, accusing the northern Arab-dominated government of taking their oil revenues without investing in the south.

The president of Sudan, Omar al-Bashir, who has been indicted for alleged genocide and war crimes in Darfur, has promised to let go of the oil-rich south after his government had tried for years to derail the vote now taking place under massive international scrutiny.

Sudan, geographically the largest country on the continent, will lose a third of its land, nearly a quarter of its population, and much of its oil if the south secedes.

Khartoum's only consolation will be that the pipelines to get the product to market all run through its territory.

This week's referendum is part of a 2005 peace deal that ended the two-decade civil war between the north and south.

The north and south still need to negotiate the distribution of oil revenues, rights to the White Nile River, official borders and citizenship rights.

Full independence wouldn't take place before July 9, when the 2005 Comprehensive Peace Agreement, or CPA, expires and a new agreement must take its place.

A simple majority must vote for separation for the referendum to pass, but 60 percent of registered voters must cast ballots for the vote to be valid.