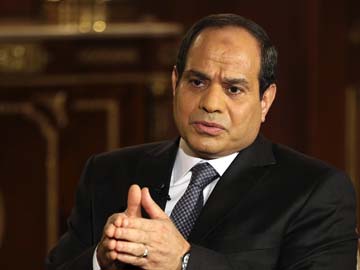 gypt's presidential candidate and former army chief Abdel Fattah Al Sisi gestures during an interview with Reuters in Cairo on May 14, 2014.

Cairo: Egyptians vote this week in a presidential election which former army chief Abdel Fattah al-Sisi, who ousted the elected Islamist leader, is expected to easily win amid calls for stability.

The election on Monday and Tuesday caps more than three years of political turmoil that has seen two presidents ousted following mass protests, thousands killed in clashes and militant attacks, and an economy left in tatters.

The now retired field marshal is expected to trounce his only rival, leftist leader Hamdeen Sabbahi, amid calls for a strong leader who can restore stability in the Arab world's most populous country.

But true democracy, the ideal millions rallied and fought for in a 2011 uprising that overthrew strongman Hosni Mubarak, will have to wait, perhaps for a couple of decades, Sisi has said.

Instead, he says he will work hard to restore the economy and fight "terrorism".

Sisi has called for a high turnout in the election, billed by the military-installed authorities and the West as a milestone toward elected rule in the country of 86 million people.

"You need to go down now more than any other time in (the country's) history. Go down, show to the entire world that there are 40, 45 (million) or even more" voters casting their ballots, Sisi said as campaigning closed on Friday.

The military and police are being deployed heavily to secure polling stations across the country, which saw a surge in militant attacks after Morsi's overthrow.

On Sunday, the jihadist group responsible for the deadliest attacks on soldiers and police denied a top commander had been killed in an ambush, as reported by security officials.

Ansar Beit al-Maqdis said Shadi al-Menei was still alive, and it published a picture on Islamist Internet forums showing the militant reading a report about his "death" on a laptop.

The picture could not be immediately authenticated.

With the economy a shambles, and sporadic bloodshed on the streets and in militant attacks, Sisi has said voters will have to prioritise stability over democratic reforms.

Sisi's sole election rival Sabbahi, a veteran dissident, has vowed to defend the democratic aspirations of the 2011 revolt.

"We swear to God that symbols of corruption and despotism (from the Mubarak era) will not return," he said in a Cairo speech on Friday.

But indicating that he will not tolerate protests, Sisi has raised fears that Egypt could see more repression than under Mubarak's regime.

"What tourist would come to a country where we have demonstrations like this?" he asked Egyptian newspaper editors.

"You write in the newspapers: 'No voice is louder than freedom of speech!' What is that?" he asked.

The interim authorities have justified the overthrow of Morsi by saying the army heeded mass street protests against the divisive Islamist's one-year rule.

Since Morsi's overthrow, police have cracked down on his Muslim Brotherhood, which had swept all elections since the fall of Mubarak.

Sisi pledges that the Brotherhood, now blacklisted as a terrorist group, would cease to exist under his presidency.

The crackdown has cost at least 1,400 lives over the past 11 months, including hundreds of pro-Morsi protesters killed on a single day last August when security forces demolished their street camps in Cairo.

Promoted
Listen to the latest songs, only on JioSaavn.com
Meanwhile, influential Egypt-born cleric Yusef al-Qaradawi, issued a fresh call to boycott the poll.

"Don't take part in electing a man who is soaked from head to toe in the blood of innocents," the Qatar-based backer of the Muslim Brotherhood said in a statement.