Trump sounded an unmistakable threat to the new Democratic House majority over impending oversight investigations into his conduct and personal finances, as well as alleged corruption in the administration. Trump's speech came at one of the most acrimonious moments of his presidency.

President Donald Trump confronted a divided Congress for the first time Tuesday night by delivering a dissonant State of the Union address, interspersing uplifting paeans to bipartisan compromise with chilling depictions of murder and ruin.

Calling the situation at the U.S.-Mexico border "an urgent national crisis," Trump again called on Congress to approve construction of his long-promised wall - and argued that without the physical barrier, working-class Americans would lose their jobs and grapple with dangerous crime and overcrowded schools and hospitals.

Trump also sounded an unmistakable threat to the new Democratic House majority over impending oversight investigations into his conduct and personal finances, as well as alleged corruption in the administration. The president warned that everyday Americans may suffer from what he termed "ridiculous" probes.

"An economic miracle is taking place in the United States - and the only thing that can stop it are foolish wars, politics or ridiculous partisan investigations," Trump said. "If there is going to be peace and legislation, there cannot be war and investigation."

As he delivered his speech from the rostrum of the House chamber, with a stone-faced Speaker Nancy Pelosi, D-Calif., observing over his left shoulder, Trump stared into a sea of Democratic women wearing bright white in tribute to suffragists who secured women's right to vote. Together, they formed a vivid illustration of this year's power shift and the potential political peril for Trump's presidency.

The tension in the chamber was palpable. As Trump declared the State of the Union to be "strong," the women in white stayed seated while Republican lawmakers, most of them men in dark suits, stood to cheer.

Rare moments of joint applause came when Trump touted the bipartisan criminal justice law he signed in December, vowed to fight childhood cancer and committed to eliminating HIV in 10 years.

Trump began and ended his 82-minute speech with a unifying tone that was in conflict with many of his own actions and statements, especially over the past month, one of the more contentious of his presidency.

A president who proudly retaliates against his enemies, taunts his political foes with nicknames and considers himself one of the world's great counter-punchers exhorted Congress to "reject the politics of revenge, resistance and retribution and embrace the boundless potential of cooperation, compromise and the common good." Trump added: "We must choose between greatness or gridlock, results or resistance, vision or vengeance, incredible progress or pointless destruction. Tonight, I ask you to choose greatness."

Just eight hours earlier, Trump trashed Democrats - as well as the late Republican senator John McCain - at a freewheeling lunch with television news anchors. He assailed Senate Minority Leader Charles Schumer, D-N.Y., as a "nasty son of a bitch," ridiculed former vice president Joe Biden as "dumb" for his history of gaffes, and accused Virginia Gov. Ralph Northam, D, of "choking like a dog" at a news conference where he denied being in a racist photo on his medical school yearbook page, according to two attendees and a person briefed on the discussion.

It is an annual tradition for presidents to host news anchors for an off-the-record lunch on the day of their State of the Union speech, but Trump did more than preview his address. He held forth with stream-of-consciousness commentary - including about McCain, who died of cancer last year. The president remarked that the late senator's final book, a capstone to his life in public service, "bombed."

Trump's speech came at one of the most acrimonious moments of his presidency. Both parties are deeply divided over his demand to construct a border wall - and leaders still are reeling from the partial government shutdown that ended late last month, which at 35 days was the longest in U.S. history.

The battle over Trump's wall at the U.S.-Mexico border is ongoing. With Democrats refusing to meet his demand for construction money - which Trump had long said would come from Mexico - the president is on the cusp of declaring a national emergency in an attempt to reallocate other federal funds, including perhaps from the Pentagon, to build the wall without approval from Congress.

Though he made no mention of an emergency declaration in his Tuesday night speech, Trump said in recent days that he has "set the stage" for one, while administration lawyers are preparing for immediate legal challenges.

Lawmakers from both sides of the aisle have voiced their opposition to Trump's national emergency idea. Congress has until Feb. 15 to reach a deal to avert a second government shutdown, but Democrats have said they won't offer funding for Trump's wall, and the president has said he doesn't expect much from the negotiations.

The president Tuesday sought to paint undocumented immigrants who cross the southern border, often seeking asylum, as an invading force prone to violent crime. "As we speak, large, organized caravans are on the march to the United States," Trump said, adding that he "just heard" that Mexican cities were trying to rid their communities of migrants by directing truckloads of them to areas along the border where there is little protection. 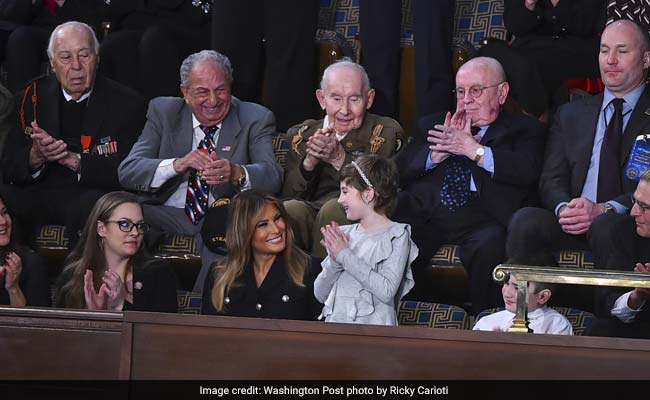 "This is a moral issue," Trump said. "The lawless state of our southern border is a threat to the safety, security and financial well-being of all Americans." He added, "Tolerance for illegal immigration is not compassionate. It is actually very cruel."

Illegal border crossings are down significantly from their historic peaks, and some research indicates that undocumented immigrants commit crimes at lower rates than U.S. citizens do. Still, Trump has claimed that only a border wall would be effective in keeping out the migrants, many of whom are families with children.

This was Trump's third address to Congress as president and his first since Democrats retook control of the House last month. The address was delayed from its original date in January because of the shutdown.

Facing the president as he delivered his speech was the most diverse Congress in U.S. history, with the record number of women - mostly Democrats - who swept into office during the midterm elections seen as a rebuke to Trump's pugilistic governing style.

When Trump sought to praise his administration for the growth in new jobs for women, the record class of Democratic congresswomen seized on the irony.

"No one has benefited more from our thriving economy than women, who have filled 58 percent of the new jobs created in the last year," Trump said.

In response, Democrats applauded loudly, high-fiving each other and punching the air.

"You weren't supposed to do that," Trump said, veering from his prepared remarks.

At that, many Democratic women took a bow, including Rep. Alexandria Ocasio-Cortez of New York, who has called Trump a racist, and Rep. Rashida Tlaib of Michigan, who has called for the president's impeachment. 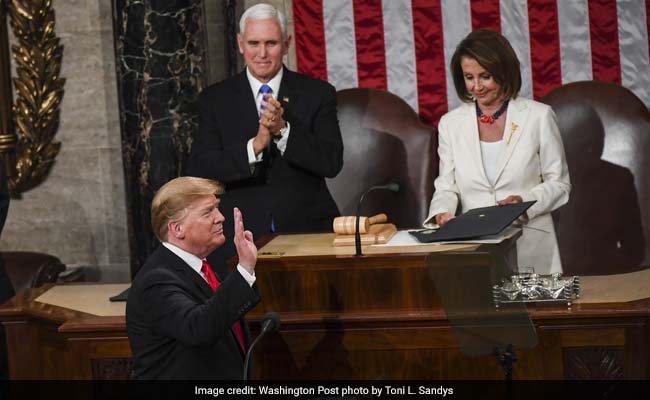 Trump's speech was notable for what he did not mention - including the ballooning federal debt.

"Don't sit yet, you're going to like this," Trump told them, going on to congratulate them for the record number of women serving in Congress one century after women secured the right to vote.

Stacey Abrams, the Democratic gubernatorial candidate defeated in Georgia last year, gave her party's response. She highlighted her hardscrabble upbringing and values of cooperation and camaraderie, saying, "We do not succeed alone" and promising "a better America."

Speaking from an Atlanta union hall, Abrams also delivered a stern scolding of Trump: "The shutdown was a stunt engineered by the president of the United States, one that defied every tenet of fairness and abandoned not just our people - but our values."

Trump used his speech to defend his "America First" foreign policy, which has rattled Western allies and sparked some backlash within his party. Several Republican lawmakers have publicly criticized the president's recent decision to pull troops out of Syria, for instance.

The president also touted his relationship with North Korean leader Kim Jong Un and announced that he would hold his second summit with the dictator on Feb. 27 and 28 in Vietnam.

"If I had not been elected president of the United States, we would right now, in my opinion, be in a major war with North Korea," Trump said. "Much work remains to be done, but my relationship with Kim Jong Un is a good one."

Trump's remarks highlighted just how much has changed in the past year. During his 2018 State of the Union address, Trump decried the "depraved character" of the North Korean regime and highlighted its torturous practices.

On Tuesday, Trump made no mention of North Korea's human rights abuses or other atrocities.

Trump did not shy away from his braggadocios instincts, spending several minutes in his speech highlighting his accomplishments during his first two years in office, including job growth, the tax cut bill, reduced regulations and a manufacturing resurgence.

In a message aimed at his conservative base, Trump took on the issue of abortion, seizing on comments last month by Northam and recharacterizing them as an explicit endorsement of infanticide.

"We had the case of the governor of Virginia where he stated he would execute a baby after birth," Trump said, mischaracterizing Northam's comments. ". . . I am asking the Congress to pass legislation to prohibit the late-term abortion of children who can feel pain in the mother's womb."

Northam was discussing a bill that would, like current law, allow abortions up to the point of delivery in cases when the mother's life or health was at serious risk. Northam said in a WTOP interview that a baby's mother and her doctor would have "a discussion'' about what to do after the child's birth, and his aides said he was speaking about what kind of care to provide the newborn - not infanticide.

Trump's speech was notable for what he did not mention - including the ballooning federal debt, once a centerpiece of the Republican agenda, nor did he talk about Social Security, Medicare or other entitlements.

The president also did not say anything about the Middle East peace plan his son-in-law and senior adviser, Jared Kushner, has been working on.

And almost a year after 17 students were killed at a Florida high school - one of several mass shootings in 2018 - Trump did not mention any steps to counter the nation's gun violence.

During his speech Trump made reference to guests seated in the gallery with first lady Melania Trump. They included family members of a Nevada couple allegedly killed last month by an undocumented immigrant, a woman recovering from opioid addiction and a middle-school student named Joshua Trump who, according to the White House, had been bullied because of his last name.

Democrats also tried to send political messages with their guests, including air traffic controllers and other federal employees who were furloughed during the shutdown; a sexual assault survivor; a climate change scientist; and an employee at one of Trump's golf clubs who was fired for being an undocumented immigrant.