The Women In White, Seated Together At Trump's State Of The Union Address

House Speaker Nancy Pelosi led many in her caucus in wearing white to honor the fight for suffrage rights, which women earned 100 years ago in the United States. 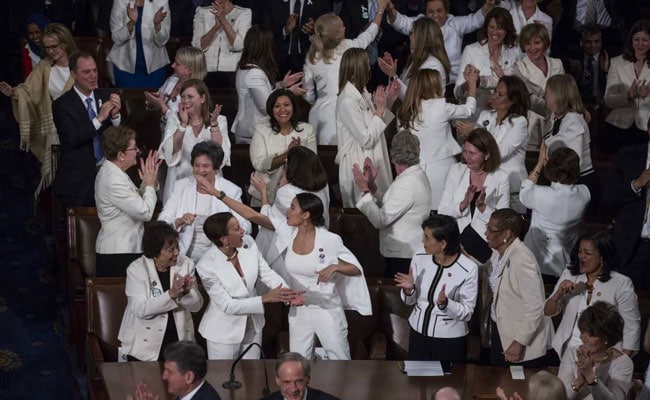 Seated together, the bloc of women lawmakers sent a striking visual message to Donald Trump

The women in white -- several dozen Democratic lawmakers -- sat en bloc Tuesday in unmistakable defiance of President Donald Trump while he delivered his State of the Union address.

House Speaker Nancy Pelosi, Trump's arch rival in Washington who sat behind him on the dais, led many in her caucus in wearing white to honor the fight for suffrage rights, which women earned 100 years ago in the United States.

Seated together, the bloc of women lawmakers sent a striking visual message, a challenge to Trump and how he and his administration have addressed issues important to women, such as equal pay, health care, and the treatment of the immigrant families. 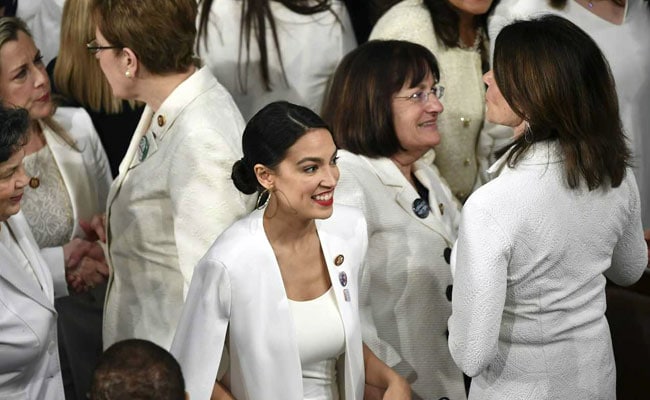 "Tonight the @HouseDemWomen are wearing suffragette white to remind the president that we -- and the rights our ancestors fought for -- aren't going anywhere," tweeted House Democrat Val Demings.

Early in the speech, as Trump declared the state of the union to be "strong" and said the country was enjoying an "unprecedented economic boom," some Democrats in white sat on their hands.

When Trump spoke of the "boundless potential of cooperation, compromise, and the common good," it drew Republicans and some Democrats to their feet, but lawmakers including Alexandria Ocasio-Cortez, the 29-year-old liberal rising star from New York, sat stone-faced. 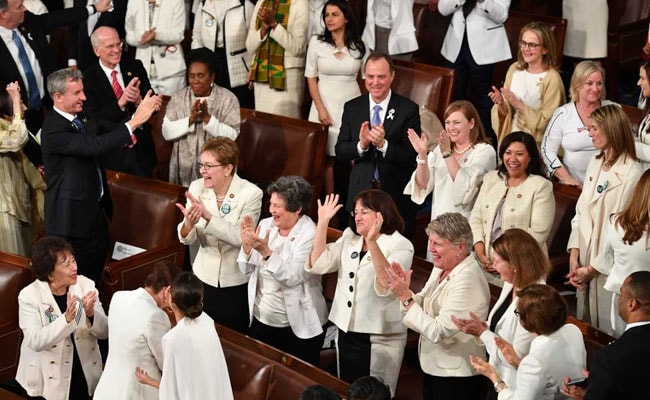 Congresswomen, dressed in white, applaud as they attend the State of the Union address

When he called on Congress to pass legislation to ban late-term abortions, again there was stillness among the women in white.

But the silent treatment did not last long.

After the president noted that women filled 58 percent of all new jobs last year, and then congratulated them for having broken the record for the most women in Congress, they jumped to their feet and erupted in applause, some pumping their fists and cheering.

"You weren't supposed to do that!" Trump quipped, visibly amused.

Before Trump began his speech, many of the women gathered in the aisle on the Democratic side of the House chamber, posing for photographs and celebrating their record strength in numbers: 102 women in the 435-seat House of Representatives, and 25 women in the 100-member Senate.

When Trump congratulated their achievement, it appeared to lighten the air.

"I think there was an incredible moment when he acknowledged the new wave of women, the historic number of women elected to Congress, and I think a lot of us were celebrating that," Rashida Tlaib, one of the first two Muslim women members of Congress, told AFP. 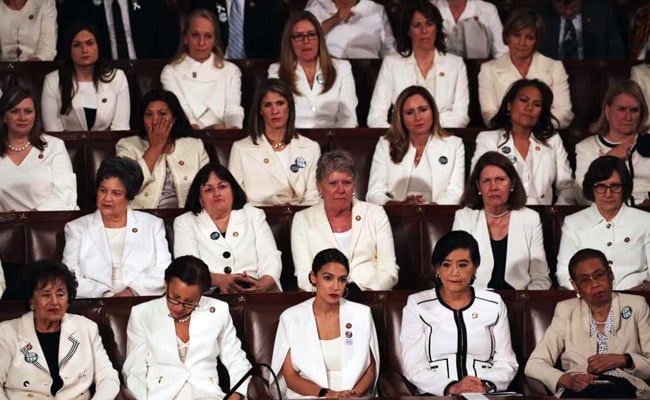 As Trump spoke of bipartisan cooperation, the women lawmkers of the Democratic party sat stone-faced.

Trump gave shout outs to several guests in the upper gallery, including Apollo 11 astronaut Buzz Aldrin, who in July will celebrate 50 years since setting foot on the Moon.

He also welcomed 10-year-old Grace Eline, who was diagnosed with brain cancer last year and raised money for the fight against cancer.

The women in white rose as one to salute her.

"Grace, you are an inspiration to us all," Trump said. The beaming young girl waved back.

Also in the chamber Tuesday was Holocaust survivor Joshua Kaufman, a prisoner at Dachau concentration camp. Seated next to him was Herman Zeitchik, who stormed the beaches of Normandy in World War II and helped liberate Dachau.

"He was one of the Americans who helped rescue Joshua from that hell on earth," Trump said, as the chamber broke into applause.