State of Emergency Set in Ferguson After Shooting Anniversary Violence 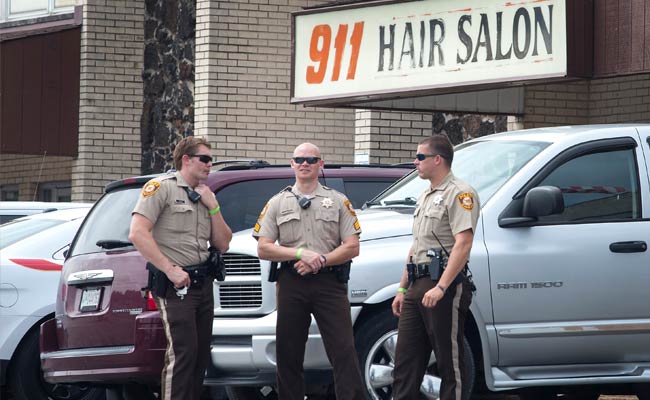 Police stand guard during a demonstration to mark the first anniversary of the shooting of Michael Brown on August 10, 2015 in Ferguson, Missouri. (AFP Photo)

Ferguson: Authorities declared a state of emergency in Ferguson, Missouri, after gunfire erupted on the anniversary of a high-profile police shooting and prosecutors on Monday charged an 18-year-old man with assault on officers.

The man, Tyrone Harris, was critically wounded in an exchange of gunfire with police on Sunday night as people marked the shooting death one year ago of unarmed black man Michael Brown by a white officer in Ferguson, a suburb of St. Louis.

Police said Harris was being treated in hospital. They said St. Louis County prosecutors charged Harris, whose bond was set at $250,000, on four counts, including "assault on law enforcement" and shooting at a motor vehicle.

The violence, which also included a drive-by shooting and police being pelted with objects, prompted St. Louis County to declare a state of emergency.

"In light of last night's violence and unrest in the City of Ferguson, and the potential for harm to persons and property, I am exercising my authority as county executive to issue a state of emergency, effective immediately," County Executive Steve Stenger said in a statement.

On a day of civil disobedience called by activists in Missouri on Monday, several people were arrested after jumping barricades at a courthouse in St. Louis, news video reports showed.

Clergy and civil rights groups led the rally of more than 100 people through city streets, shouting, "This is what democracy looks like" and "Black lives matter."

On Sunday night in Ferguson, volleys of gunshots rang out as police in riot gear tried to disperse demonstrators blocking traffic and smashing storefront windows along a street that was a flashpoint of riots last year after Brown, 18, was shot dead.

Nixon, who had deployed the National Guard to quell violence last year, did not make any mention of additional security for rallies on Monday planned in and around Ferguson.

"For the sake of all, it is my hope and expectation that today's events will be peaceful so that these efforts can continue to move the region in a positive direction," he said.

The death of Brown and a grand jury's decision to spare the officer, Darren Wilson, from criminal charges led to a wave of demonstrations that boiled over into rioting and arson at times and spawned sympathy rallies across the United States.

Brown's death also prompted greater scrutiny of racial bias within the US criminal justice system, giving rise to the "Black Lives Matter" movement that gained momentum from other high-profile killings of unarmed minorities by white police in cities such as New York, Baltimore, Los Angeles, Cincinnati and most recently Arlington, Texas..

"It was a poor decision to use plain clothes officers in a protest setting because it made it difficult for people to identify police officers, which is essential to the safety of community members," said Kayla Reed, a field organizer with the Organization of Black Struggle.

In Ferguson on Sunday night, police said the gunfire began with two groups of agitators apparently shooting at each other before one gunman darted across a parking lot and was confronted by four officers who pulled up in an unmarked vehicle.

The suspect then opened fire on the police vehicle and was badly wounded in the ensuing foot chase and exchange of gunshots with the four detectives, police said.

Belmar said early Monday that police estimated more than 40 rounds had been fired.

The shooters "were criminals; they weren't protesters," he said. "We can't sustain this as a community," he said adding, "We can't afford to have this kind of violence. It's untenable at this point".

The violence was in marked contrast to a day of mostly subdued, peaceful commemorations in Ferguson and elsewhere.

In March, the Justice Department released a report that said systemic racial bias targeted blacks and created a "toxic environment" in Ferguson. A federal review of Brown's death found that Wilson had acted lawfully.
© Thomson Reuters 2015