On Thanksgiving, US Cop Gets Starbucks Order With "Pig" Written On Cup

Starbucks representative Jory Mendes called the incident "totally unacceptable" and "not representative of the deep appreciation we have of officers who work to keep our communities safe". 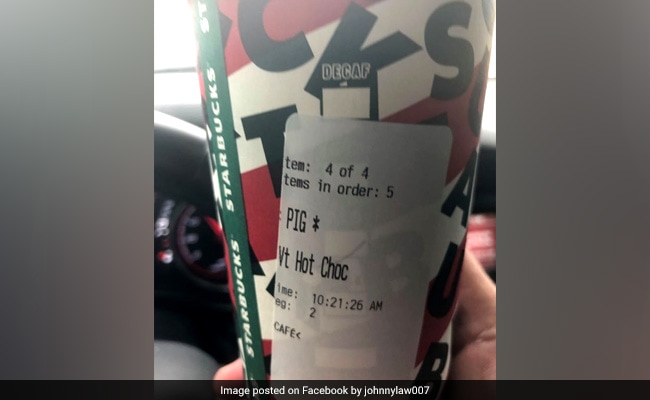 The label on one of the cups - a Venti hot chocolate - read: "PIG."

On Thanksgiving Day morning, an Oklahoma police officer decided to do something nice for the emergency dispatchers working the holiday shift with him. And so he drove to his local Starbucks and ordered them all drinks.

According to a Facebook post Thursday by Kiefer Police Department Chief Johnny O'Mara, when the officer received the order, the label on one of the cups - a Venti hot chocolate - read: "PIG."

O'Mara contacted the Starbucks in Glenpool, Oklahoma, to complain and was told the store would happily replace the beverage with a correct label - which was not the apology he had sought.

"The proverb 'Fool me once, shame on you. Fool me twice, shame on me' came to mind," he wrote on the social media platform, attaching a photo of the mislabeled cup.

"What irks me is the absolute and total disrespect for a police officer who, instead of being home with family and enjoying a meal and a football game, is patrolling his little town," O'Mara said, attributing the "derogatory" remark to a broader contempt for law enforcement.

The "cup of coffee for a 'pig,'" he said, was "another tiny pinprick into the heart of men and women who are asking themselves more often: 'Why am I doing this?'"

Starbucks representative Jory Mendes called the incident "totally unacceptable" and "not representative of the deep appreciation we have of officers who work to keep our communities safe" in a phone interview Friday with The Post.

"We are deeply sorry to the law enforcement officer who experienced this," he said, adding that the company has spoken directly to the officer involved.

Starbucks has also launched an internal investigation and the employee has been suspended pending its outcome.

O'Mara could not immediately be reached for comment but told ABC affiliate WXYZ Detroit that the barista had apologized and said the label was a joke that was only meant to be seen by a colleague.

"Just pour the coffee, please," wrote the police chief. "Are we at a point where a task as simple as pouring an exceptionally overpriced cup of coffee is so complicated that it cannot be accomplished without 'expressing oneself?'"

He signed off the post thanking his officers for risking their lives over Thanksgiving. O'Mara continued, "Stay safe; go home."

(Except for the headline, this story has not been edited by NDTV staff and is published from a syndicated feed.)
Comments
StarbucksCoffee cupPIG