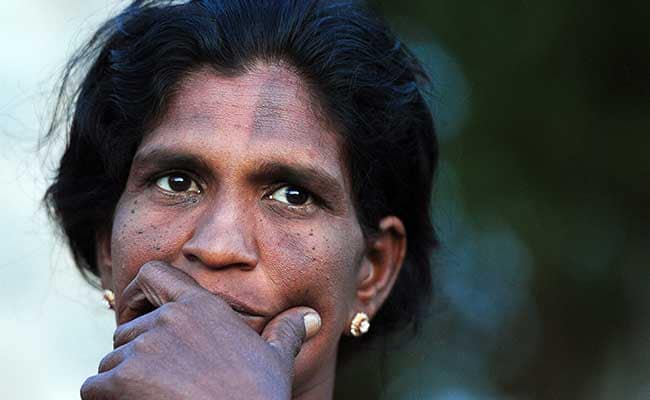 In this photograph taken on June 9, 2015, Sri Lankan war widow Evin Selvy, 45, listens to a question from an AFP journalist during an interview in Jaffna, some 400 kilometres (250 miles) north of the capital Colombo. (Agence France-Presse)

Jaffna, Sri Lanka: Shunned, destitute and pushed into prostitution in some cases, Sri Lanka's Tamil widows have returned to northern Jaffna since the end of the separatist war only to discover they are not welcome even in their homeland.

Now, six years after the war ended, the women who fled the fighting on the peninsula in their thousands are pinning their hopes on the nation's new president for a better future for their families.

"Widows are despised in our society," said Baskaran Jegathiswari, 50, fighting back tears at her home in Achchuveli village in Jaffna, heartland of Sri Lanka's ethnic Tamil minority.

"People look down on us. They think we bring bad luck," said Jegathiswari, who lost her husband to military shellfire just months before the war ended in 2009.

The women, whose husbands were killed or are officially still listed as missing, are closely watching President Maithripala Sirisena who took office in January pledging reconciliation to "heal broken hearts and minds".

Official figures show 27,000 widows head households in Jaffna, where the conflict was centred, while local politicians put the figure much higher.

"I can't think of rebuilding my life now," said widow Evin Selvy who struggles to feed her family, earning 500 rupees ($3.80) a day as a farm labourer.

"But I hope the new government will make it better for my three daughters."

Having taken refuge elsewhere in the north, Selvy returned to Jaffna in 2009 to find her home and the rest of her village destroyed in the fighting.

After grabbing just a handful of possessions, the 45-year-old had fled in 1990 with her husband, who was killed by military shelling in the war's final months.

She and her daughters now live in a hut thrown up alongside their house, which has been partly rebuilt with funding from an Indian government project for war victims. But they cannot afford the remaining 200,000 rupees needed to finish it.

At least 100,000 people were killed in the war between 1972 and 2009 when the military finally crushed Tamil rebels fighting for a separate homeland for the ethnic minority.

Thousands are still unaccounted for, including suspected rebels rounded up by security forces or who surrendered in the conflict's final phase and then disappeared.

Widows left behind say they feel vulnerable, with reports of physical abuse by members of their community. Others are ostracised, considered bad luck by the conservative Hindu society.

"A war with weapons ended in 2009 but a new social conflict has begun. Young war widows are most vulnerable," said a social worker helping widows in Jaffna, referring to domestic and other violence.

She refused to give her name.

Many struggle to find jobs and cannot make ends meet, with some forced into prostitution, according to another social worker, Dharshini Chandiran.

"Widows don't have a good place in our society," said Christine Manoharan, who heads a support group for 1,700 widows.

"Men demand sexual favours from us. We don't have any security," said Manoharan, 34, herself a widow.

Several widows told AFP that even family friends were trying to take advantage of their plight, seeking sex in return for financial or other assistance. Some told of being regularly propositioned when travelling alone on public transport in a country with relatively low crime rates.

Some are being coaxed by well-meaning members of the Tamil community to remarry to give them some security, said women's activist Mariarosa Sivarasa.

But some are also being targeted by criminals to leave their villages and work as prostitutes in larger towns, said Ananthi Sasitharan, 43, a member of the local Northern Provincial Council.

Despite all the problems Sasitharan said she was optimistic Sirisena would eventually take up their plight, with signs his government was moving towards reconciliation.

"He appears a simple person... I feel we can even call him directly to discuss any problem," Sasitharan told AFP.

Sirisena on Friday ordered the dismissal of parliament, clearing the way for a general election expected to be held in August, in a bid to strengthen his party's numbers and bolster his mandate for reform.

The government has started returning some land throughout the north to families whose property was seized by the military during the war.

Sirisena has also pledged a domestic inquiry into allegations by a UN panel of atrocities committed in the fighting, including the killing of thousands of civilians and sexual violence by soldiers.

Previous president Mahinda Rajapakse, an autocrat in power for a decade, rejected Western pressure for an investigation, saying no civilians were killed. He was accused of failing to unify Tamils with the majority Buddhist Sinhalese after the war.

Under Sirisena, restrictions have been relaxed on Jaffna's population, including easier travel to and from the peninsula which underwent immense reconstruction under Rajapakse.

Intelligence officers have halted their regular grilling and harassment of widows whom they suspected were still linked to remnants of the rebels.

But widows and the wider Tamil community argue there is still a long way to go, including meeting a key demand to remove large concentrations of troops still stationed in the north.

"We think the new president wants to change things," activist Sivarasa said. But after decades of suffering, a quick fix seems unlikely.