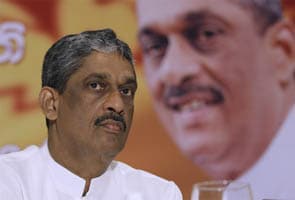 Colombo: Sri Lanka's war-hero Sarath Fonseka, who once commanded his troops against the LTTE, has been lodged in a solitary cell where he sleeps on a mat on the cement floor, attired in ill-fitting prison clothes.

Jailed on corruption charges, Fonseka, who was transferred from his detention centre on Thursday after President Mahinda Rajapaksa put his seal on his sentence, has been taken in as a regular prisoner.

"Fonseka, now Prisoner No: 0/22032, changed from a national dress into an ill-fitting jumper, the regular attire for convicts and slept the night on a mat on the cement floor. He had only one pillow," the Sunday Times newspaper said.

The 59-year-old former war hero whose sentence recommended by a court martial was confirmed by President Mahinda Rajapaksa, as the Commander in Chief of the Sri Lankan armed forces, was moved from detention at the Naval Headquarters to Welikada prison here.

On September 17, the second court martial against Fonseka, the leader of the opposition Democratic National Alliance (DNA), found him guilty of all four counts in a case related to the procurement of weapons by the army in violation of the tender procedures and recommended that he be jailed for up to three years.

According to a report though the Court Martial sentenced Fonseka to a rigorous jail term upto three years, the Sri Lankan President commuted it to 30-months.

Fonseka, who successfully led the Sri Lankan military in the war against the LTTE which ended in May last year, was charged with favouring a company headed by his son-in-law, who is also an accused in a separate case filed in the high court on the same charges.

Promoted
Listen to the latest songs, only on JioSaavn.com
"It was close upon midnight Thursday when former Army Commander Sarath Fonseka was escorted into an isolated cell in Ward "S" at the high security Welikada Prison," says the Sunday Times.

It says he was woken up at 5 am on Friday, like all other inmates in the block and though his cell had a toilet he complained the flush was not working.

He had to walk to a water tank outside the ward. There, he had to use a bucket to draw water to wash or bathe. Later, with a metal jug on one hand and a metal plate on the other, he stood in the queue with other convicts to be served breakfast.